In a previous post, we discussed the prevalence of and trends in alternative employment arrangements, sometimes called “contingent work,” in the U.S. labor market. Contingent work is jobs with employment arrangements other than the “traditional” full-time model, including workers with temporary contracts, independent contractors, day laborers, and part-time employees.

Depending on how one defines this group of workers, who are a diverse group but tend to enjoy less job stability and lower compensation, they comprise anywhere between 10 and 40 percent of the U.S. workforce, and this share increased moderately between 2000 and 2010. Of course, how many contingents there are, and how this has changed over time, varies quite drastically by industry, as well as by occupation. For example, in 1990, around 28 percent of staffing services employees (sometimes called “temps”) worked in blue collar positions, while 42 percent had office jobs. By 2009, these proportions had reversed, with 41 percent of temps in blue collar jobs and 23 percent doing office work. This is a pretty striking change.

Another industry/occupation in which there has been significant short term change in the contingent work share is among faculty and instructors in higher education institutions.

A 2014 descriptive analysis by the American Institutes for Research shows that the number of instructional faculty increased at all types of colleges and universities, in order to keep up with demand (i.e., increasing enrollment). Most of this growth, however, was in the form of newly hired part-time faculty and instructors (including graduate assistants).

As you can see in the chart below, which is taken directly from the report, the shares of part-time faculty and instructors (the dark and light purple portions of the bars) increased at every type of institution, by as much as eight percentage points (over a 12-year period). At the same time, the shares of full-time faculty decreased at all but research universities (public and private). 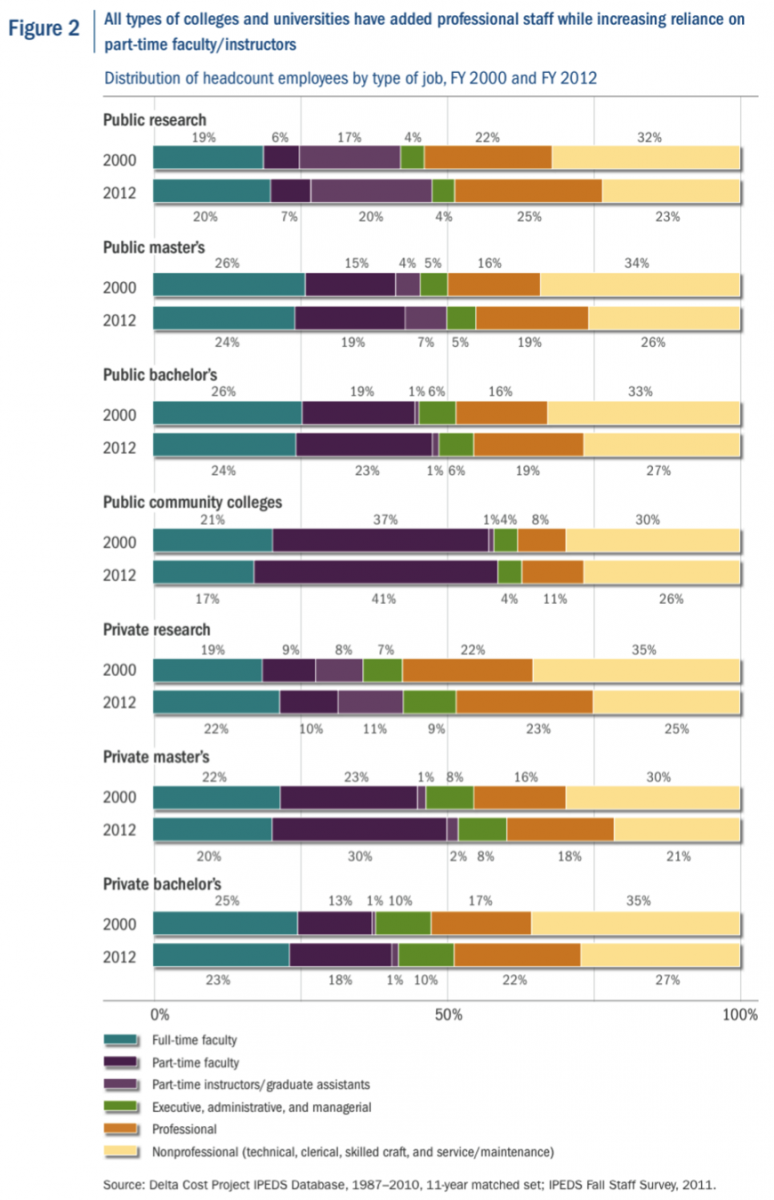 If this trend continues, it may end up causing a somewhat fundamental change in the employment relationships among faculty and instructors at U.S. colleges and universities.

And it has, of course, not gone unnoticed. There has been much discussion about the increasing reliance on adjunct and part-time faculty, and the decline in tenure-track positions, at U.S. institutions of higher education. These discussions not infrequently imply or state directly that the shift toward contingent employment in colleges and universities represent a decline in the quality of education students are receiving.

In any case, it is clear that colleges and universities are relying more and more heavily for teaching on positions that offer less compensation and stability, even as tuition increases rapidly.