New Teacher Attrition And The Recession

The Beginning Teacher Longitudinal Study (BTLS), a terrific project by the National Center for Education Statistics, tracks a nationally representative cohort of beginning teachers (those who started in 2007 or 2008) through their first five years and documents their turnover outcomes. Results from this survey have been trickling out every year (see our post here), but the most recent report presents outcomes from these teachers’ first four years.

The headline story, as reported in the Washington Post, was that roughly 17 percent of these new teachers had left the profession entirely within their first four years. A number of commenters, including the Post article, hastened to point out that the BTLS estimates are far lower than the “conventional wisdom” statistic that 40-50 percent leave the profession within the first five years (see here for more on this figure; also see Perda 2013 for a similar five-year estimate using longitudinal data). These findings are released within a political context where teacher attrition (somewhat strangely) has become a contentious political issue, one which advocates tend to interpret in a manner that supports their pre-existing beliefs about education policy.

Putting this source of contention aside, the BTLS results clearly show that new teacher attrition during these years was far lower than is often assumed, and certainly that teachers are not fleeing the classroom at a greater clip than in previous years. This is important, and cannot be "explained away" by any one factor, but we should still be careful about generalizing too strongly these findings beyond this particular time period, given that the BTLS cohort of teachers entered the classroom almost precisely at the time that the "great recession" began. This is, of course, not a new or original point – it was, for instance, mentioned briefly in the Post article. And it's hardly groundbreaking to note that labor market behavior does not occur in a vacuum. Still, given all the commentary about the BTLS results, it may be worth reviewing briefly.

The recession certainly had an impact on teacher attrition and mobility during this time, both in terms of which and how many teachers were hired, as well as their labor market decisions after they were hired. The question concerns the magnitude of this impact.

We can really only speculate what would have happened, but we might take a quick, albeit somewhat crude look at the Teacher Follow-Up Survey (TFS), which is also an NCES project. Every four years, the TFS checks the mobility outcomes among a representative sample of U.S. teachers. We can use it to check the attrition rate trend for teachers who had 1-3 years of experience in each wave. 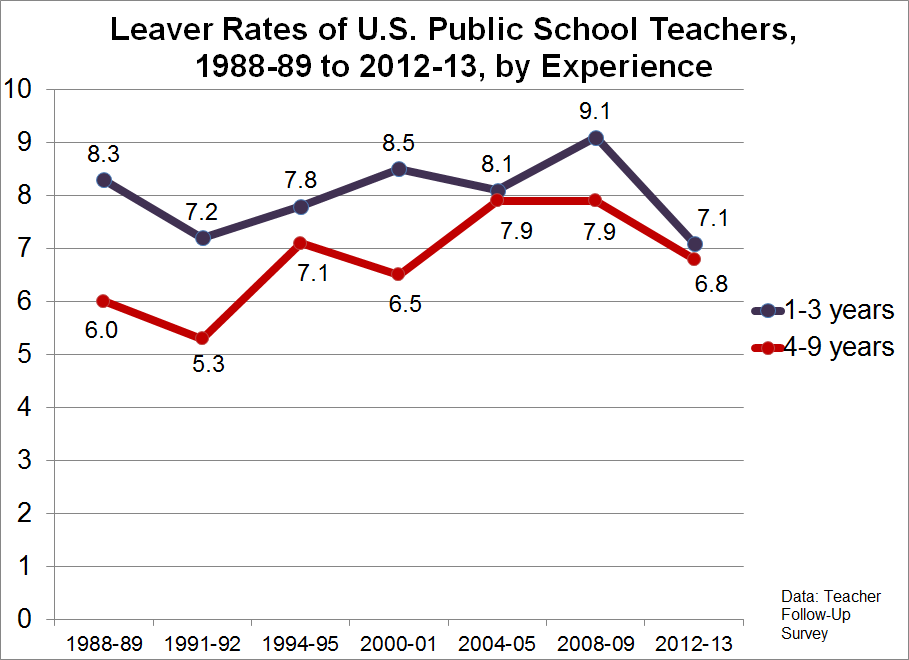 Because the TFS is conducted every four years, we cannot monitor the year-by-year attrition rates among less experienced teachers in each individual year of the recession (at least not at the national level). That said, the leaver rate for teachers with 1-3 years is actually higher in 2008-09 (9.1) than in 2004-05 (8.1), which does not support, but does not necessarily preclude (since the last available estimate is 2004-05), the argument that attrition among relatively inexperienced teachers declined in the first year of the recession.

There is, however, a somewhat pronounced drop in the leaver rate between 2008-09 and 2012-13, both among teachers with 1-3 and 4-9 years of experience. Only a portion of this change seems attributable to layoffs or other involuntary separations. One might therefore speculate (and it really is just speculation) that observed BTLS attrition rates might have been higher in better economic times, though there is no indication that they would have approached the 40 percent level.

(Important side note: Regarding the "40-50 percent" estimate, I should mention that I recently found out that it included both public and private school teachers, a fact I had failed to notice and point out in my posts on this topic. Private school teachers, while a minority, exhibit annual attrition rates that are roughly twice as high as those of their public school counterparts, and their inclusion would have a meaningful impact on the estimate. It's important to keep that in mind when comparing it with the BTLS results, which include only public school teachers.)

It also bears reminding ourselves that teacher turnover, like many educational outcomes, varies quite widely within and between districts. For example, among New York City teachers who started teaching in 2007-08, 35 percent left the district within their first four years (though a bunch of these teachers probably remained in the profession, but changed districts).This rate was roughly 45 percent for teachers who started just five years earlier, again suggesting the possibility of a “recession effect.”

Finally, we might take a quick look at the job mobility among all U.S. workers. The graph below uses data from the Bureau of Labor Statistics, and presents monthly quit rates and total separation rates (which include layoffs) between 2005 and 2015. Note, of course, that these figures include all workers, regardless of age, experience, or occupation. 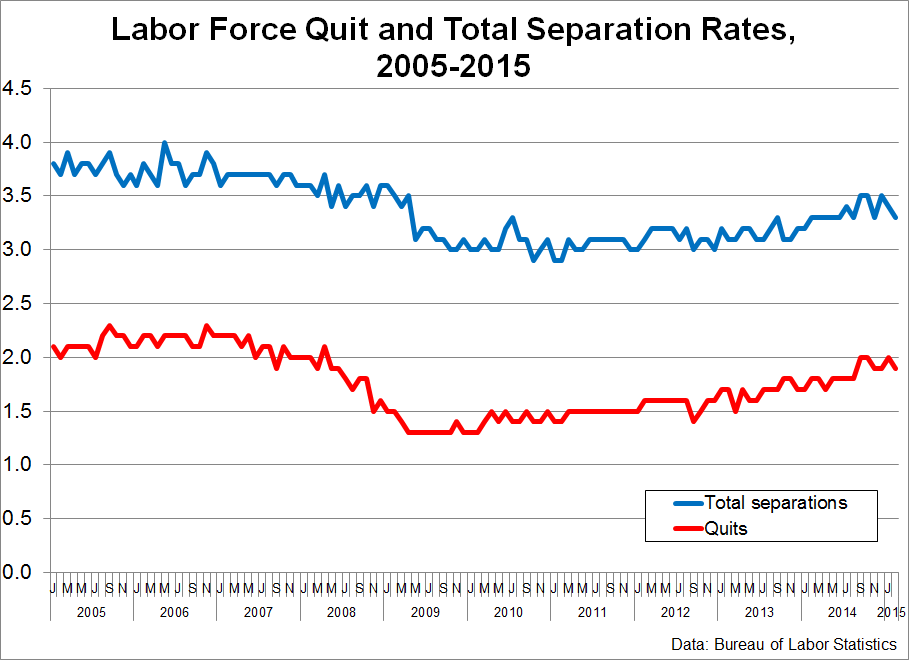 There is a fairly pronounced drop in the separation and especially the quit rate between early 2008 and late 2009. The rates stay relatively flat for a while after that, until they start to rise again at the beginning of 2013. This, particularly the quit rate trend, suggests that workers as a whole were more hesitant to change jobs (or stop working).

None of this is at all surprising. Whether we’re talking about teachers or incumbents of other occupations, labor market and economic conditions influence the tendency to leave one’s job voluntarily. And the Great Recession was no exception (Hyatt and McEntarfer 2012). Furthermore, even if attrition among new teachers was lower than it would have been under different circumstances, that does not speak to key questions about which teachers were leaving/staying, and why.

It is unfortunate that the BTLS was conducted during a time period that, economically, has been the furthest thing from “normal” that the U.S. has seen in generations. The good news is that NCES, to my knowledge, is considering surveying a second cohort of beginning teachers, starting in 2015-16. In the meantime, there is compelling evidence that new teacher attrition has been decreasing in recent years, and it seems likely that it is not as high as generally believed. Nevertheless, any attempt to generalize the current situation from the BTLS findings requires caution.