In a previous post, we discussed some recent data on contingent work or alternative employment relationships – those that are different from standard full time jobs, including temporary help, day labor, independent contracting, and part time jobs. The prevalence of and trends in contingent work vary widely depending on which types of arrangements one includes in the definition, but most of them are characterized by less security (and inferior wages and benefits) relative to “traditional” full time employment.

The rise of contingent work is often presented as a sign of deteriorating conditions for workers (see the post mentioned above for more discussion of this claim). Needless to say, however, unemployment insecurity characterizes many jobs with "traditional" arrangements -- sometimes called precarious work -- which of course implies that contingent work is an incomplete conceptualization of the lack of stability that is its core feature.

One interesting way to examine job security is in terms of workers’ views of their own employment situations. In other words, how many workers perceive their jobs as insecure, and how has this changed over time? Perceived job security not only serves as a highly incomplete and imperfect indicator of “real” job security, but it also affects several meaningful non-employment outcomes related to well being, including health (e.g., Burgard et al. 2009). We might take a very quick look at perceived job security using data from the General Social Survey (GSS) between 1977 and 2014.

Since part time jobs are usually understood to be temporary, the data presented below are full time, employed workers between 18-65 years of age. The first graph, directly below, simply presents the trend in the distribution of responses to the question of how likely it is the respondent will lose his or her job over the next 12 months. Note that the GSS is not administered annually, and so I have imputed values for years in which there is no data (GSS years are the ones with dots on the four lines). 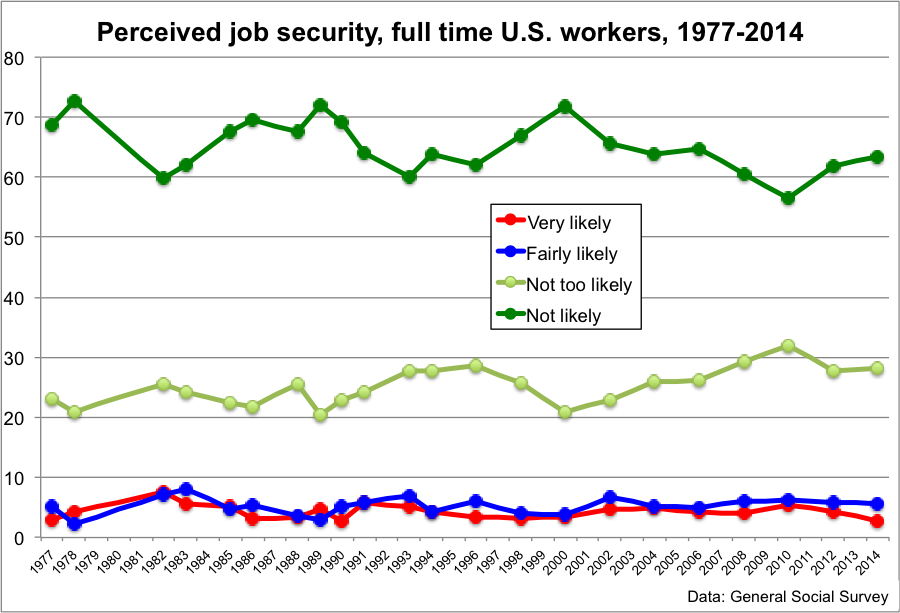 In any given year, about 5-15 percent of U.S. workers assert that it is either very likely or fairly likely they will lose their jobs within the next year. Another 20-30 percent think it is unlikely but possible (not too likely). Finally, 60-70 of respondents in any given year perceive little or no chance of job loss.

These distributions do flucutuate somewhat over the time period of 1977-2014. The percentage of respondents who believe it’s “not likely” they will experience job loss ranges from a high of 73 percent in 1978 to a low of 56 percent in 2010. The latter figure, of course, shows that, in the middle of the Great Recession, only about half of full time U.S. workers saw their jobs as highly secure, which in turn illustrates that perceptions of job security are sensitive to labor market conditions. (The trends are also susceptible to other factors, such as changes in the composition of the workforce, not to mention, of course, actual job security.)

It remains to be seen whether perceived job security has continued to increase beyond 2014.

The second graph, below, presents the percentage of respondents who are job insecure (i.e., reply either “very likely” or “fairly likely” to the question) along with the national unemployment rate over this time period (the unemployment rate includes all workers). Note that the scale of the y-axis in this second graph is different from that in the first. 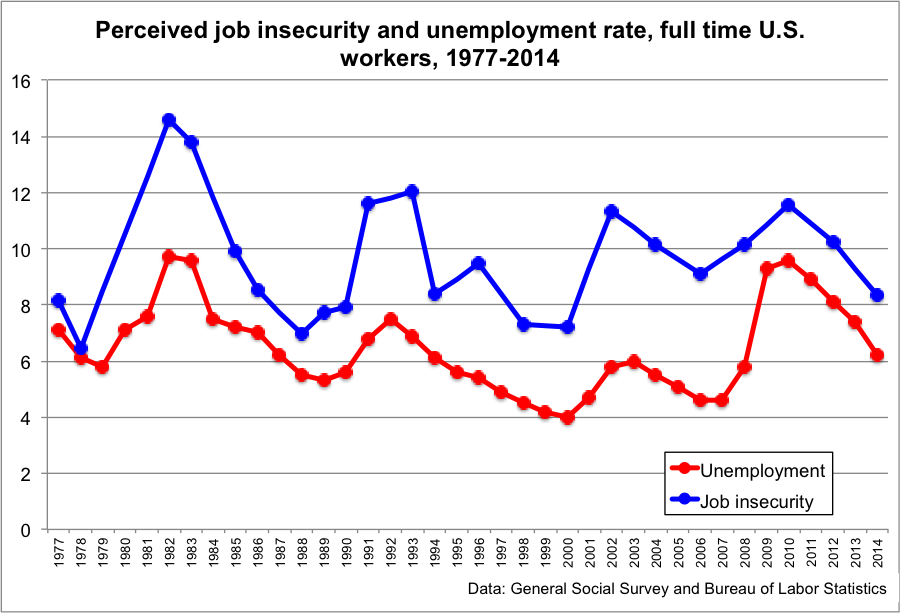 There is a clear relationship here, suggesting, unsurprisingly, that workers respond to labor market conditions when assessing their own employment situations. Note, once again, the remarkable spike in insecurity between 2007 and 2009, during which time the "insecurity rate" almost doubles.

So, are full time U.S. workers feeling less secure in their jobs than they did in the past? When controlling for labor market conditions (e.g., unemployment), as well as worker characteristics (e.g., sex, education, age, etc.), there is evidence suggesting that yes, U.S. workers generally perceive their jobs as less secure in recent years than in the past (Fullerton and Wallace 2007; Kalleberg 2013).

To the (uncertain) degree perceived insecurity trends reflect “real” trends, some observers and researchers may view this as a positive development, one indicative of greater labor market flexibility, which allows a tighter matching of workers with certain skills into jobs that require those skills. Others, however, see it in terms of the erosion of employment stability and the “traditional” employment relationship in the U.S., one that is giving rise to a increasingly precarious workforce characterized by unstable jobs and, thus, uncertain futures.