A Quick Look At U.S. Voter Turnout In International Perspective

At quick glance, voter turnout in the United States seems quite low. Over the past 30 years, the turnout rate among eligible voters has fluctuated between 50 and 60 percent, whereas barely two in five eligible voters turn out in midterm elections. And this is not getting better. Turnout in the 2014 election was just under 36 percent, the lowest since the Second World War (these national percentages, of course, vary considerably between states).

It is important, however, to put these figures in context, and one way to do that is to compare U.S. turnout with that in other nations. The Pew Research Center compiled data from recent elections in 34 OECD nations, and the graph below presents those data. The election to which the data apply is noted in parentheses. There are two rates for each nation: One is turnout as a percentage of the voting age population; and the other as a percentage of registered voters (i.e., the proportion of people registered to vote who actually cast a ballot).

The first major takeaway from the graph is that turnout among those old enough to vote is relatively low in the U.S. Of course, the sorting in the graph may obscure the fact that several countries, including Spain and the U.K., are ranked considerably higher than the U.S. but the actual differences in rates aren’t massive (and the U.S. would have ranked much higher in 2008, or if turnout was expressed as a share of the voting eligible population, which, due mostly to felon disenfranchisement and non-citizen residents, is a few percentage points higher). Nevertheless, U.S. electoral participation doesn't look too good vis-a-vis these nations. 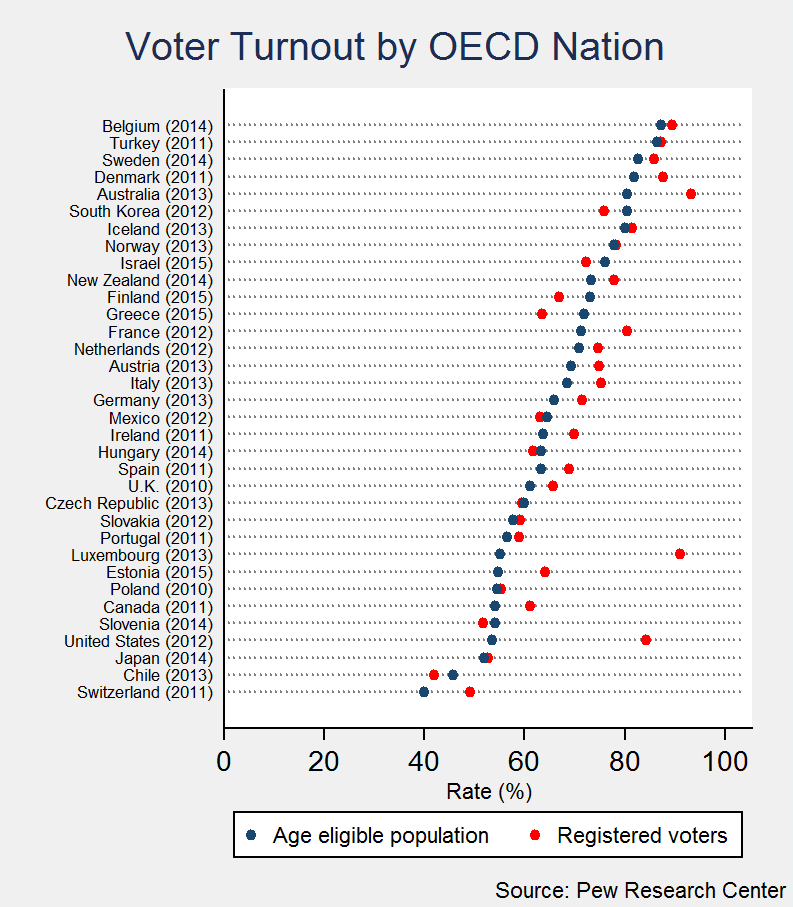 The other thing in the graph that catches one’s eye is the gap between the percent of voting-age and registered voter participation in the U.S.

While roughly 55 percent of voting age Americans cast a ballot in 2014, around 85 percent of those registered showed up, among the highest percentages in the OECD. The reason for this gap is fairly simple: Voter registration rates in U.S. presidential elections are around 65 percent, considerably lower than in most of these other nations. Elsewhere in the world, registration is either automatic or unregistered individuals are sought out aggressively (Rosenberg and Chen 2009). In the U.S., in contrast, it is on everyone to register themselves. This suggests that registration may represent an additional burden for at least some would-be voters in the U.S.

In any case, much of the recent discussion about voter turnout in the U.S., including some of our writing here, has focused on recent changes to state voting laws, particularly those making voting more difficult. For instance, since the 2010 election, ten states have passed laws requiring identification for voting, while eight states scaled back on early voting opportunities. Several other states implemented other changes, such as curbing voter registration drives, eliminating same day registration, and making it harder for convicted felons to vote again.

The actual magnitude of the impact of these laws remains to be seen (and is unlikely to be as large as some suggest; see this GAO report for a review of the evidence). But there is little doubt that they will disproportionately affect the poor, minorities, and young people, groups that tend to vote in lower numbers, but are also more likely to vote Democratic if they do show up.

The reasons why people do or do not register/vote are complicated and difficult to examine empirically (for example, most surveys rely on self-reported voting behavior, which is notoriously unreliable). Even if registration were automatic and voting were as easy as possible, it’s unclear how much turnout would increase (for example, even in nations where voting is mandatory, and non-compliance results in a fine, participation doesn’t crack the 90 percent barrier).

Still, given the current situation, the U.S. should be making it easier to vote. The fact that so many states are moving in the opposite direction is incomprehensible.