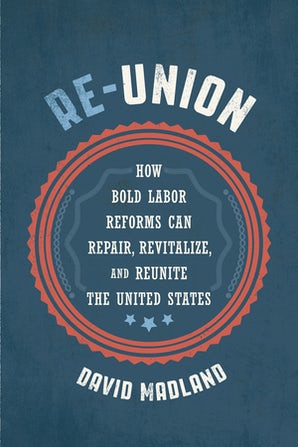 About the Book and Discussion

As the debate about the future of unions takes on increased urgency, a growing number of scholars, labor leaders and elected officials believe that sectoral bargaining is a key part of the revival of US labor movement. Yet many remain skeptical, concerned about the risks and practicalities of such a change. In Re-Union, Madland argues that a new labor system based on enhanced rights for workers, incentives for union membership, and greater sectoral bargaining to complement worksite-level bargaining is critical to revitalizing labor and addressing America’s core economic and political challenges. He highlights the importance of sectoral bargaining in raising wages, reducing economic inequality, and closing gender and racial pay gaps and draws on examples from US history and US states as well as countries around the world, particularly Britain, Canada, and Australia, to show how the new labor system could work in today’s economy.

Re-Union has been described as “this moment's necessary book” and offers a compelling plan that builds on the traditional role of unions while also proposing innovative steps forward.

David Madland is a senior fellow at the Center for American Progress. He has been called “one of the nation’s wisest young scholars” by Washington Post columnist E.J. Dionne Jr. Madland is the author of Re-Union: How Bold Labor Reforms Can Repair, Revitalize, and Reunite the United States (Cornell University Press, 2021) and Hollowed Out: Why the Economy Doesn’t Work Without a Strong Middle Class (University of California Press, 2015). He has appeared frequently on television shows, including “PBS NewsHour” and CNN’s “Crossfire”; been cited in such publications as The New York Times, The Wall Street Journal, The Washington Post, and The New Yorker; and been a guest on dozens of radio talk shows across the United States. He has testified before Congress on a number of occasions, as well as several state legislatures.

Larry Cohen served as president of the 600,000 member Communications Workers of America from 2005-2015, and spent nearly all of his adult life as a member, organizer, and officer of the union. Larry was also the founding chair of Jobs with Justice, an organization that brings labor, community, student, and faith voices together at the national and local levels to win improvements in people’s lives and shape the public discourse on workers’ rights and the economy. Cohen was the founding chair of the Democracy Initiative, a coalition of more than 50 membership organizations working together on securing voting rights and removing big money from politics. He is a member of the Democratic National Committee, and was appointed by Senator Bernie Sanders as vice-chair of the Unity Reform Commission. On August 25, 2018, DNC members approved major reform proposals related to the 2020 presidential nominating process and national and state party transparency and democracy. Larry currently chairs the board of Our Revolution, the successor organization to Bernie 2016.

Lynn Rhinehart is a senior fellow at EPI, where she works on labor and employment policy, with a focus on collective bargaining. Rhinehart was general counsel of the AFL-CIO from 2009 until July 2018. She joined the legal staff at the AFL-CIO as an associate general counsel in 1996. While at the AFL-CIO, she was the executive director of the Lawyers Coordinating Committee (LCC), a national organization of 2,000 union-side labor lawyers in law firms and legal departments. Prior to joining the AFL-CIO, Rhinehart clerked for the Honorable Joyce Hens Green of the United States District Court for the District of Columbia and served on the staff of the U.S. Senate Subcommittee on Labor.

César F. Rosado Marzán is a Professor at University of Iowa College of Law. Prior to coming to Iowa Law he taught at IIT Chicago-Kent College of Law, where he also was Co-director of the Institute for Law of the Workplace. Before becoming a professor, he worked in New York City law firms representing labor unions and employees. Prof. Rosado Marzán has also been a visiting faculty member or scholar at Iowa College of Law, the Universidad Autónoma de Madrid School of Law, Stockholm University's Law Department, the American Bar Foundation, and the Oñati Institute for the Sociology of Law.

To order a copy of RE-UNION: How Bold Labor Reforms Can Repair, Revitalize, and Reunite the United States please go HERE and use the promotional coupon code 09FLYER to get a 30% discount.