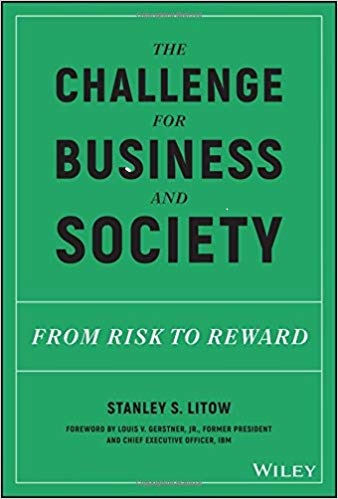 THE CHALLENGE FOR BUSINESS AND SOCIETY: FROM RISK TO REWARD

The 2016 U.S. Presidential Campaign focused a good deal of attention on the role of corporations in society, from both sides of the aisle. In the lead up to the election, big companies were accused of profiteering, plundering the environment, and ignoring (even exacerbating) societal ills ranging from illiteracy and discrimination to obesity and opioid addiction. Income inequality was laid squarely at the feet of us companies. The Trump administration then moved swiftly to scrap fiscal, social, and environmental rules that purportedly hobble business, to redirect or shut down cabinet offices historically protecting the public good, and to roll back clean power, consumer protection, living wage, healthy eating initiatives and even basic public funding for public schools. To many eyes, and the lens of history, this may usher in a new era of cowboy capitalism with big companies, unfettered by regulation and encouraged by the presidential bully pulpit, free to go about the business of making money—no matter the consequences to consumers and the commonwealth. While this may please some companies in the short term, the long term consequences might result in just the opposite.

And while the new administration promises to reduce "foreign aid" and the social safety net, Stanley S. Litow believes big companies will be motivated to step up their efforts to create jobs, reduce poverty, improve education and health, and address climate change issues — both domestically and around the world. For some leaders in the private sector this is not a matter of public relations or charity. It is integral to their corporate strategy—resulting in creating new markets, reducing risks, attracting and retaining top talent, and generating growth and realizing opportunities. Through case studies (many of which the author spearheaded at IBM), The Challenge for Business and Society provides clear guidance for companies to build their own corporate sustainability and social responsibility plans combining commitment to the bottom line with dedication to the common good.

Stanley S. Litow, an adjunct professor of international and public affairs at Columbia University, is the former vice president of corporate community relations at IBM. He was also president of the IBM International Foundation, which has been called “one of the nation’s largest corporate philanthropic programs” extending to more than 100 countries abroad. In 1996 and 1999, he assisted IBM’s CEO, Louis V. Gerstner, in planning and overseeing the two national educational summits that were hosted by IBM. Prior to joining IBM, Litow served as deputy chancellor for operations and chief operating officer of New York City’s public schools; president of Interface, a not-for-profit think tank; and a governor-appointed member of New York state’s Industrial Cooperation Council, its Job Training Partnership Council and the state’s School and Business Alliance.