A Wolf at the Schoolhouse Door Book Discussion 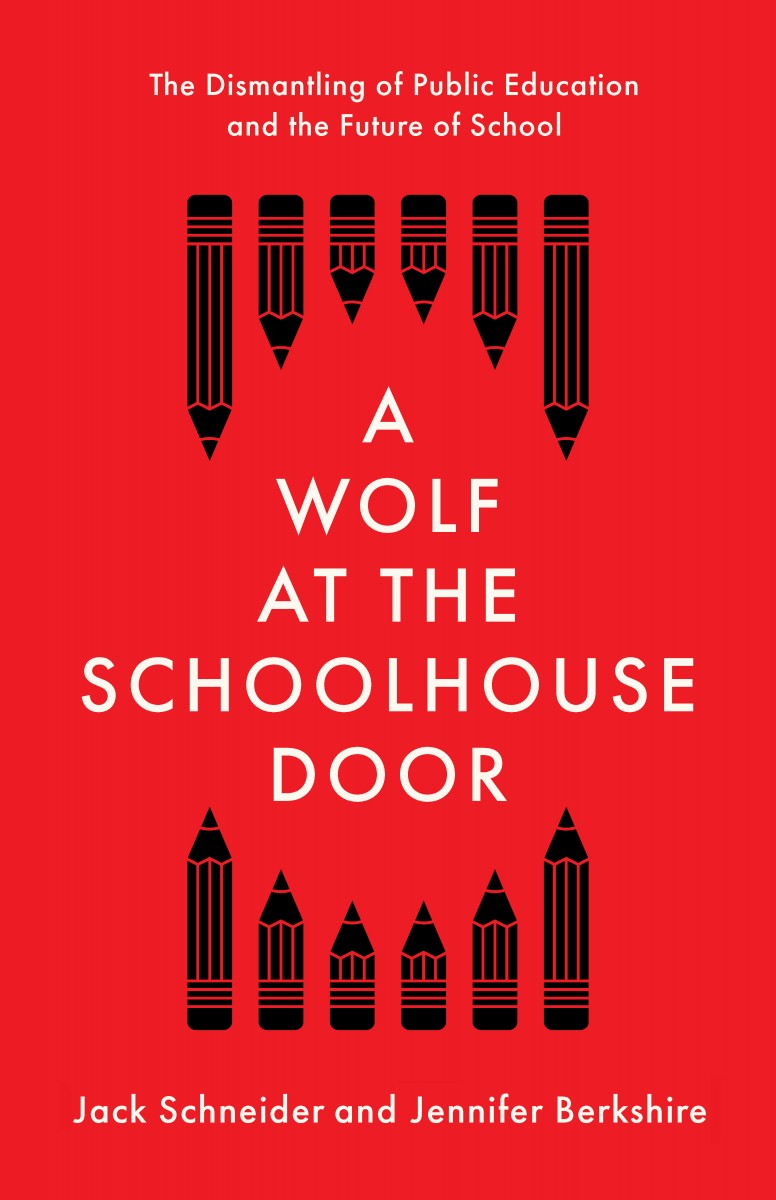 A conversation with Jack Schneider and Jennifer Berkshire, authors of A Wolf at the Schoolhouse Door, and discussant Andy Smarick.

If America’s public schools don’t survive the COVID-19 pandemic, it won’t just be due to the virus. Opponents of public education have long sought to dismantle our system of free, universal, and taxpayer-funded schooling. But the present crisis has provided them with their best opportunity ever to realize that aim.

Books like Jane Mayer’s Dark Money and Nancy MacLean’s Democracy in Chains sounded a clear warning about the influence that right-wing plutocrats increasingly exert over American politics. Now, A Wolf at the Schoolhouse Door takes their analyses a step further, addressing an urgent question: Why is the right so fixated on dismantling public education in the United States?

A Wolf at the Schoolhouse Door

A Wolf at the Schoolhouse Door

Education historian Jack Schneider and journalist Jennifer Berkshire, co-hosts of the popular education podcast Have You Heard, trace the war on public education to its origins, offering the deep backstory necessary to understand the threat presently posed to America’s schools.

The book also looks forward to imagine how current policy efforts will reshape the educational landscape and remake America’s future. A Wolf at the Schoolhouse Door offers readers a lively, accessible, yet scholarly view of a decades-long conservative cause: unmaking the system that serves over 90% of students in the U.S.

Jack Schneider is an Assistant Professor of Education at the University of Massachusetts Lowell, where he leads the Beyond Test Scores Project. An award-winning scholar, his work broadly explores the influence of history, culture, and rhetoric in education policy. The author of four books, Dr. Schneider writes frequently about education in outlets like the Atlantic, the New York Times, and the Washington Post. He is the co-founder of the Massachusetts Consortium for Innovative Education Assessment, co-host of the education policy podcast “Have You Heard,” and co-editor of History of Education Quarterly. He lives in Somerville, Massachusetts, where his daughter is enrolled in the public schools.

Jennifer Berkshire writes about education and politics for the Nation, the New Republic, the Baffler, the New York Times, and other publications. The creator and co-host of the education policy podcast “Have You Heard,” she teaches aspiring podcasters in the journalism program at Boston College and the Labor Studies program at UMass Amherst. Berkshire discovered her passion for storytelling while covering a series of bitter labor battles that wracked her native Midwest in the early 1990’s. She is the author of More Worlds to Negotiate: John Dunlop and the Art of Problem Solving. A licensed public school teacher, Berkshire lives in Gloucester, Massachusetts.

Andy Smarick is a senior fellow at the Manhattan Institute, where his work focuses on education, civil society, and the principles of American conservatism. He was confirmed by the Maryland State Senate in March 2020 for a term on the Maryland Higher Education Commission. Previously, Smarick was a resident senior fellow and director of the program on civil society, education, and work at the R Street Institute, as well as the Morgridge Fellow at the American Enterprise Institute. He has also served as an aide in the White House Domestic Policy Counsel of President George W. Bush, president of the Maryland State Board of Education, a deputy assistant secretary at the U.S. Department of Education, the New Jersey deputy commissioner of education, and a legislative assistant at the U.S. House of Representatives.