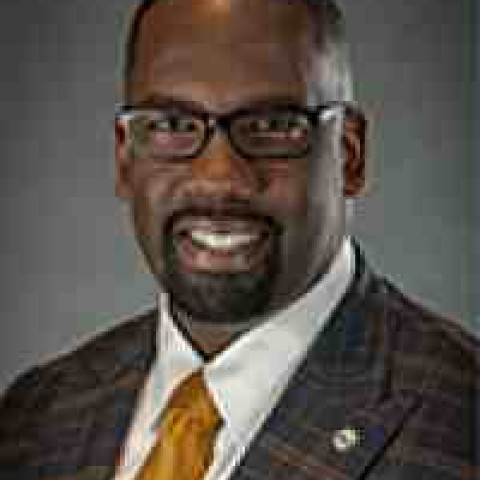 Fedrick grew up in inner-city Miami and attended public schools. Pursuing his love of music, he attended Bethune Cookman University on scholarship and became the first member of his family to earn a post-secondary degree, in music education.

He would go on to be a music teacher and band director in Miami-Dade public schools for 10 years. Fed is also an accomplished musician in his own right and has performed throughout the state and nationally as a commercial artist.

Along with his leadership team, Fedrick envisions a new era for the Florida Education Association, with members united to achieve their goals for public education.

“We are marching forward together as one union, ready to take on those who have used their power to drain our public schools not only of desperately needed funding, but of the joy of learning. We will be fearless as we stand against those who would harm public education, but we will also reach out across political lines to build bridges and enlist new allies as we work to improve learning conditions for our students and working conditions for educators,” Fedrick said.

“Nationally, our state ranks 44th in per-student revenue, 45th in teacher pay and 47th in pay for our education staff professionals. Higher education faculty and adjuncts continue to experience stagnant salaries, too many Floridians are struggling with student debt, and our schools are facing an unprecedented teacher shortage. It’s time for our state to do better for its citizens and our public schools. We must not continue to shortchange the future.”

Fedrick is in frequent demand as a speaker, lecturer and presenter, and is recognized nationally for his workshops and presentations specific to community organizing. He is also an elected vice-president of the American Federation of Teachers Executive Council, making decisions that guide 1.7 million AFT members nationwide.

In May 2013, the Miami Herald’s Legacy magazine named Fedrick as one of South Florida’s 50 most powerful black business leaders. He is also a recipient of the prestigious JM Family African-American Achievers Award, given to leaders who have exemplified excellence in their respective fields.

In addition to his bachelor’s degree from Bethune-Cookman, Fedrick earned a master’s degree in educational leadership from Barry University. He also holds an honorary doctorate of humane letters awarded by Florida Memorial University.

He is married to Yvetta Ingram, and they have three children, all of whom have attended public schools.