All The World’s A Stage: How Churn Undermines Change

Our guest authors today are Kara S. Finnigan, Associate Professor at the Warner School of Education at the University of Rochester, and Alan J. Daly, Professor and Chair of Education Studies at the University of California San Diego. Finnigan and Daly recently co-edited Using Research Evidence in Education: From the Schoolhouse Door to Capitol Hill (Springer, 2014), which explores the use and diffusion of different types of evidence across levels of the educational system.

“All the world’s a stage, and all the men and women merely players; they have their exits and their entrances." William Shakespeare – As You Like It

All too often in districts under intense accountability pressures, exits and entrances happen frequently and repeatedly. One might conceptualize the work of district reform as a play in which actors are beginning to learn their lines and block places on the stage but, just as the play is underway, some key actors leave and others join, causing disruption to the performance. Now, if all of those who leave or join have smaller roles, the disruption may be less extreme, but if most are lead actors or the director or even the head of costume design, you’d likely have to push back opening night.

Now in the theater there are often “understudies," but in education, given the specialization in roles and reduced resources, rarely are individuals ready to step in should the lead actor or actors leave. Obviously this simple scenario doesn’t quite capture the complexity of churn we see in districts, but it shows how educators, like actors, must rely on each other to achieve results. Merely writing better lines or having a new theater does not account for the critical role of practitioners and their interdependencies and yet, these relations receive scant attention in education reform.

We know that complex change requires trusting partnerships, strong leadership, and collaborative relationships, and yet we see policies and practices that often run counter to what empirical study suggests. Policies have been implemented all too often without a strong understanding of the internal and relational struggles facing urban systems, particularly those experiencing high levels of churn.

“Churn” is often associated with individuals leaving an organization, but that is only half of the story, because systems churn when new individuals enter as well. Social interactions, institutional memory, and the flow of knowledge and information can be significantly disrupted when a high percentage of actors leave and enter the system. Put a different way, there are significant “costs” to a school district associated with the exit and entry of educators through a loss of training and development costs, often referred to as “human capital”.  There is also, however, an added cost in terms of knowledge, social support, and organizational memory, which we argue is just as detrimental and, perhaps, harder to repair, since the nature of those interactions is informal and, therefore, not codified.  As such, constant churn can impose significant fiscal, human and social capital costs on a school district.

But how do we gauge this other type of cost? To make the social cost explicit, we use social network data and examine the underlying relationships of schools and central office leaders.  While many people focus on the churn of teachers in urban systems, in this case we focus on the churn of leaders in the district – both at the school and central office level – because leaders are critical to large-scale, complex change.  Here we share part of our analysis and our social network maps to show the gravity of the situation in low-performing districts.  The first picture (below) shows all of the school leaders in the district in the outer clusters and central office leaders in the district are shown in the center group.  The yellow nodes represent those who joined or left during a 3-year period while this district was under accountability policy sanctions.  This map shows that more than 30 percent of leaders shifted in and out of this district. Imagine the implications of this: A third of the top leaders and principals rotating through a system. The disruption and ability to cohere around a reform would be dramatic. 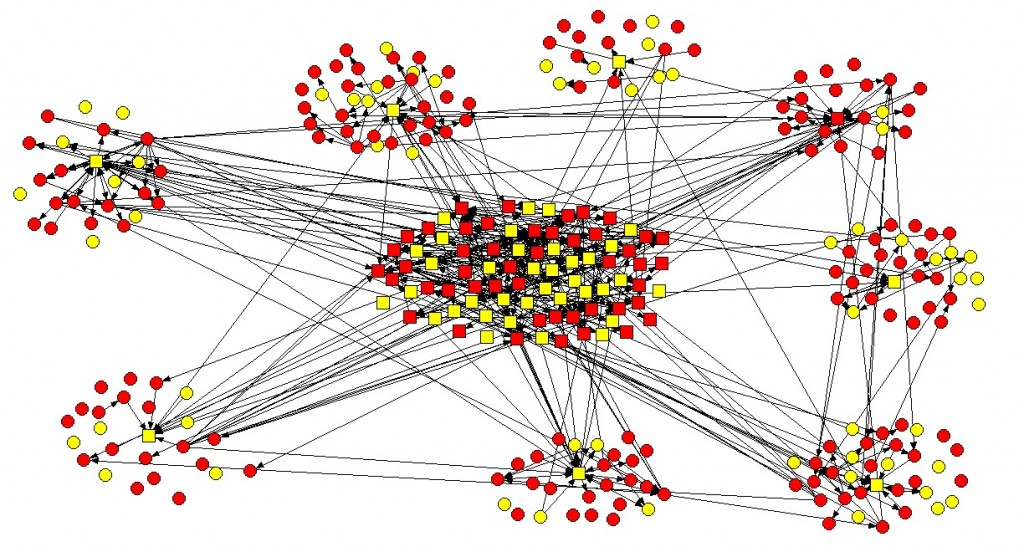 Beyond this overall churn, it is important to consider who the “connectors," or brokers, are in the system, because these people play an important role in the movement of ideas and practices across the district -- even if they don't have a formal leadership role or title.  In this next map we show these same data displayed a little differently – here the bigger nodes are the “brokers” in the system – people who connect otherwise disconnected people - and the blue colored nodes are the ones who left.  What this map illustrates is that many key people, the system connectors (shown by the larger nodes in the picture), left the district, causing fragmentation to the underlying relationships that exist.  In other words, when brokers leave the disruption is especially great – similar to the departure of the lead actors or the director in the theater scenario above. 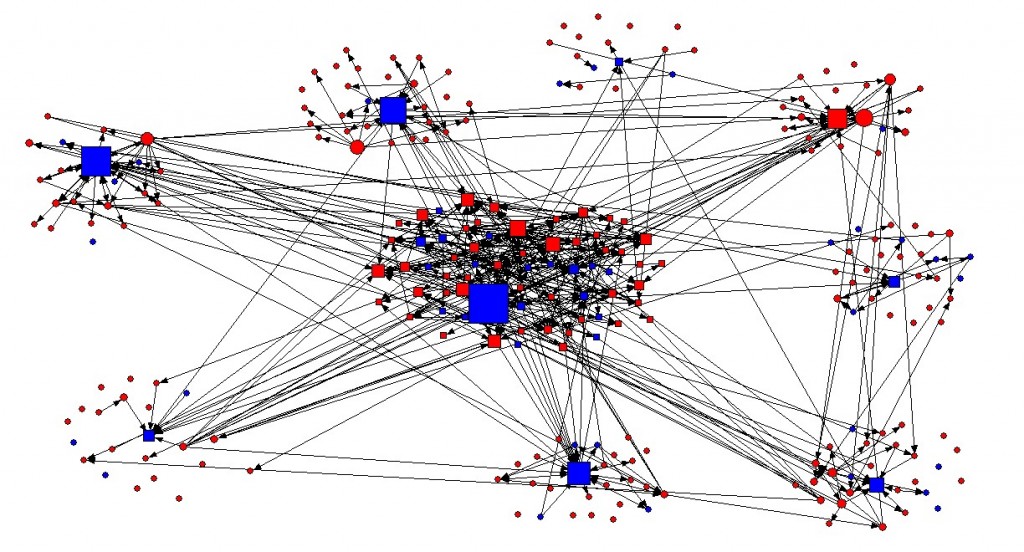 Although others have reported the human capital costs of churn, few discuss the social capital costs, which potentially are significant, as demonstrated by the analysis above. Churn creates an instability of relationships that undermines organizational learning and trust.  Think about what things would be like if every time you turn around there is someone new with whom to work or from whom you take direction. Our research suggests that some policy instruments are particularly detrimental.

First, high-stakes accountability policies have increased levels of stress in these challenging urban systems, and as stakes have increased, the already high amount of movement in and out of the leadership team (including principals and central office administrators) has also increased. Second, “turnaround” policies have directly added to network churn through the replacement of principals in schools under sanction. This creates a type of vicious cycle in which districts work to improve and develop a consistent reform approach across the system, while at the same time operating under policies that create the conditions for leaders to leave, which inhibits improvement and coherence, thus causing more policies that likely increase departure, and so on.

There is, however, some promising news in our work. It appears that strengthening the quality of relationships between leaders, as well as building leadership capacity, can enhance the trust available to do the difficult and often times dangerous (at least in terms of staying employed) work of district improvement. But we rarely see policies that place the quantity and quality of relationships at the forefront of reform. Instead, the continued (though perhaps recently shifting) emphasis of educational policies in the U.S. is on the necessary, but not sufficient technical fixes in our educational system.  Capacity building is not an easy policy solution, but it has a much better chance of strengthening (rather than destroying) these urban systems that bear the brunt of our broader educational inequities.

This post is part of a series on “The Social Side Of Reform," exploring the idea that relationships, social capital, and social networks matter in lasting, systemic educational improvement. For more on this series, click here.