As you may know, Congressional Republicans have stalled legislation to reauthorize the operation of Federal Aviation Administration, partially closing down the agency since July 25 at the cost to the U.S. government of $30 million a day in lost tax revenue. This state of affairs will continue at least until Congress resumes in September. What you may not know is that the source of the dispute is whether airline and railroad workers in the  private sector should have the right to organize unions by winning a simple majority of votes (the way elections are conducted in every other public- and private-sector union election). Republicans are against this, and are instead insisting that unionization should require a majority of all possible votes within the unit, irrespective of turnout.

For me, at least, this was objectionable in and of itself, but it's always a little odd to hear the rhetoric used by some Republicans in these types of situations, specifically when they are reported to see themselves fighting off an advance by "big labor" in the private sector.

Big labor. The pejorative is beginning to carry the ring of someone living in a time warp. What do I mean?

Most people know that union membership in the U.S. has declined over the past few decades, but it seems that many aren’t aware of the extent and breakdown of this trend. So here are the basic data on union membership over time. 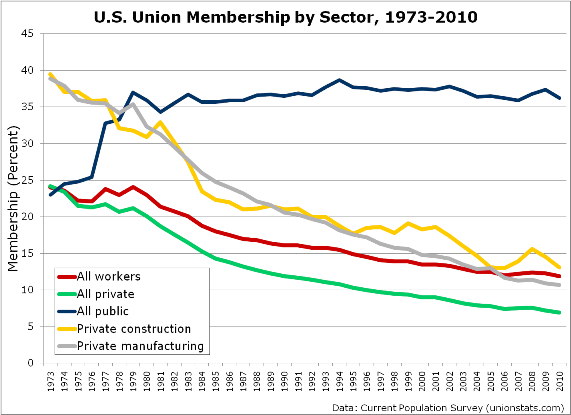 The public sector, in contrast, has managed to maintain its union density at roughly 36-37 percent, following a sharp increase during the mid- to late-1970s.  But the public sector is of course far smaller than the private sector, which means that the stability of the former did not do much to stem the overall decline in union membership. And given the recent push to eliminate collective bargaining in the public sector and make it more difficult for unions to maintain their memberships, we might expect some decline in public sector membership over the next few years as well.

Today, just over one in ten workers belongs to a union, about half the rate of 30 years ago, and among the lowest of all OECD nations. In the private sector, the focus of the FAA dispute, it’s more like one in twenty, a 70 percent decline since 1973.

Yes, even 5-10 percent of the labor force represents a large number of workers, but in the private sector, one thing is clear: Whatever Congressional Republicans may claim in the heat of battle, big labor may be big in spirit, but not so much anymore in terms of actual membership.