The Big Story About Gender Gaps In Test Scores

The OECD recently published a report about differences in test scores between boys and girls on the Programme for International Student Assessment (PISA), which is a test of 15 year olds conducted every three years in multiple subjects. The main summary finding is that, in most nations, girls are significantly less likely than boys to score below the “proficient” threshold in all three subjects (math, reading and science). The report also includes survey items and other outcomes.

First, it is interesting to me how discussions of these gender gaps differ from those about gaps between income or ethnicity groups. Specifically, when we talk about gender gaps, we interpret them properly – as gaps in measured performance between groups of students. Any discussion of gaps between groups defined in terms of income or ethnicity, on the other hand, are almost always framed in terms of school performance.

This is partially because schools in the U.S. are segregated by income and ethnicity, but not really by gender, and also because some folks have a tendency to overestimate the degree to which income- and ethnicity-based achievement gaps stem from systematic variation in schooling inputs, whereas in reality they are more a function of non-school factors (though, of course, schools matter, and differences in school quality reinforce the non-school-based impact). That said, returning to the findings of this report, I was slightly concerned with how, in some cases, they were reported in the media.

Specifically, as mentioned above, the “take home” summary of the PISA results was that girls “outperformed” boys on PISA – i.e., that a larger proportion of boys versus girls failed to score above the “proficient” threshold on all three PISA subjects (math, reading and science). This is, for one thing, not really the best way to express these data, as the conversion of scores into the “yes/no” outcome (above or below “proficiency”) really entails a lot of distortion (Ho 2008), though I acknowledge that the "pass rates" are more accessible (and, for the record, the actual score gaps are in the report as well).

More importantly, though, the “take home” really misses what is in my view an equally if not more interesting and important finding about gender gaps (which is, in fact, emphasized in the OECD report). That is, according to the 2012 PISA results, girls score much higher than boys in reading, while boys score higher than girls in math and science (in the case of the latter, only very slightly).

Now, granted, these results mask considerable variation by nation. But let’s take a look at math and reading gender gaps in the U.S., and use NAEP scores, since they are available for multiple grades/ages.

The table below provides a breakdown of NAEP score, by subject and gender, in 2013. Consistent with the international PISA results for 15 year olds, there is a very large gender gap in reading at all three NAEP grade levels, and the differences are quite large. 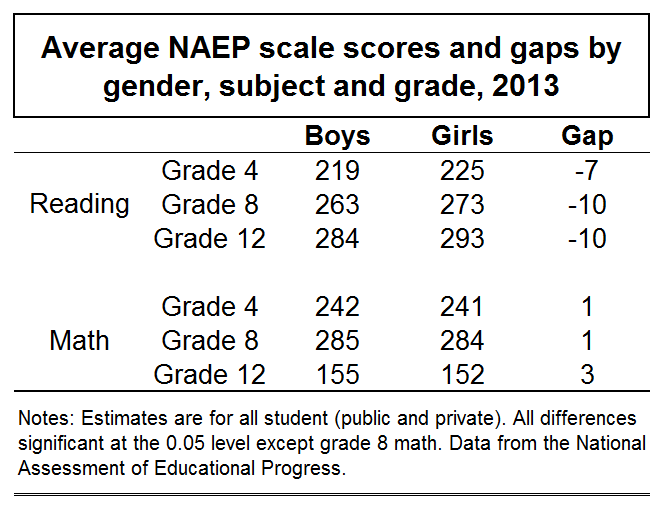 In contrast, the discrepancies in math scores, while statistically significant in all grades except eighth, are generally quite small in magnitude (i.e., the average score for boys is higher than that for girls, but not by much).

(Side note: The size of these gaps do not vary much by subsidized lunch eligibility, but they do vary somewhat more by ethnicity, particularly in math.*)

Remember that gaps only matter insofar as they reflect and/or influence important social or economic processes. That’s why we focus on discrepancies by characteristics such as ethnicity, income and gender, rather than eye color or height. And, when it comes to gender gaps, the stark discrepancies between subjects speaks quite directly to extremely consequential differences between boys and girls in terms of stereotypes, in the degree to which they are encouraged to pursue these subjects, whether at home or in school, and/or in their own motivation and confidence in learning and performing different types of tasks. And all of this, needless to say, carries implications for career choices, returns to education, and other post-K-12 outcomes (e.g., Correll 2001). (For more discussion of and a good summary of the research on these issues, see our posts here and here; also see the survey results presented in the OECD report referenced above.)

In this sense, any generalizations about gender testing gaps at a given point in time that do not include a focus on how and why these gaps vary by subject are, in my opinion, really missing a big point.

* For example, African-American girls score more highly than boys in math, whereas the opposite is true among white test takers. The differences, however, are not dramatic, and do not change the conclusions of this post.