Do Americans Think Unions Help Everyone?

The question in the headline is fundamental when trying to understand attitudes towards organized labor, as well as the relatively low union presence in the U.S. The "if I can't have it, nobody can" attitude that anti-labor advocates try to promote among non-members packs far less punch if people understand that many of the conditions they take for granted - trivial things like sick days, minimum wages, and yes, weekends - are in no small part thanks to past and current efforts of the U.S. labor movement. Awareness of these efforts, and of the positive union effect on everyone's wages and benefits, is also, no doubt, partially dependent on one's experience with unions (e.g., coming from a "union family").

So, it might be instructive to take a quick look at attitudes towards labor's effects in the U.S. compared with those in other nations, and whether this appears to be related to the degree of unionization. Basically - do Americans think unions help all workers, and how do our attitudes stack up against other nations?

Some data on this question come from the International Social Survey Programme 2005 "Work Orientation" module (the latest year available). The ISSP is a survey of attitudes and characteristics in about 35 nations, including the U.S.

The figure below presents a very simple weighted tabulation of responses to the following proposition: work conditions would be much worse without trade unions. This queries the union effect on all workers' conditions. It also permits these effects to be both historical and more contemporary. The percent of respondents in each nation who either agreed or strongly agreed with this proposition are combined into a total "agreement rate." 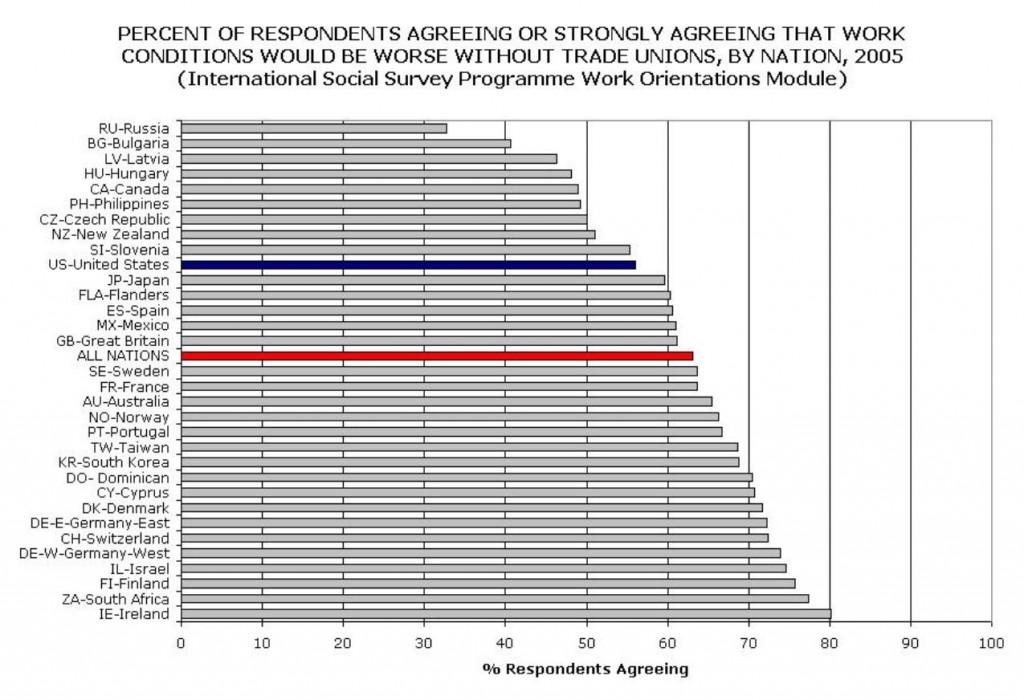 Overall, belief in the positive effects of unions is relatively high across most of these nations, and there are only five nations in which the agreement rate is below 50 percent (including super-outlier Russia at roughly 33 percent).

It is true that, among these 35 nations, the U.S. is slightly below average in terms of belief in trade unions' benefits. The average across all nations is roughly 63 percent, compared with about 56 percent in the U.S. Nevertheless, a majority of Americans believe that unions exert (or have exerted) a positive influence on working conditions, and our level of agreement, while below the mean, is rather comparable to other nations', including Great Britain, France and Sweden.

How does the U.S. compare in terms of disagreement with this statement? (Respondents can "neither agree nor disagree," so disagreement cannot be inferred from the agreement rates above.) Disagreement is presented in the figure below. 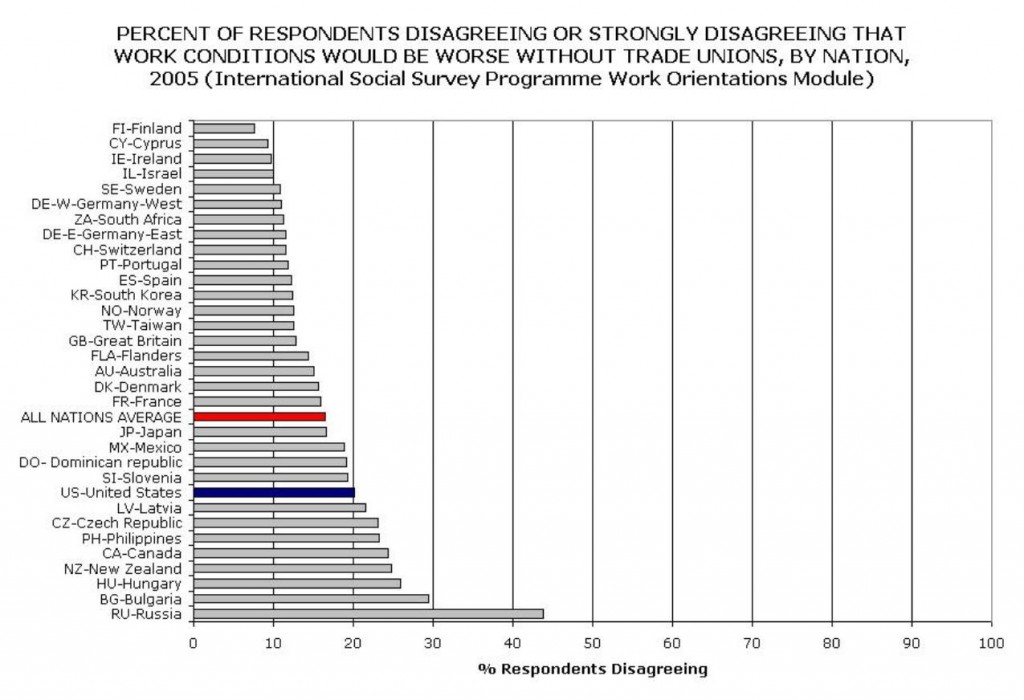 Though once again, disagreement in the U.S. (about 20 percent) is a bit higher than average (about 17 percent for all 35 nations), only a small minority of Americans - one in five - thinks that working conditions would not be worse without unions.

It is feasible that nations with higher union density will enjoy greater benefits of that unionization, as well as more awareness of those benefits. The scatterplot below combines the ISSP agreement rates above with data from the OECD Abstracts to depict union density by agreement (two quick notes: density figures are not available for all ISSP nations; and the y-axis starts at 40 percent to give a better spread). 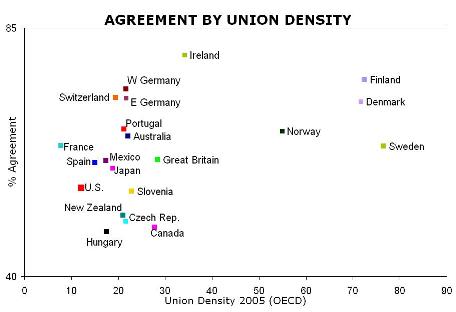 Among the OECD nations with high union density (Finland and Scandinavia), there is very high agreement that unions improve working conditions. In contrast, the rest of the nations (with between roughly 10 and 40 percent density) vary widely. There is almost universally high agreement among the western European nations, while Canada stands out as a nation with a particularly low agreement level relative to their union presence. Conversely, there are three OECD nations with relatively high agreement given their union densities: France, Spain, and the U.S.

Obviously, one cannot make causal arguments about the density-agreement relationship based on these simple data presentations (and the relationship is most likely bi-directional). But it seems that more often than not, Americans understand that unions improve (or have improved) working conditions for everyone, and this agreement level is actually particularly strong compared to that of the other nations examined above, given the relatively low union presence in the U.S. Of course, Americans may still fail to join unions for other reasons (as, for example, the Shanker Institute's late board member Seymour Martin Lipset pointed out with the idea of "American exceptionalism"), but we do tend to agree that they work, and we are not especially "exceptional" in this sense.