Although student segregation by race and ethnicity is well documented in U.S. public schools, the body of evidence on the related outcome of economic school segregation (e.g., by income) is considerably smaller (Reardon and Owens 2014).

In general, economic segregation of students is increasing nationally over the past few decades, both between districts and between schools (Owens et al. 2014). It is inevitable that these aggregate trends vary widely by state, metropolitan area, and district. We were curious as to the situation in New York City, the nation’s largest district, but were unable to find any NYC-specific results, particularly results that included different types of segregation measures.

We therefore decided to take a quick look ourselves, using data from the NYC Department of Education. The very brief analysis below uses eligibility for subsidized lunch (free and reduced-price lunch, or FRL) as a (very) rough income proxy, and segregation is measured between district schools only (charters are not included) from 2002 to 2015. In the graph below, we characterize within-district, between-school segregation using two different and very common approaches, exposure and dissimilarity.

Exposure tells you about how much contact students of a given group have with students of another group (in this case, FRL- eligible and non-eligible students). This measure is, of course, sensitive to the composition of students – if, for example, the proportion of FRL-eligible students increases over time, the exposure index is also likely to increase. The other indicator, dissimilarity, is not sensitive to composition, and it tells you how evenly (or unevenly) students of a given group are distributed across schools. For more discussion on interpreting these and other segregation measures, see our research brief. 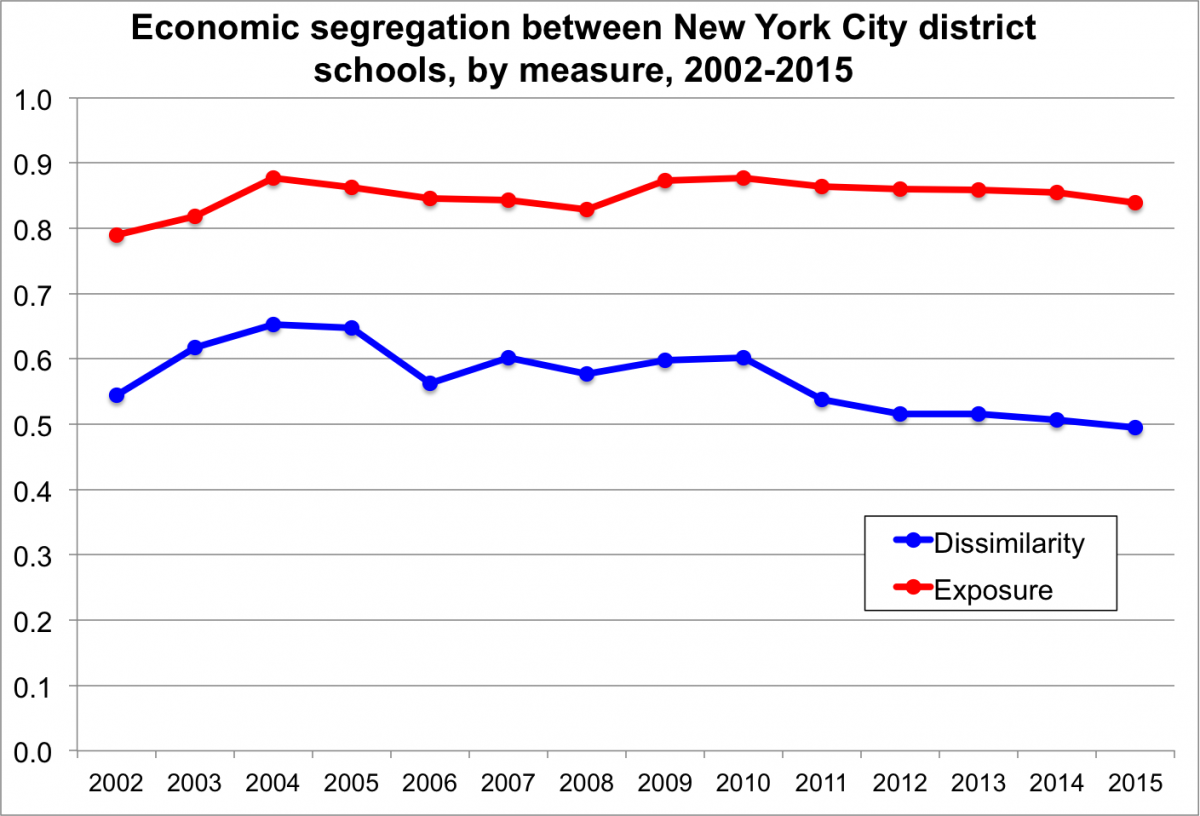 The trend line for the exposure index (the red line) hovers around the 80-90 percent range, which means that the typical non-eligible students attends a school in which 80-90 percent of his or her peers are FRL-eligible. This is a very high value, comparable to that measuring segregation between white and minority students. It is not, however, surprising, given that 75-80 percent of NYC students are FRL eligible.

Moving on to the trend, the exposure index increased a bit between 2002 and 2015, with most of that increase occurring around 2003-2005 and 2008-2010 (though, again, part of this increase is likely due to compositional changes, which is one reason why exposure is not the best indicator when looking at trends).

The results for the dissimilarity index are somewhat different. For most of the period between 2003 and 2010, the index is in the 60 percent (0.60) range, which is generally considered the rule of thumb threshold for very high segregation. In order to interpret these figures, consider that a dissimilarity value of 0.60 means that 60 percent of students would have to switch schools in order to achieve perfect integration (i.e., the situation in which the proportion of eligible and non-eligible students is the same in every school). The values in the graph above are considerably lower than those measuring segregation between black and white students (generally in the 0.75 range), but only slightly lower than dissimiliarity values for white and Hispanic students (around 0.65).

Starting in 2010, however, the index declines, reaching 50 percent by 2015. One might be tempted to attribute this decrease to the recession. This may be the case – for example, many families may have fallen below the eligibility threshold during this time, and they may have been relatively evenly distributed between schools.

In any case, the simple results presented above show that economic segregation (with income measured in terms of FRL eligibility) is quite high in NYC by any measure, though may have decreased slightly in recent years.

Thank you for this important

Thank you for this important look at increasing economic segregation in NYC schools. Your findings seem to fit with conventional wisdom that says the divide between the haves and have-nots is widening in the U.S. While I realize that you took this data from a current set and did not conduct new research, now that you have your findings, does your research team have any thoughts about how teachers and campus administrators are addressing economic segregation in NYC schools? What is happening pedagogically, with policy, and with programs offered to students and their families?