The Elephant In The Classroom

The current education debate seems to have developed a laser-like focus on teaching. In response, some have offered serious commentary; others have resorted to humor; many others have expressed outrage at the seeming myopia.

Since common sense is said to be the least common of senses and a picture is worth a thousand words, here are my 1350 words—1000 of them in illustrations. 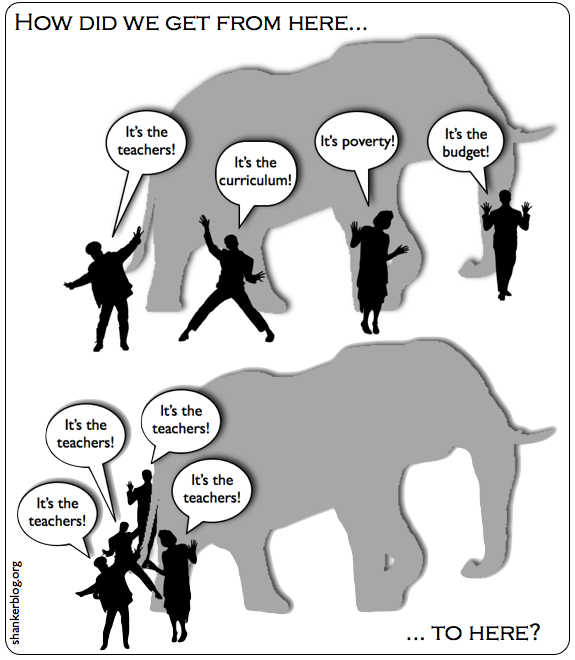 These pictures are inspired by the Indian parable of the “Blind Men and the Elephant," which tells the story of a king who presented an elephant to a group of blind men. After the men had explored a different part of the animal, they were asked to describe it to the king.

Afterwards, the blind men debated among themselves about the true nature of the elephant, each believing vehemently that their answer was the only true one, based (literally) on the evidence at hand. Eventually the disagreement became so fierce that the men began fighting with one another.

The parable warns against the shortcomings of an exceedingly narrow focus. The puzzle with our “Education Elephant” is that—even though the issue is complex, multifaceted, and so huge that it’s difficult to simultaneously address all of its aspects —teachers are in the spotlight, while other key aspects of a serious reform agenda continue to get short shrift.

Regardless of whether you are a teacher, a parent, a researcher… doesn’t the second vignette strike you as absurd? If so, how did we get here? Most importantly, how do we move forward?