Is The Motherhood Penalty Real? The Evidence From Poland

It has long been assumed that the residual gap in earnings between men and women (after controlling for productivity characteristics, occupation and industry segregation, and union membership status) is due to gender discrimination. A growing body of evidence, however, suggests that it may also reflect the effect of having children.

According to this research, employed mothers now account for most of the gender gap in wages (Glass 2004). In the U.S., controlling for work experience, hourly wages of mothers are approximately four percent lower for each child they have, compared to the wages of non-mothers (Budig and England, 2001). The magnitude of these family effects differs across countries, but, in general, men accrue modest earnings premiums for fatherhood, whereas women incur significant earnings penalties for motherhood (Waldfogel, 1998; Harkness and Waldfogel, 2003; Sigle-Rushton and Waldfogel, 2007; Budig and Hodges, 2010; Hodges and Budig, 2010; Smith Koslowski, 2011).

The size of the penalty seems also to vary by whether women and men are toward the top or bottom of the employment hierarchies of skills and wages, and it also varies across countries (England et al. 2014; Cooke 2014). The findings in this area are sometimes inconsistent, however, and suggest that there is a need to include a combination of skills and wages (England et al. 2014) and to choose carefully measures of job interruptions (Staff and Mortimer, 2012).

The so-called motherhood penalty is often mentioned in the context of certain social and workplace policies, namely universal prekindergarten, parental leave, and flexible workplace/work-time policies. As relatively little controversy surrounds the issue of universal prekindergarten care, below we will focus on arguments used by proponents and opponents of paid parental leave and flexible workplace/time policies.

Parental leave is an especially hot topic in the U.S., as it is one of the very few countries that does not guarantee any paid maternity/paternity leave. Both leading Democratic Party presidential candidates, Hillary Clinton and Bernie Sanders, as well as President Obama, have called for changes in the outdated Family and Medical Leave Act (passed in 1993), which only allows for up to 12 weeks of unpaid leave to care for a new child or a sick family member, and only covers “eligible” employees, which significantly reduces the proportion of workers entitled to the leave.

The main argument for introducing paid parental leave is that it would help new mothers stay in the labor force and maintain income while taking care of their newborns. On the other hand, it is argued, paid maternity leave might actually be linked to a larger gender pay gap (see here, for example). So, instead of helping, it might actually worsen women’s situation. It is, therefore, often argued that flexible work arrangements, and not parental leave per se, would allow women to balance more effectively work and child rearing. Recent research, however, shows that flexible work arrangements also may harm rather than help female employees. In a recent study, Christin Munsch demonstrates that mothers who ask for flexible work arrangements are perceived less favorably (less likable and committed) than are fathers who request such arrangements, even though child care was perceived as the most legitimate reason to ask for such flexibility.

In the context of these debates, it might help to look at the labor market evidence on parents and non-parents from Poland – a country that introduced paid maternity leave and other protections for new mothers as early as 1974. Even though the duration of the leave has varied over the years (between 16 and 26 weeks for single birth), it has been guaranteed by law long enough for researchers to measure its effect on labor market outcomes of mothers and non-mothers.*

The gender pay gap is one of the lowest among OECD countries (10.6 percent according to the most recent data available).

To examine the labor market situation of men and women, and describe whether this situation changes with changes in family status (i.e., having children at some point during the occupational career), we used POLPAN data. POLPAN is a nationally representative panel survey from Poland, which is focused on describing the nation’s social structure and changes therein.

It has been conducted every five years since 1988 (six waves total, last one in 2013). The original sample in 1988 was 5,817 respondents. Since 1998, new respondents from younger cohorts have been added to insure that the sample remains representative.**

Our analyses show that, for both males and females, the effect of having children on earnings is significant and positive, meaning that having a child is associated with income growth. However, for females, there is a significant and negative interaction between weekly working hours and the number of children. This means that, even though an increase in the number of weekly working hours translates into an increase in earnings, this effect is mitigated by the number of children one has – i.e., it is weaker for women with more children. Women working shorter hours actually benefit from having a child, but, for women working longer hours, having an additional child has an adverse effect. This effect is presented in the figure below. 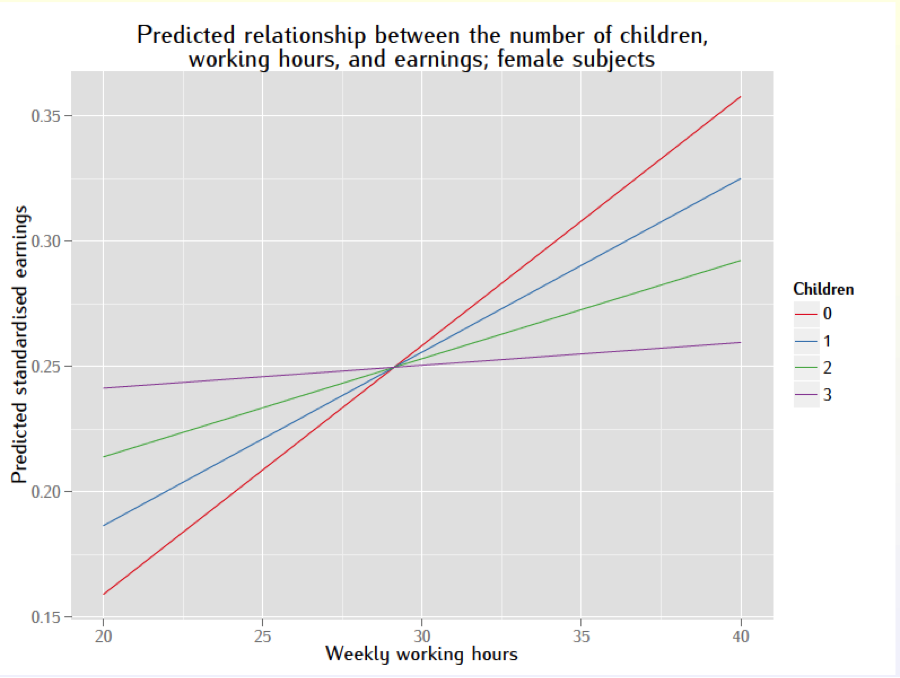 The POLPAN dataset also provides detailed information on each respondent’s individual job history, spanning the period 1988 - 2013 (at least for some subjects). Using these data, we established periods in which each person had a job and those during which he or she was unemployed.****

Using event history analysis, we found that women, in general, were at a greater risk of losing a job after a period of employment, and at a lower “risk” of coming back to work after a period of unemployment, than men with identical human capital characteristics. Women with children were at even greater risk, but only in regard to the second outcome (coming back to work). Their risk of losing their job was not affected by child rearing. When we took children’s ages into account, however, we found that mothers of younger children are at greater risk of losing a job than mothers of older children.

Although our analyses cannot provide an answer as to what causes the observed differences, it seems that women are still judged according to gender stereotypes and, even if they try to fit the ideal worker model while taking care of children, they are still penalized. That is, putting in longer hours at work might be perceived as an indicator of commitment and hard work in the case of men and women with no children, but as a sign of being unorganized or inefficient in the case of mothers.

It also seems (at least in Poland) that maternity protections are working – that is, mothers seem to stay employed at rates that are similar to non-mothers. By contrast, the likelihood of finding a job after a period of unemployment is significantly lower for mothers than non-mothers, an important factor that may have an effect on the gender pay gap. Finally, our results suggest that, once the period during which mothers are legally protected from losing their job is over, they are more likely to lose/quit their jobs, but it is not clear whether this is by choice or is due to impossible job demands, lack of affordable and accessible day care, and/or not fitting the ideal-type worker image.

* In 2013, maternity/paternity leave was expanded to 12 months and can be shared between both parents.

** In each wave of POLPAN, respondents are asked about their past and present jobs and, for each job, past or present, the survey collects information regarding the year and month the job began and ended, the number of weekly working hours, scores of the job on scales of job complexity, skill requirements, etc., and on-the-job earnings. Respondents are also asked detailed questions about their marital status and household composition. The number of children in our analyses has been derived from information on the household composition, however, which might cause a potential problem —some subjects may have children who do not live with them in the same household.

*** Information regarding sample sizes for each analyses, as well as detailed models, are available from authors on request.

**** “Having a job” was defined very broadly, not necessarily in terms of regular employment or self-employment; thus, “a job” amounted to any activity that gave