The Persistence Of School And Residential Segregation

School segregation is a frequent topic of discussion in U.S. education policy debates, and rightfully so (Orfield et al. 2014). The segregation of schools by race, ethnicity and income both reflects and perpetuates inequitable opportunities in the U.S. (e.g., Reardon and Bischoff 2011a; Kaufman and Rosenbaum 1992).

Needless to say, school segregation, within and between districts, is primarily a function of residential segregation – the spatial isolation of individuals and families by characteristics such as race, ethnicity, income, language, education, etc. There are several different ways to measure segregation, since it can be gauged by different traits (e.g., income, ethnicity), and at different levels – e.g., state, county, city, neighborhood, etc. The choices of variables can have a substantial impact on the conclusions one draws about segregation's levels and trends (Reardon and Owens 2014). One generalization, though, is in order: In the U.S., we have tended to gravitate toward “our own kind,” whether in terms of income or race and ethnicity. This disquieting reality is neither accidental nor mostly the result of individual preferences. In addition to the obvious historical causes (e.g., Jim Crow), segregation arises and is perpetuated by a complex mix of (often institutionalized) factors, such as the spatial patterning of housing costs, density zoning, “steering,” “redlining,” overt discrimination, etc. (e.g., Ondrich et al. 2002). And, finally, there is the stark fact that the nation's poor have very few choices in terms of housing and neighborhood, and many of those choices they do have are bad ones.

That said, it bears keeping in mind that the majority of families and individuals in America do indeed have the means to make meaningful choices about where and how they live, and even those who desire to live in an integrated neighborhood also weigh many other, meaningful factors – such as housing costs, convenience to stores and transportation, crime rates, schooling options, and so on. There is some evidence of progress in residential (e.g., Ellen et al. 2012) and school integration (e.g., Stroub and Richards 2013) by race and ethnicity, but increasing segregation by income (e.g., Reardon and Bischoff 2011b) Nevertheless, on the whole, integration tends to be unstable, while segregation tends to be more persistent.

One of the classic theoretical illustrations of how this operates is the well-known work of economist Thomas Schelling (1971). Schelling showed that even a mild preference that one’s neighbors be of the same race or ethnicity, such as a desire to avoid being a minority in one’s own neighborhood, could theoretically lead to very high levels of segregation, even if no one actively desires to live in a neighborhood that is heavily segregated. As we’ll see, this model obviously oversimplifies things quite a bit, but it does suggest one of the reasons why integration is difficult to maintain.

Schelling’s idea can be illustrated with a simple simulation, in which households of different colors make choices about relocation based on their preferences regarding the color of their neighbors. This simulation can be run with different specifications (e.g., tolerance thresholds and other variables), but one example is discussed below. The first graphic, is the starting state, in which red and blue households are randomly distributed throughout the grid (i.e., the "city's" neighborhoods are integrated), and 30 percent of the spots in the grid (there are 2,500 in all) are vacant. 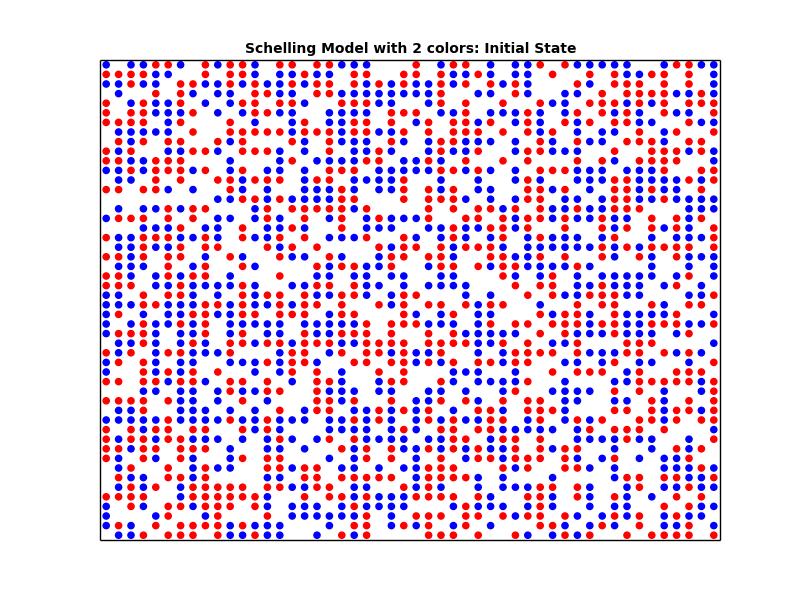 Let’s say the households in the first graphic are quite tolerant of diversity. They are perfectly content so long as at least 50 percent of their immediate neighbors are in their color group. If that threshold is reached, however, households will relocate to vacant areas on the grid.

As a result, even if our hypothetical city starts out integrated, random relocations can set in motion a "tipping" process that will, over time, generate very high levels of segregation. For example, if a given neighborhood is 50/50 red and blue, and one household moves, households of the color left in the minority will also start to move, setting off a chain reaction by which equilibrium – no household is in the minority in their immediate area – is achieved only via segregation, as depicted in the second graphic, below. 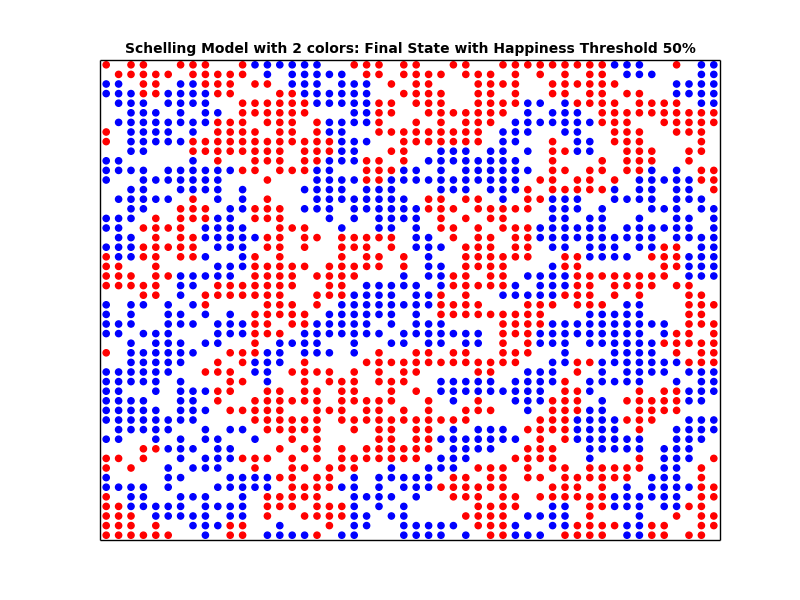 To be clear, this is only a simple simulation and, as such, has a value that is much more theoretical than empirical. Households, for example, make residential choices for many different reasons, and most selections involve trade-offs of some sort. And, of course, preferences regarding the racial/ethnic composition of neighborhoods vary widely among individuals and groups (for example, surveys of African Americans show a preference for “50/50” integrated neighborhoods, whereas whites show a lower tolerance for ethnic diversity– see, for instance, Krysan and Farley 2002).

Finally, to reiterate, residential segregation should never be viewed as primarily the result of individual preferences. Institutions and institutionalized behavior – including the failure to address multi-generational poverty and inequities in economic, educational and political opportunity – are much to blame, even when, on the surface, segregation corresponds with observable characteristics such as race and ethnicity.

All that said, the choices of individuals and families about where to live might inadvertently generate and perpetuate that segregation, even when segregation is not the desired outcome. This, along with the realities of housing prices and other exclusionary and constraining factors, means that integrated neighborhoods often are more likely to move toward segregation than segregated areas are to become integrated (Ellen 1999; Clark 1991).

It follows, then, that discussions about the current, alarmingly high rates of school segregation, particularly that between districts, are far more serious and complicated than is often suggested, and that the “maintenance” of residential integration – the primary precondition for school integration – may be even more difficult than its establishment.