There is a somewhat common argument in education circles that the focus on math and reading tests in No Child Left Behind has had the unintended consequence of generating a concurrent deemphasis on other subjects. This includes science and history, of course, but among the most frequently-mentioned presumed victims of this trend are art and music.

A new report by the National Center for Education Statistics (NCES) presents some basic data on the availability of arts instruction in U.S. public schools between 1999 and 2010.

The results provide only very mixed support for the hypothesis that these programs are less available now than they were prior to the implementation of NCLB. 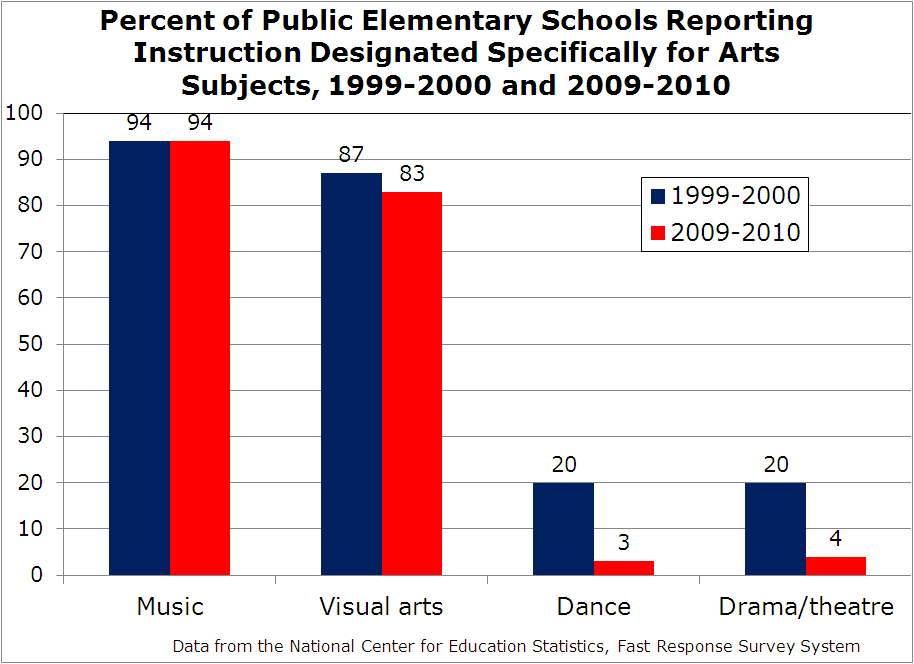 There was, on the other hand, a rather marked decrease in the proportion of elementary schools reporting that instruction was available in dance (decrease from 20 percent in 1999-00 to 3 percent in 2009-10) and drama (a similar decline from 20 to 4 percent). The degree to which these declines are due to NCLB-related factors cannot be examined using these data.

Moving on to secondary schools, the NCES data suggest even less change overall in the proportion of schools offering various arts programs. In the second figure, below, we see that availability is relatively stable for music and declining very slightly in the case of visual arts (the comparison year for secondary schools was 2008-09). In addition, unlike elementary schools, the proportion of schools reporting that drama and dance were taught remained relatively stable between 1999-00 and 2008-09. 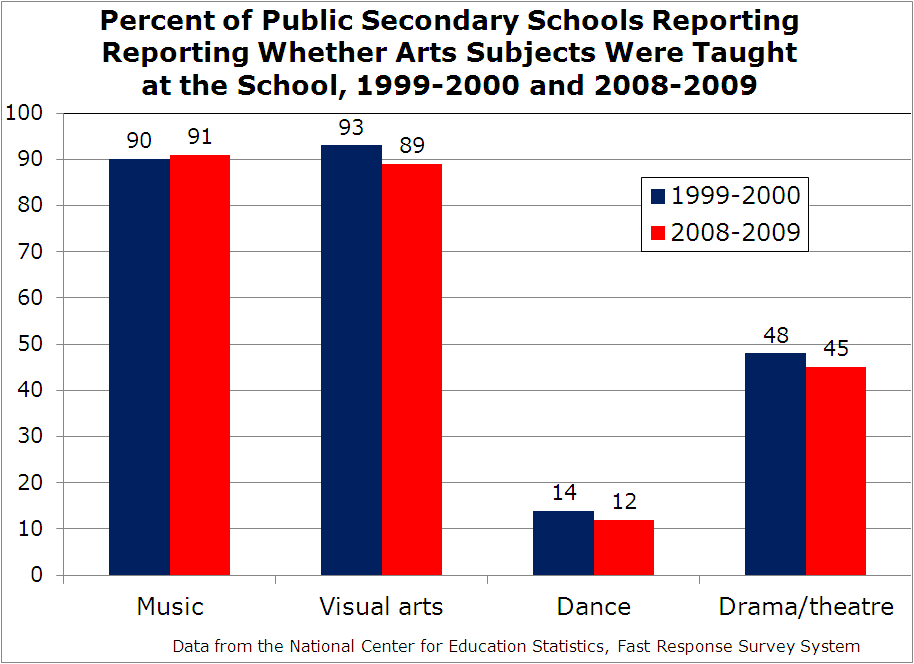 (One additional result not shown in the graph: The percentage of secondary schools reporting that coursework in the arts was a requirement for graduation increased from 52 percent in 1999-00 to 57 percent in 2008-09.)

There was, on the other hand, at least one noteworthy trend (also not shown in the graph) underlying these aggregate figures for secondary schools.

The same basic trend occurred in visual arts, with stable availability, on average, among all schools except those with 76-100 percent FRL-eligible, which decreased from 93 percent in 1999-00 to 80 percent in 2008-09 (it bears mentioning, once again, that these decreases are not necessarily a result of NCLB, at least not directly).

Among elementary schools, these proportions were stable across the free/reduced-price lunch distribution.

Finally, one should keep in mind that these data (especially those for secondary schools, which are from 2008-09) largely predate the major education cuts that have occurred over the past 2-3 years. It’s quite possible that these figures are a bit different now, as schools struggle to maintain core instructional services under severe budgetary restrictions. It's also important to note that these figures present the proportion of schools, not students.

All that said, there is only very limited support in these results for the idea that NCLB by itself led to a widespread decrease in the availability of the two “core” arts programs – music and visual arts.

Great post. I'm old enough to be a veteran of the 80s-90s arts wars: Jesse Helms, the NEA, all that. Those times forced the arts community and the arts education industry to build an advocacy infrastructure that exists even today. MENC (now NAME) had to make advocacy a core part of its mission. Of course, it helps that NAMM and other music industry sectors were looking to lose a ton of money if they didn't support music ed.

The debate is largely over: in reformy circles, you almost never hear the cries from back in the day to "get back to basics." People understand it's important.

This gives me hope. The conversation can change.

Nice post. It strikes me that schools have an incentive to report more art than there is given the basic discourse that art education is good. Every school I have worked in has cut back art and other electives. In most cases, this was done without eliminating the classes entirely. Is there a survey of teachers examining their self-reported experiences with changes in art education at their schools? I think it is worth asking what one might reveal. That said, I think almost everyone agrees art is a positive and so most schools will continue to resist severely cutting basic art education.