Our guest author today is Lisa Hansel, communications director for the Core Knowledge Foundation. Previously, she was the editor of American Educator, the magazine published by the American Federation of Teachers. This post originally appeared on The Core Knowledge Blog.

I’ll guess that pretty much all educators are aware of the “summer slide” or “summer learning loss." Even if there is a teacher who hasn’t heard those terms, all teachers have to deal with the consequences—wasting 2 to 5 weeks each fall reteaching content and skills. Naively, I thought the reteaching ritual was so widely lamented that parents, too, were aware of the summer slide. So I was shocked to see that 61% of parents do not believe that their children decline in reading ability over the summer.

The finding comes from a new survey of 1,014 parents with children ages 5–11. Conducted by Harris Interactive, it kicks off the summer campaign by Reading Is Fundamental and Macy’s to provide books to needy children.

Sadly, that 61% foreshadows all of the findings.

For example, playing outside is the top priority: “By a wide margin, parents of 5-11 year olds identify playing outside (49%) as the most important activity they want their child to do this summer. Reading books (17%) takes second place, followed by: relax and take it easy (13%), improve athletic skills (10%), travel (4%), work at a summer job (1%), and other activities (6%)." If forced to choose, I would also rank playing outside #1 and reading #2; I was lucky enough to do both pretty much every day as a kid. But reality settles in when we look at how kids are actually spending their time: “Parents of 5-11 year olds report that their child spent an average of 5.9 hours per week reading books last summer. This is lower than the time spent playing outdoors (16.7 hours), watching TV (10.8 hours), or playing video games (6.6 hours)." There’s a curmudgeonly voice in my head wondering how many of those outdoor hours were spent like this: 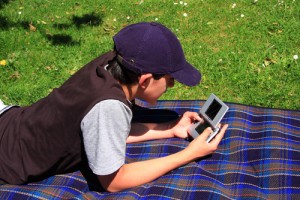 Six hours a week is definitely not enough time reading. Sadly, I think it shows how few children are finding books they love and having that magical experience of being absorbed in another world. With the right book, six hours a day doesn’t feel like enough. But according to the survey, I’m in the minority here: “Nearly six in ten parents of children age 5-11 say their child does just the right amount of reading during the summer (59%)."

But wait; it gets worse. There’s a 7% gap in what parents most want their sons and daughters to do over the summer. The number jumped out at me because 7% is the spread between female and male college degree attainment (i.e., in 2013, among 25- to 29-year-olds, 37% of females but only 30% of males had a bachelor’s). In this survey of parents, 7% is the pro-reading bias of parents for daughters (i.e., 21% of parents said reading was the most important activity for their daughters, but only 14% said as much for their sons). Coincidence? Only kinda sorta. There are stark differences in girls’ and boys’ summer activities: “Girls … spent an average of 6.6 hours per week reading books last summer, significantly higher than the average time spent by boys (5.2 hours). By contrast, boys spent an average of 8.0 hours per week playing video games last summer, compared to just 5.2 hours among girls."