For the better part of the past century, U.S. public education revenue has come predominantly from state and local sources, with the federal government contributing only a relatively small share. For most of this time, local revenue (primarily property taxes) comprised the largest proportion, but this began to shift gradually during the 1970s, to the point where state funds constituted a slightly larger share of overall revenue.

As you can see in the simple graph below, which uses data from the U.S. Census Bureau, this situation persisted throughout the 1990s and most of the 2000s. During this period, states provided roughly 50 percent of total revenue, localities about 45 percent, and the federal government approximately 5-8 percent. Needless to say, these overall proportions varied quite a bit by state. Vermont represents one of the most extreme examples, where, as a result of a 1997 State Supreme Court decision, education funding comes almost entirely from the state. Conversely, since Hawaii’s education system consists of a single statewide district, revenue on paper is dominated by state sources (though, in Hawaii's case, you might view the state and local levels as the same).

That said, the period of 2008 to 2010 was a time of pretty sharp volatility in the overall proportions contributed by each level of government.

During these two years, the federal contribution increased from about 8 percent to 12 percent (the blue line in the graph), while there was a corresponding decline in the state proportion – from 48 percent to 44 percent (the green line). These may sound like minor changes, but given the short time frame, the sheer size of the pot (around $600 billion), and the relative stability these shares exhibited in the past, they are worth discussing briefly. 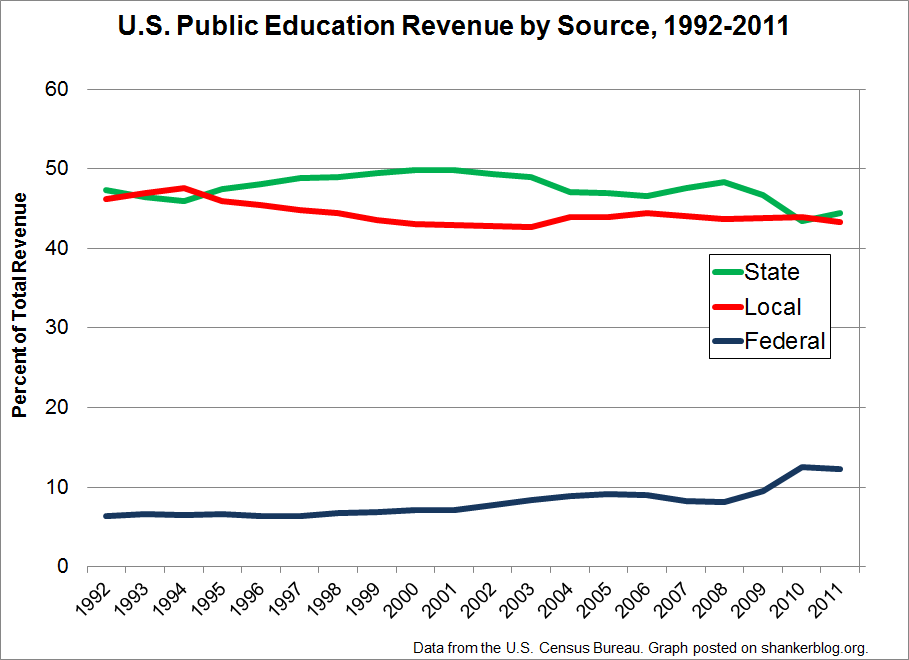 The big reason for the shift, as you have probably already guessed, is the recession, which affected not only the amount of education revenue, but where it came from as well. This played out in two major ways.

The first is the hit on state revenue. Growth in local revenue slowed considerably, but the level remained relatively constant during this period (in fact, it increased slightly, from $254 billion to $261 billion) – many localities, at least those whose residents could afford to do so, chose to make up for states' funding shortfalls. Still, high unemployment and other recession-based factors decimated states' budgets.

Overall, revenue from state sources declined from about $281 billion in 2008 to $258 billion in 2010, resulting in a smaller share of state funds devoted to public education (as well as pretty stunning education cuts in many places, including spending declines of roughly 20 percent in states such as California and Arizona).

But that’s not all – at the same time the recession was ravaging many states’ budgets, it was also the primary impetus for federal funding increases between 2008 and 2010. Actually, the overall jump was remarkably sharp - from $47 billion to $74 billion, or almost 60 percent. Much of this came from the American Recovery and Reinvestment Act (ARRA), commonly called the “stimulus package," which was intended to help mitigate the devastating impact of the crisis on education spending (see this GAO report).

The table below breaks down the change in federal funding by category between 2008 and 2010. For instance, there was a large spike (over 40 percent) in special education funding (IDEA), which was a major focus of the package’s education components. In addition, Title I spending increased almost 50 percent, and child nutrition (free/reduced-price lunch) jumped about 20 percent.

The largest change, however, occurred in the category of “other and nonspecified” revenue, which rose from $12 billion to $27 billion between 2008 and 2010. This category is comprised of “innovative programs, adult education and other federal revenues through the state," including (but not nearly limited to) Race to the Top.

In any case, the rise in the share of total revenue from federal sources may have ruffled some feathers, particularly among those who tend to buck at any expansion of the federal government’s role, but it remains to be seen how the relative contribution of federal funds will play out as data become available for subsequent years.

Most basically, ARRA funding was temporary (though it may have lasting impacts in many states in terms of equity).

If one looks at the most recent finance data (2011), which was released a few weeks ago, it's clear that federal education spending growth has leveled off (there was a modest 6 percent increase). At the same time, state revenues seem to have begun to recover, increasing slightly for the first time since 2007.

Thus, as you can see in the first graph, there was a small increase in the proportion of spending from state sources, and visible concurrent decline in that from federal sources. It will be interesting to keep an eye on this trend going forward.

NOTE TO READERS: This post originally stated that overall education revenue between 2008 and 2010 was "well over $600 billion." This was incorrect. Total expenditures were over $600 billion, but revenue was no higher than $594 billion. The post has been corrected. I apologize for this careless error, and thank Alexander Hoffman for pointing it out.