Educators are no exception. Roughly half of public school teachers have master’s degrees (NCES). Some employers provide assistance with tuition, but many teachers pay part or all of the costs themselves. Many job opportunities outside of education are attracting young graduates, burdened with high student debt, through student loan benefit programs. These programs may have the employer contribute additional money on top of their salary to repay the loan. That said, most teachers who go for their master’s degree do incur debt as a result, which in many cases is added to debt accumulated during their undergraduate studies.

And the amount of debt that teachers take on has been rising, at the same time that teacher pay has fallen further and further behind that of similarly-educated professionals.

Every four years, the U.S. Department of Education administers the National Postsecondary Student Aid Survey (NPSAS). The graph below presents total median debt from all education loans (graduate and undergraduate) for individuals who actually completed master’s degrees between 2000 and 2016 (see this New America report for an older analysis using these data). Note that the graph only includes people who incurred any debt during their studies, and the estimates for 2000-2012 are adjusted for inflation. 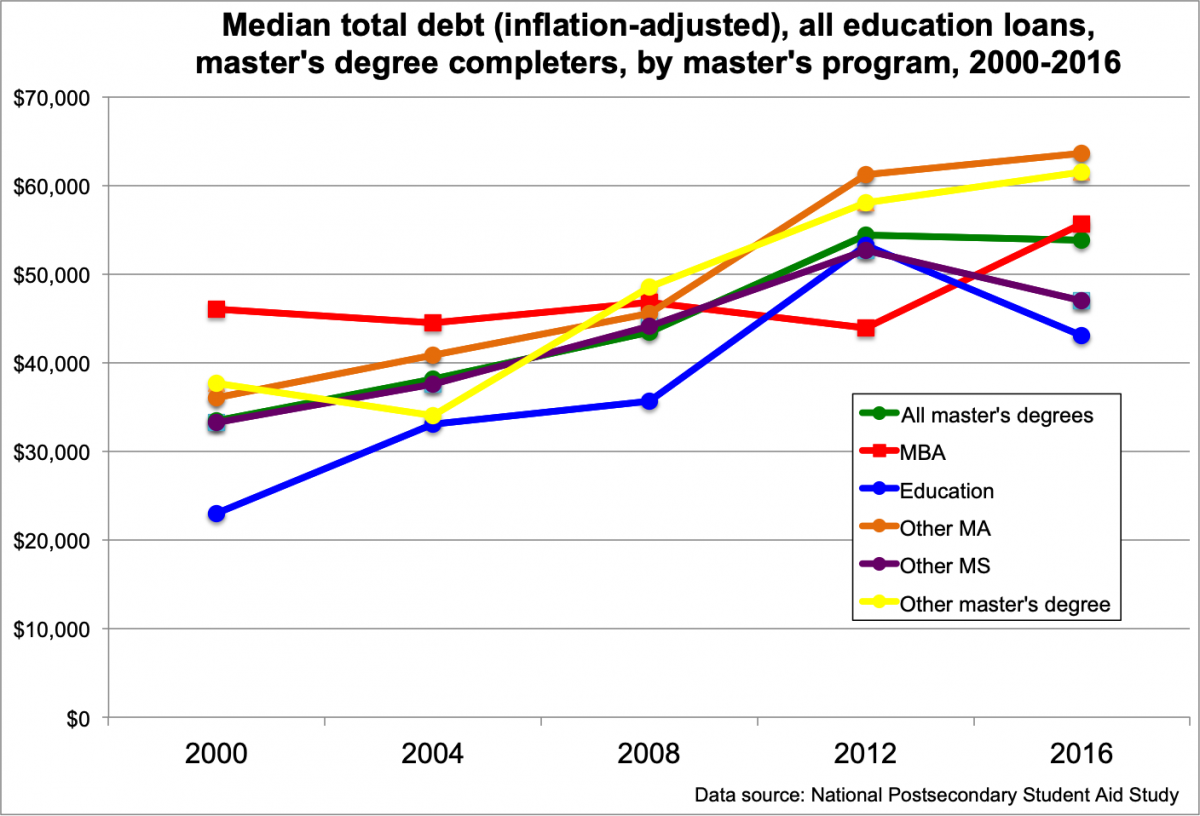 The graph shows that total debt has increased for every master’s program, but the increases vary quite a bit between programs. For example, the median total debt (inflation-adjusted) for an MBA completer in 2000 was roughly $46,000, compared with about $56,000 for their counterparts completing degrees in 2016 (an increase of 21 percent). The increase across all master’s programs was 61 percent. Teachers, however, saw an increase of 87 percent—the highest of all the groups. Those completing an education master’s degree in 2000 had total debt of roughly $23,000, compared with $43,000 in 2016. In short, the debt burden on teachers has almost doubled.

This is a particularly problematic situation for teachers, whose pay continues to stagnate. Allegreto and Mishel (2018) report that teachers earned about 20 percent less than other college graduates in 2017, and that, between 1996 and 2017, teachers’ wages actually decreased slightly, while those of other college graduates increased. In other words, the teacher pay gap is large and growing.

This parallel trend—increasing debt and decreasing ability to pay it off—also squares with anecdotal evidence. Teachers across the nation, for example, report working multiple jobs to stay afloat financially. In response, 2018 saw an explosion of teacher frustration against low pay and long hours demonstrated through teacher strikes across the nation.

How are educators able to afford the cost of living while also paying their student debt at the same time? Who will be able to afford to teach in classrooms anymore? Who will want to? So long as the costs of being a teacher are incongruous with the benefits, recruitment will be a problem. Teachers, like all workers, consider their financial circumstances when choosing their careers and whether to stay in them, and teachers’ high rates of debt coupled with their low relative salaries makes for a rather bleak outlook.

Some reasonable amount of debt is a fair trade-off for educational investment for people who go into a field where the remuneration is substantial, but the current trade-off is not sustainable for teachers. What teachers (and other workers) face is crippling payments that prevent young adults and minority students from achieving financial stability. There is a mismatch in the timing of the arrival of the benefits of having a college degree, and the costs of college.

One solution would be to restructure our income-based repayment option for student loans. The current system is based on the previous year’s income and only allows for change if the borrower submits evidence that their income has changed—thus not allowing for adjustments in line with impacts to income as they arise. Within this system, there are several barriers to accessing this option. This includes the lack of swift adjustments in payments in response the “high-frequency shocks that characterize young people’s earnings” (Dynarski 2013). With a well-structured repayment program, borrowers would be insured against micro and macro level shocks. Interest rates would appropriately account for the government’s administrative and borrowing costs, in addition to default risks, and this could make the program self-sustaining.

With a new repayment system, payments would be spread out during the low-earning early years, ensuring recent graduates are not hit with the brunt of their repayment during the onset of their career—often a time in which they are least able to handle them. Students would instead repay their loans on a schedule that adjusts with the flexibility of their income

Other options include extending repayment durations to up to 20 years, or offering student-loan borrowers tax relief like that for homeowners, or permitting student loan debts to be discharged during bankruptcy—which would call for more sustainable solutions. Another option would be an expansion of the Teacher Loan Forgiveness Program, which requires that you teach full-time for five complete and consecutive academic years in a low-income school (among other requirements) in exchange for forgiveness of up to $17,500 in student loans. Similar state and local programs, especially in areas suffering from acute teacher shortages, could also be considered. Another program to transform would be the Public Service Loan Forgiveness Program. The program requires that you spend 10 years teaching, nursing, working for a government agency or a qualified nonprofit organization full-time, while also making 120 monthly payments against your student loans, and then the government would forgive whatever loans are left. This has been found to be problematic because Department of Education data showed that 99 percent of loan forgiveness applications were denied. How can educators find debt relief if such a low number of teachers are approved for the program, and even a smaller number know about the program’s existence in the first place?

These are only suggestions, and their feasibility can and should be debated, but the big point here is that the current situation is unsustainable, particularly for vulnerable students in the higher education system. Education should be inclusive, but not at the cost of financial security.

Wow! This was a great read. I

Permalink
Wow! This was a great read. I agree with you that we need more resources and options for teachers and prospective teachers trying to enter the education field. My favorite part of this blog (which you proudly stated), was your last sentence: “Education should be inclusive, but not at the cost of financial security.” Thank you for continuing the conversation.
Submitted by Armani on February 5, 2019

Very well put. I think this

Permalink
Very well put. I think this topic is very important to have based on the question you raised around how educators can afford the cost of living while paying off their student debt at the same time. It’s close to impossible and with articles like this, the conversation can get going and hopefully a long-term solution can be made.
Submitted by Aisha S. on February 5, 2019

Permalink
Great post, Bilan. As an educator (with a Master's), student loan debt is by far my biggest financial concern. It can really add to the stress of the profession, which is already very stressful. They say that most new teachers leave the profession for the private sector by year 5. With these numbers, I can understand why! Thanks for the insights.
Submitted by Ron on February 26, 2019