Update On Teacher Turnover In The U.S.

Every four years, the National Center for Education Statistics provides the public with the best available national estimates of teacher attrition and mobility. The estimates come from the Teacher Follow-Up Survey (TFS), which is a supplement to the Schools and Staffing Survey (SASS), a much larger national survey of teachers that is also conducted every four years. Put simply, the TFS is a sub-sample of SASS respondents, who are contacted the following year to find out if and where they are still teaching.

The conventional wisdom among many commentators, particularly those critical of test-based accountability and recent education reform, is that teacher attrition (teachers leaving the profession) and mobility (teachers switching schools) are on the rise. As discussed in a previous post, this was indeed the case, at least at the national level, between the 1991-92 and 2004-05 school years, but ceased to be true between 2004-05 and 2008-09, during which time attrition and mobility was basically flat. A few months ago, results from the latest administration of the TFS, which tracked teachers between 2011-12 and 2012-13, were released, and it’s worth taking a quick look at the findings.

As you can see in the graph below, the proportion of public school teachers who left the profession entirely (“leavers”), as well as the proportion who switched schools (“movers”), were again relatively flat between 2008-09 and 2012-13 (and the change is not statistically significant). 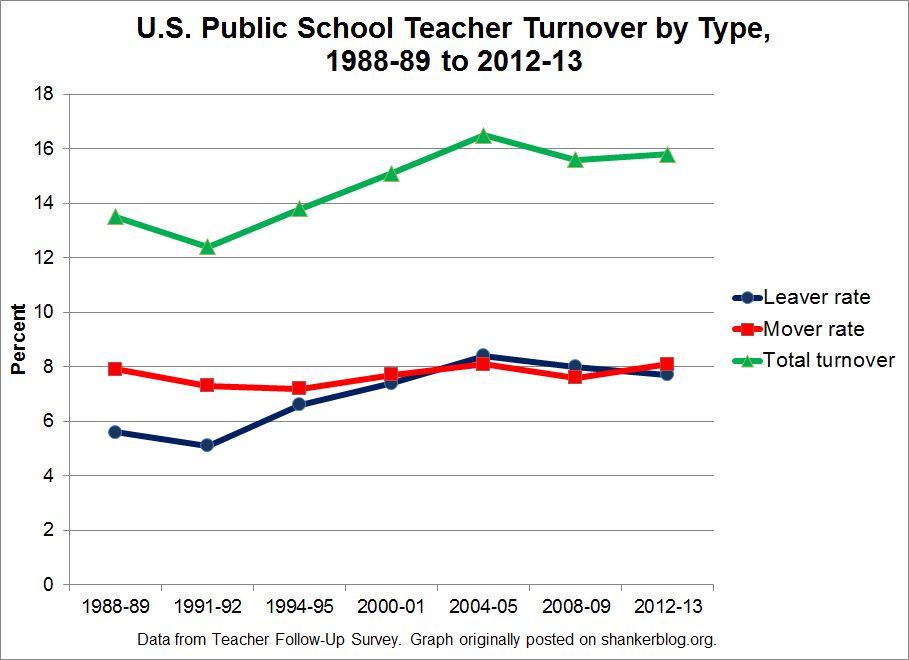 In other words, after almost 15 years of steady increase, particularly in the proportion of teachers leaving the profession, teacher turnover (leaving plus moving) has been fairly stable since 2004-05.

Now, it bears mentioning that the period of time between the 2008-09 and 2012-13 school years included the brunt of the Great Recession. During these years, teachers, like their counterparts in other occupations, were no doubt less likely to change professions or even apply for a change in teaching position. We cannot precisely estimate the impact of the recession on teacher turnover, but the figures presented above could have looked different in different economic times.

Another interesting note about the trend between 2008-09 and 2012-13 is the fact that retirement increased a bit. Specifically, the proportion of leavers who reported having retired increased from 27.8 percent to 38.3 percent (this proportion was flat between 2000-1 and 2008-09). This does not exert a huge influence on the overall leaver trend (about a percentage point), but it bears mentioning, particularly given the slight decline in the leaver rate between 2008-09 and 2012-13.

Moving on, as is often the case, these national estimates mask considerable underlying variation. As would be expected, turnover was higher among younger and part-time teachers, as well as those teaching in charter versus regular public schools.

Moving and leaving are also associated with student characteristics. As presented in the figure below, teacher turnover varies by the proportion of schools’ students eligible for free-/reduced-price lunch (FRL), a very rough proxy for being low-income. 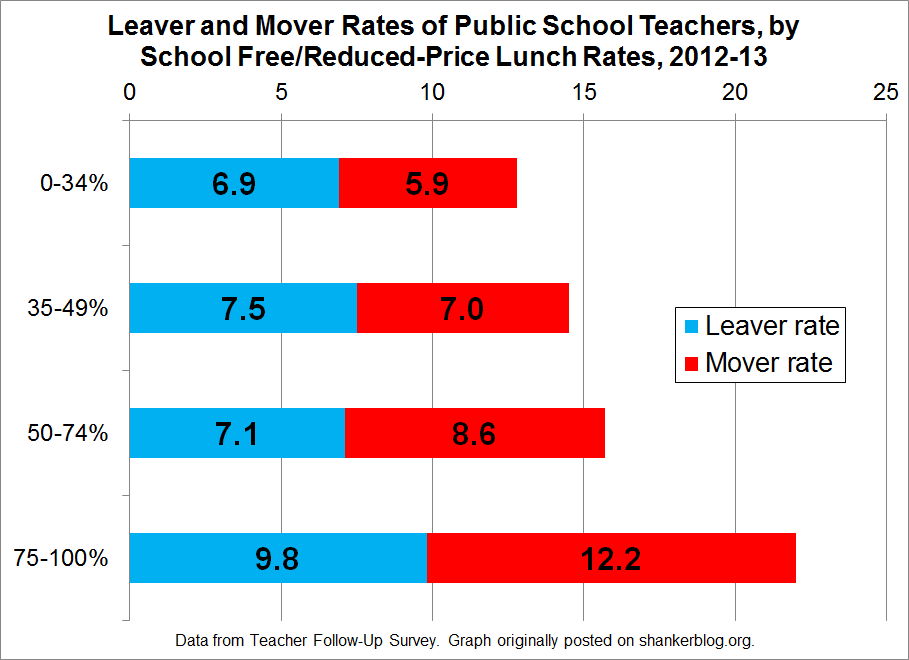 Another interesting finding from the TFS is the difference in turnover rates by teacher ethnicity. Specifically, total turnover among white, non-Hispanic teachers was 15 percent (7.5 leaver, 7.5 mover), compared with 21.8 percent (10.1/11.7) among black teachers and 20.6 percent (8.0/12.6) among Hispanic teachers. This is, however, due in no small part to the fact that minority teachers are disproportionately employed in higher-poverty schools, where attrition and mobility are more common among all teachers, regardless of race.

Overall, then, teacher turnover, in both its attrition and mobility “forms," was quite stable between 2007-08 and 2012-13, although, as usual, there is a great deal of variation underlying the national estimates. And, although it is very difficult to determine the extent to which economic circumstances—the Great Recession in particular—influenced this trend, weakness in the general job market during this period is likely to have played a role.