What Do Teachers Think About How Teachers' Unions Affect Schools?

You don’t have to follow education policy debates for long to notice that teachers’ unions invoke a wide range of opinions; they are admired by some, and abhorred by others. Although they are often portrayed as one big monolithic organization (“the teachers’ union”), there are in fact over ten thousand local teachers’ unions across the nation. All of them are led by teachers who are elected by teachers, their contracts are approved by teachers, and their policy advocacy tends to reflect the preferences of their members, who are teachers.

Given that the vast majority of U.S. students are educated in public schools, which are funded by tax dollars, it makes sense that public scrutiny of teachers’ unions tends to be more extensive than it is for, say, steel or auto worker unions. The leaders of teachers’ unions and their members understand (even welcome) this. Communicating with parents and the community is a big part of being a teacher. People are very serious about education, and rightfully so. Everyone should participate in the debate over how to run our schools. I dare say most teachers would agree that this debate, while sometimes overly contentious, has a net positive effect.

Yet all the debate about the effect of teachers’ unions often omits an interesting (and, perhaps, important) question: What do teachers think about this issue? You don’t have to agree with all policy stances taken by teachers’ unions; such disagreement is not “teacher bashing,” as is sometimes alleged. If, however, you respect teachers and their opinions about how to run schools, and if teachers tend to agree with their unions, then it makes sense at least to keep this in mind when expressing opinions about their unions.

Representative surveys of teachers are not easy to find, but one exception is an excellent annual poll by Education Next and the Program on Education Policy and Governance at Harvard University, last conducted in 2017.

The poll asks many of the kinds of education-specific questions that you won’t find elsewhere. One of those questions is about whether respondents think that teachers’ unions have a positive or negative effect on schools. The figure below presents the 2017 distribution of responses overall, as well as separately for teachers, parents, Republicans, and Democrats (the actual question wording is included in the figure’s header). 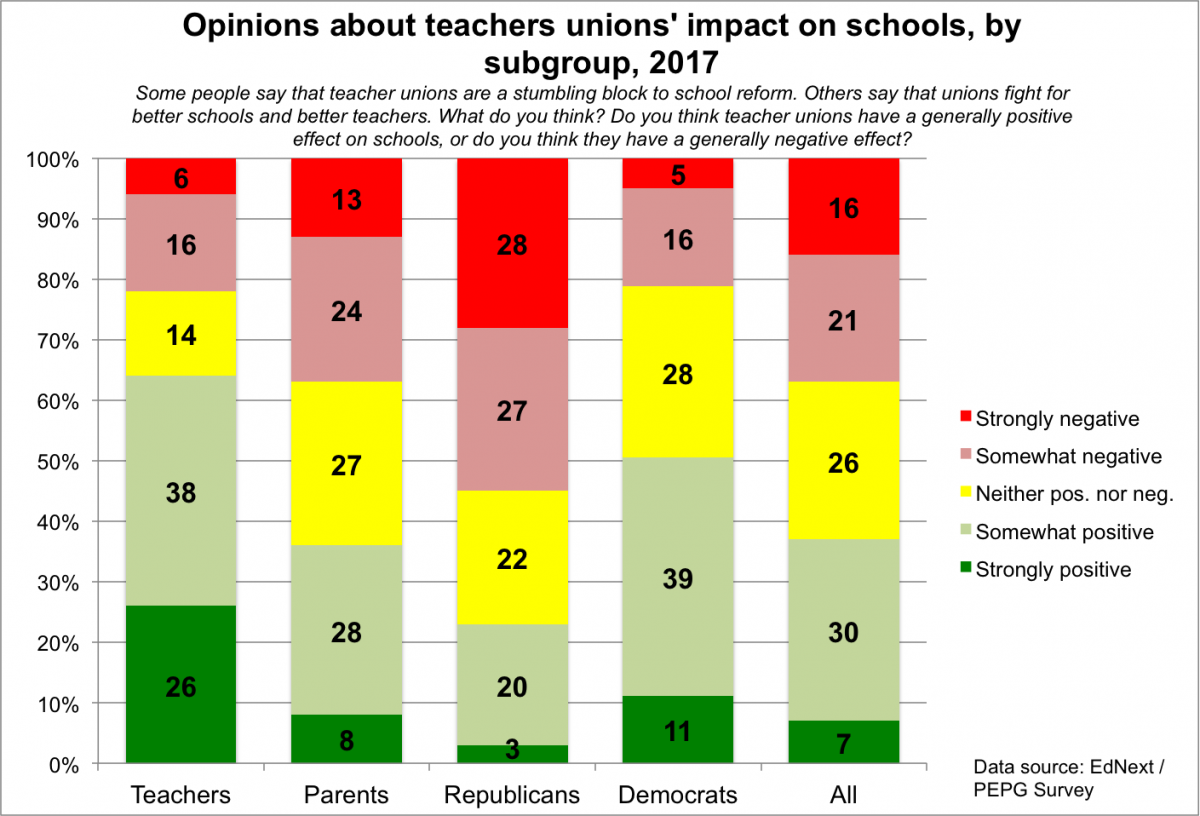 Unsurprisingly, these negative opinions about the impact of teachers’ unions are less common among teachers than they are among the other subgroups in the survey (not all of the subgroups broken out by the survey are shown in the figure). For instance, 37 percent of both parents and respondents overall feel that unions have a negative effect. It is also not at all shocking to find a partisan divide on this issue. Only 53 percent of Republicans believe that teachers’ unions have a negative impact on schools, compared with 21 percent of Democrats.

(One final interesting finding here is the proportion of all respondents who answered that the union effect was “neither positive nor negative.” The 26 percent is higher than for virtually any other comparable question in the survey. It is a very defensible answer.)

Given all the recent debate about teachers’ unions, one might wonder whether these results have changed over time. Fortunately, EdNext/PPEG has actually been asking a version of this question since 2009. However, the question wording changed substantially in 2011, and the order of responses changed in 2013. Both of these changes seriously complicate comparisons over time, and makes for somewhat tedious interpretation, so I will focus on the results for just the past five years, when question and response order were constant. These results are presented in the graph below. 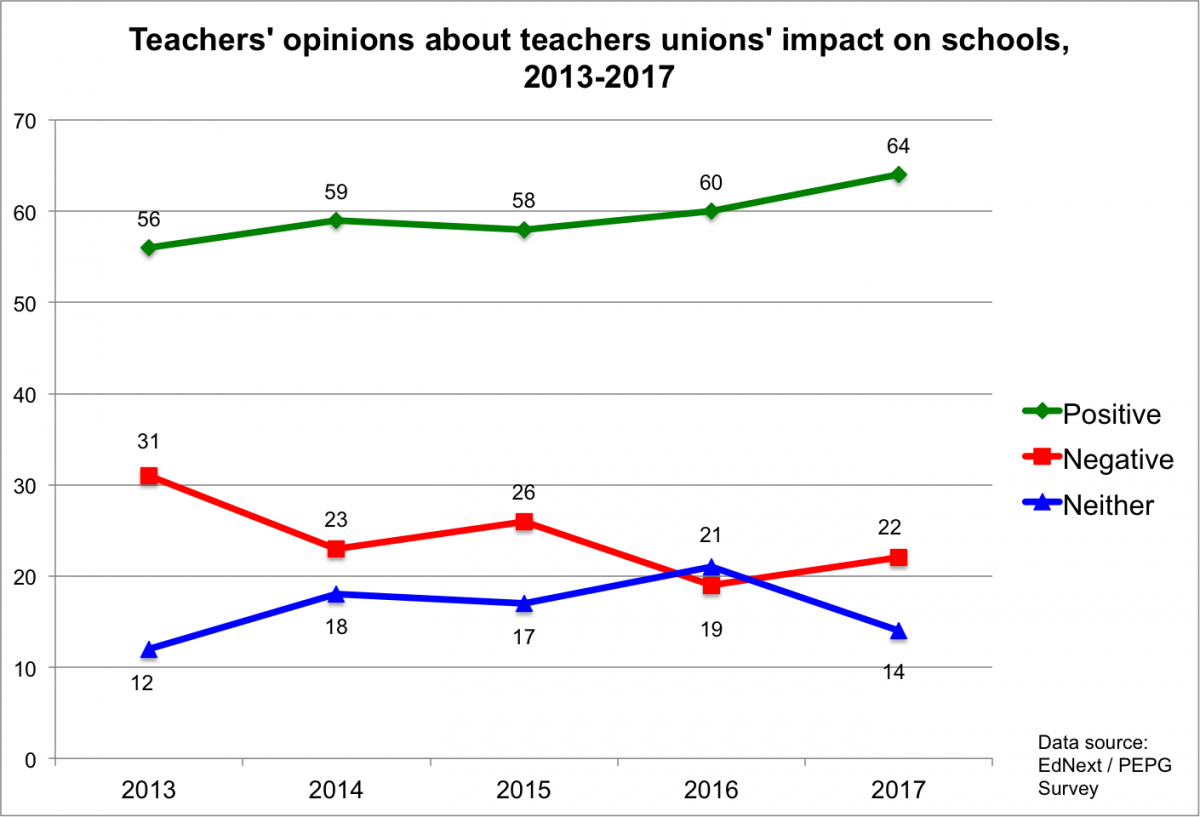 The proportion of teachers who think their unions have a positive effect on schools rose eight percentage points between 2013 and 2017, while the share of their counterparts with negative opinions of unions' impact declines by roughly the same amount. Finally, the proportion of teachers expressing "neither positive nor negative" opinions fluctuated a bit, but was roughly the same in 2017 compared with 2012.

It is not implausible to argue that the increase in positive assessments is due to the fact that this time period was one during which rather drastic and controversial reforms, such as Common Core and teacher evaluations, were being implemented (and ESSA was being reauthorized). Perhaps teachers saw their unions take an active stance on these issues and changed their opinions about the organizations representing them. But this is little more than speculation.

In any case, teachers’ responses to this question show that teachers are not a monolith when it comes to opinions about their unions’ effect on school. There is disagreement (as there should be in any democratic organization). At the same time, though, a near two-thirds supermajority of teachers believe their unions have a positive effect on schools, and this proportion may have increased meaningfully over the past five or so years.