Who Should Be Allowed To Teach?

The conventional wisdom is that Americans are becoming more tolerant over time. One of the common ways to measure this tolerance is to ask survey respondents whether they would be willing to have members of different groups – for example, people with different ethnicities, religions, sexual orientations, etc. – serve in positions of societal importance or trust, such as President, family doctor, or, of course, teacher.

Granted, people are not always forthcoming when asked sensitive questions of this sort, and one should always regard the distribution of responses with caution. That said, from an educational perspective, it might be interesting to take a look at Americans’ stated views about whether members of different groups should be allowed to teach, particularly whether and how these opinions have changed over time.

There are four versions of the X (you’ll have to excuse the sexist and outdated language): “a person who is against all churches or religion” (in the graph, labeled “anti-religionist”); “a person who believes that blacks are genetically inferior” (“racist”); “a person who advocates doing away with elections and letting the military run the country (“militarist”); and “a man who admits that he is a homosexual” (“gay”).

The graph below depicts the percentage of respondents who say that “members” of these four “groups” should not be allowed to teach, between 1972 and 2012. The only other possible non-missing response is the converse – that they should be allowed to teach - so you can infer these proportions from those presented in the graph. 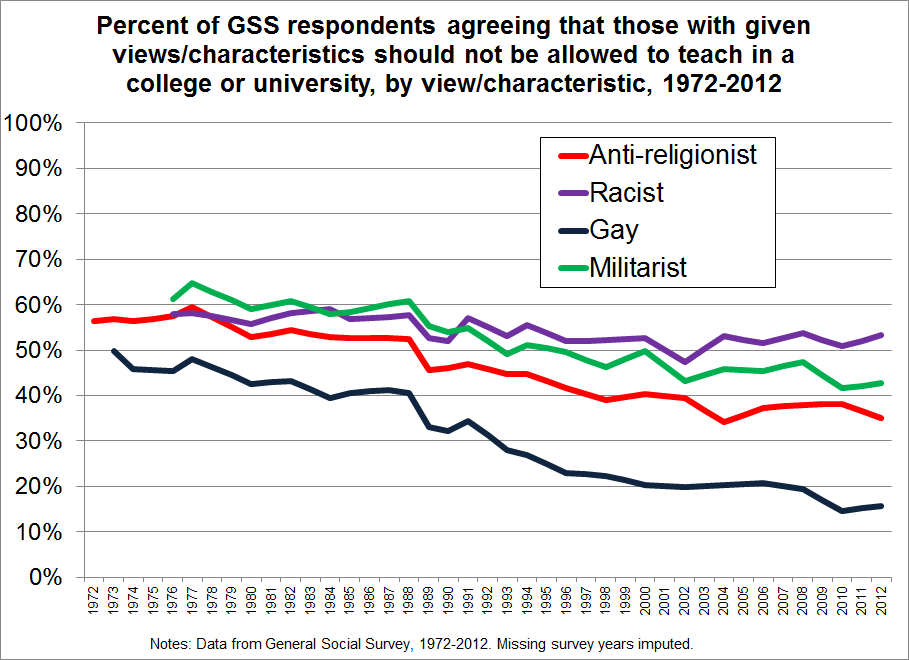 Needless to say, only one of questions – the question about "a man who admits he is a homosexual" – queries respondents’ beliefs about who should be teaching based on who people are, rather than what they believe. And, in this case, the proportion of Americans who believe that openly gay men should not be allowed to teach declined quite steadily between 1972 and 2012, from about 50 percent to roughly 15 percent (though 15 percent is still a pretty big chunk).

In contrast, the results for the question about racists – i.e., those who “believe that blacks are genetically inferior” – haven’t actually budged much. In both 1976 and 2012, between 50 and 60 percent of respondents believed that these individuals should not be allowed to teach, which means that 40-50 percent of respondents state the opposite viewpoint. This is rather surprising, at least to me.

Finally, there is one more question that is wording slightly differently, and so I present it in a separate graph. This one is worded as follows: “I should like to ask you some questions about a man who admits he’s a Communist. Suppose he is teaching in a college. Should he be fired, or not?" The wording of this question (“should be fired” versus “should/shouldn’t be allowed to teach”) is a bit stronger than that of the previous four..

The distribution of responses (the percent of respondents who agree an openly Communist teacher, at least a male teacher, should be fired) is presented in the second figure, below. 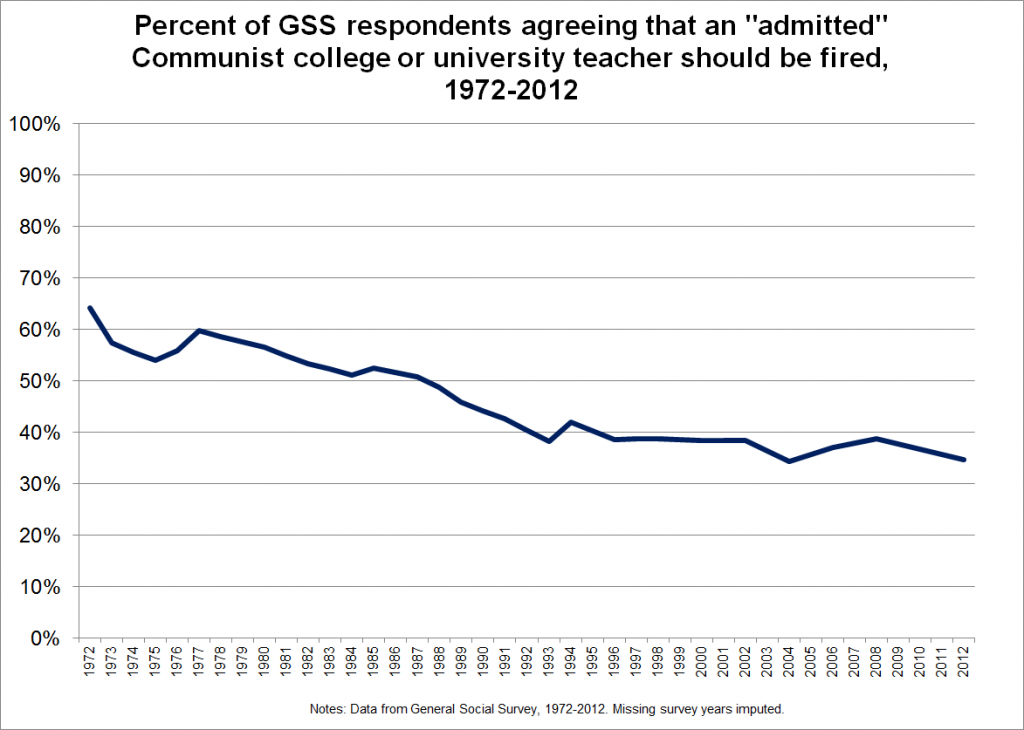 Once again, there is a decline here, from around 65 percent in 1972 to about 35 percent in 2012, but a pretty sizeable group of respondents (over one-third) admits to thinking that a professor who says he is a Communist should be fired.

To reiterate, answers to these types of “politically sensitive” questions are not always truthful, and absolute levels of agreement/disagreement should be taken with a grain of salt. And whether or not these answers would change if respondents were queried about K-12 teachers is an open question.

That said, it’s fair to conclude, at least in my opinion, that the decline in the proportion of respondents who admit that gay men should not be allowed to teach is a good thing, though the proportion still holding out is too high (and, again, might very well be higher “in reality," due to people not giving forthcoming answers).

Beyond that, the interpretation of these results is not entirely straightforward. On the one hand, I consider it a positive trend that decreasing proportions of respondents say that people should not be allowed to teach based on what they believe. One need not agree with Communists, or anti-religionists, or people who advocate for military authoritarianism, in order to agree that people should not be excluded from a profession due solely to their political or spiritual views.

On the other hand, however, I would be lying if I said that I had the same reaction to the results about those who believe that black people are genetically inferior. This is, of course, because I find repulsive the idea of viewing a given ethnic group as genetically inferior, and that anyone who believes it has no business teaching in a college or university (especially since they might have to teach students of color). But there are those who believe just as strongly, for example, in religion or even Communism, and could not they offer the same argument?

Perhaps they could (though I admit that I personally wouldn’t be convinced - it's one thing for a college teacher to believe in Communism [or any other political ideology], but quite another for that teacher to regard some of his/her students as inherently inferior to others based on ascribed characteristics).

In any case, I have no original, incisive conclusion to offer here: Free speech and democracy are wonderful, but they are not without their complications and contradictions in practice.