As first reported by the New York Times, the New York City Department of Education released a dataset this past Sunday, which lists the number of potential teacher layoffs that would occur in each school absent a budget infusion.

Layoffs are a terrible thing for schools and students, and this list is sobering. But the primary impetus for releasing for this dataset appears to be the city’s ongoing push to end so-called seniority-based layoffs, and its support for seniority-ending legislation that is now making its way through the state legislature. One of the big talking points on this issue has always been that layoffs that take experience into account would hurt high-poverty schools the most, because these schools tend to have the least experienced teachers. As I discussed in a prior post, Michelle Rhee is making this argument everywhere she goes, and it was one of the primary themes in a new report by the New Teacher Project (released last week). Although I have not heard city officials use the argument since the database was released over the weekend, similar assertions have very recently been made by Mayor Bloomberg, former Chancellor Joel Klein, and current Chancellor Cathie Black.

I find all this a bit curious, given that the best research on the topic finds that the argument is untrue (including a study of New York City, and a statewide analysis of Washington [also here]). Now, it is at least possible that, if layoffs were conducted strictly on the basis of seniority, higher-poverty schools could end up bearing the brunt of dismissals. This is almost never the case, however – layoffs in almost every district proceed based on a variety of criteria, among which seniority is only one (albeit often the most important).

It is fortuitous, then, that the city’s dataset provides an opportunity to test the claim that the “worst-case scenario” – over 4,500 layoffs using current New York City procedures – would hurt high-poverty schools the most. Let’s take a look.

I merged the city’s layoff dataset (which provides the percent of each school’s teachers that would be fired if all the layoffs proceed) with the city’s dataset on school poverty rates (2009-10). A bunch of schools on the layoff list were missing from the poverty dataset (many opened this year), so I gathered poverty rates manually for as many of these schools as I could (the rest are excluded).

In the scatterplot below, each blue dot represents a school. The x-axis is percent of students in poverty (free/reduced lunch), and the y-axis is the percent of the school’s teachers laid off.   There is some bunching towards the right because, of course, most of the city’s schools have high poverty rates.  The red line in the middle is the fitted linear relationship between these two variables. 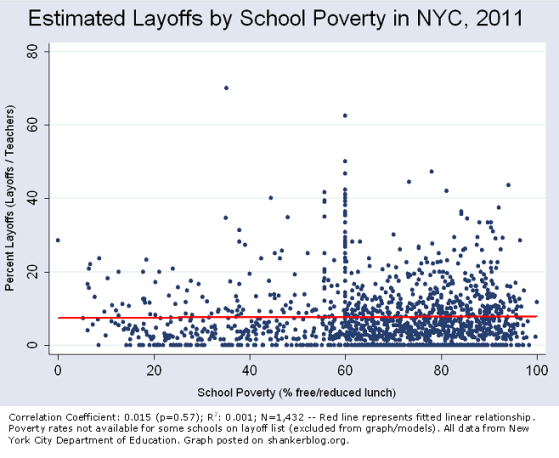 Layoffs appear rather dispersed between schools, while the correlation coefficient is miniscule, and not statistically significant at any level (see the figure’s stub). This is also evident in the red line, which is basically flat. In short, based on this quick analysis (as well as previous research on NYC layoffs), there seems to be little discernible relationship between school-level poverty and the percent of teachers who would be laid off.

(You may notice several schools [around 50, actually] clustered at the 60 percent poverty level. Most of them are new, and this may be how the city codes some schools' poverty rates before official enrollment figures are available. Removing these schools does not alter the results.)

Just to give an easier visual of this relationship (or lack thereof), the graph below presents the average layoff (percent of teachers) by school poverty, with schools divided in poverty quartiles. 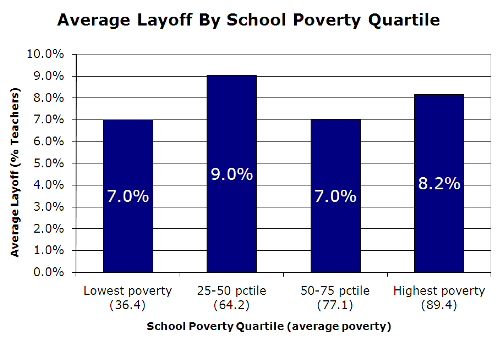 Once again, the graph indicates that the effect of the layoffs, at least in terms of their incidence, is fairly evenly dispersed between higher- and lower-poverty schools.

These results reflect the fact that so-called “last in, first out” policies do not actually proceed in that manner. It might also, perhaps, reflect a weaker relationship between teacher experience and school poverty in New York City than is typically found elsewhere.

In any case, those making the argument that seniority-based layoffs “hurt poor children” should stop. There is no evidence for this claim beyond a couple of simplistic analyses that assume – incorrectly – that layoffs are based strictly on years of service. (For the record, the above-mentioned New Teacher Project report did cite the Washington and NYC studies in their discussion of the relationship between layoffs and value-added scores, but ignored these papers in their section on differential impacts by poverty.)

The available evidence – including that from a massive projected layoff in the largest school district in the nation – finds otherwise. The irrefutable fact about this situation: Layoffs hurt all children

Personally, I support the idea of finding a better way to conduct the inherently awful practice of mass teacher firings. But let’s debate the alternatives with accurate information, and stop evoking, without clear evidence, society’s concern for the wellbeing of poor kids in order to advance policy agendas. In the long run, it does nothing to help the cause.

Thank you for the analysis on this subject, I was very curious to see that correlation looked at.

I agree that the data points away from any direct correlation between high poverty and high layoffs; however, I think that saying that layoffs hurt lowest income schools the most is not unreasonable.

First, Generally speaking, higher income students have more stable homes, and school is not the only constant in their life. At many high poverty schools, including the one I teach at, the school (and the teachers there) are that constant.

I always like to tell a story from my first year teaching to emphasize this point. I took my first day off from school in November, since I got a pretty bad cold. I called in sick. The next day, my students showed up to class and all told me that they thought I had left them, or quit, or something like that, simply because I hadn't shown up one day. Let's be honest here, a high school student at an affluent school in NYC isn't going to care much if their teacher changes, and if their teacher does change, odds are that the school is going to attract another great teacher.

This brings me to a second point: The level of a replacement teacher at a low income school is going to be worse than at a high income school. Therefore, even if both the low income and high income schools are losing young teachers at the same rate, the shuffle of more veteran teachers that will inevitably happen will have the better teachers end up and the more affluent schools, since its where they want to be. I think that this is the stronger of the two points, and the one that is ignored in this.

It looks like your analysis includes a nubmer of schools who won't lose any teachers. For the sake of your regression analysis, I would probably make sense to remove those schools. (maybe you already did that?)

Why would it make sense to take away schools that aren't losing any teachers? That's part of the most valuable information. If there are affluent schools not losing any teachers, and high poverty ones losing a lot of teachers, that's important to see (which, according to this data that includes all the schools, doesn't appear to be the case)

Links to both datasets are actually embedded in the post. The projected layoff dataset is in the first sentence, first paragraph. The school poverty dataset (absent the schools that he looked up individually) are in the fifth paragraph, second line.

Jacob,
Thanks very much for your comment, but Sam is correct - if we're trying to see how the incidence of layoffs differs by poverty (or any other variable), we have to include schools without layoffs in the analysis.

Sam,
I think it's entirely plausible, if not likely, that layoffs have a greater adverse impact on high-poverty students. This post addresses the question of whether there are *more* layoffs (as a proportion of teachers) in higher-poverty schools, as some people are claiming. So, while it is true that layoffs hurt all children, I might have been more clear about what I meant, which is that the *incidence* of layoffs (as currently conducted in NYC) is roughly equal in higher- and lower-poverty schools.

You, on the other hand, are asking a different (and perhaps more important) question: Whether layoffs, when they do occur, are more harmful to poorer students/schools. I cannot address your question using this dataset, but there is evidence that you're correct - for example, teachers in high-poverty schools tend to improve more slowly and inconsistently (at least according to estimates from growth models), and many poorer schools tend to have trouble attracting and retaining good candidates, as you note. If true, this would seem to suggest that we should do whatever we can to avoid layoffs entirely, especially in a district like NYC, where so many of the schools are high-poverty relative to the typical public school district.

Thanks again to both of you.

This is true of NYC schools; it's not true of all school districts.

In my district, SFUSD, layoffs unambiguously impact high-needs schools more. This appears to be true in LAUSD.

Mind you, I don't believe the answer is overturning seniority. But ignoring the reality that low-seniority teachers tend to be clustered at high-needs schools is as unhelpful as value-added assessment schemes.