Basic Facts About Who Pays State And Local Taxes

Taxes, particularly income taxes, are among the most divisive and controversial issues in any nation, and this makes perfect sense – people care about how much they pay and how it is spent. Yet most of the constant, heated debate about taxation focuses almost entirely on federal taxes, with state and local taxes receiving far less attention.

Periodically, the Institute on Taxation and Economic Policy (ITEP) releases an important and interesting analysis of who pays state and local taxes – that is, the tax burdens among households with different incomes. The latest version of this report was published last year. The findings are worth knowing for anyone interested in public sector services, including education.

ITEP reports that state and local taxes overall are highly regressive, which means that poorer households pay a larger share of their income in state and local taxes than do higher income households. This finding is summarized in the figure below, which is taken directly from the report (note that these are national averages, and that the breakdown varies by state). 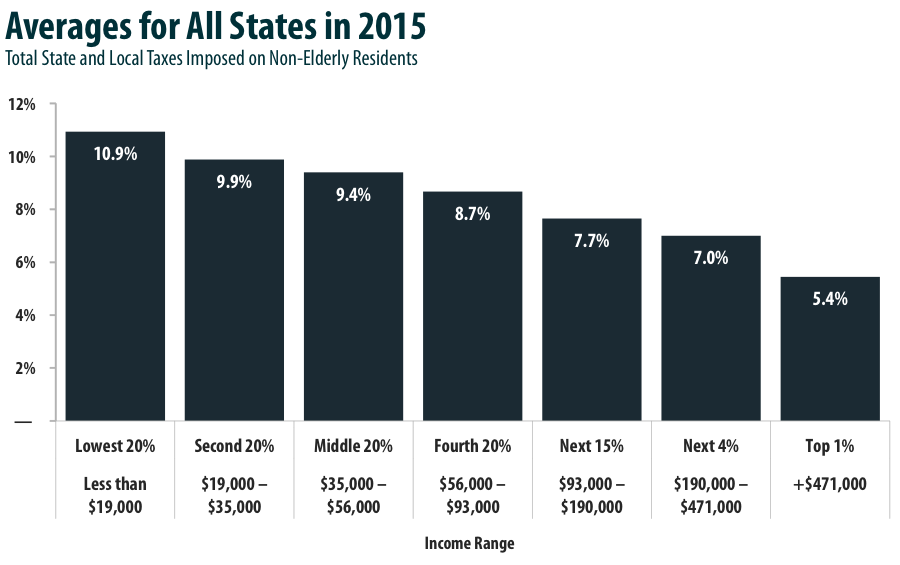 As you can see, the lowest income quintile, which includes households making less $19,000, pay almost 11 percent of this income in state and local taxes. This figure decreases steadily as income increases, with a particularly large drop at the very top of the income distribution. The top one percent of households pay 5.4 percent, half of the share paid by the bottom quintile.

This does not, of course, mean that most tax revenue comes from lower income households – 5.4 percent of $500,000 is far more than 11 percent of $20,000. Still, if we think about taxes in terms of proportional burdens, those with the lowest incomes give up more of what they have than those reporting higher income.

Not all state and local taxes, however, are regressive. This is clear in the second figure, pasted below. 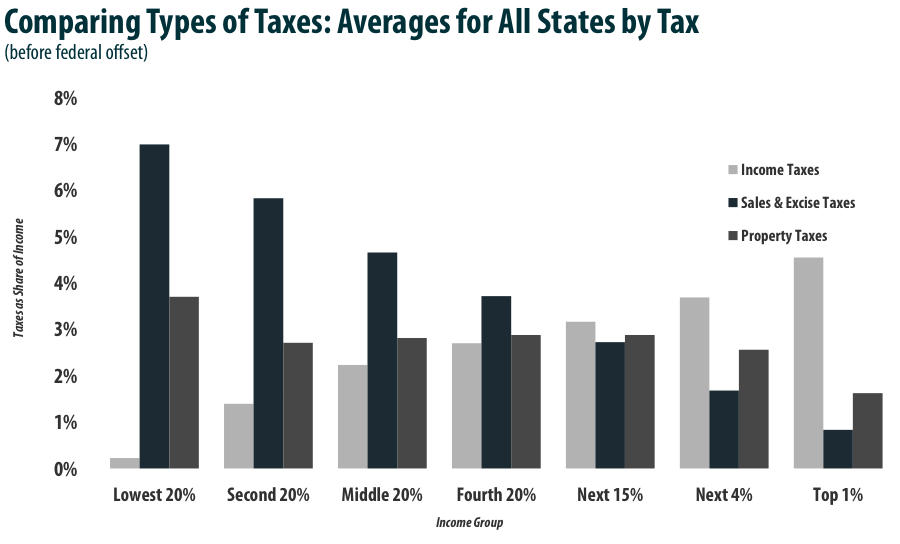 In any case, while federal taxes, on average, are highly progressive – the higher your income, the larger a share of it you pay in federal taxes - that progressivity is partially offset by state and local taxes. In other words, we are a lot closer to a “flat tax” than many people realize. And when it comes to services financed, in part or in full, by state and local tax revenue, lower income households bear a larger share of that burden than do their higher income counterparts.