A recent Brookings Institution forum on new social media and the re-invigoration of democracy got me thinking about whether and how Twitter and Facebook could successfully increase political participation, specifically voter turnout. Voter turnout is one of the most important indicators of a healthy democracy and – as many have noted – U.S. voter participation rates are remarkably low.

It does not surprise me that people don’t see the immediate gains of voting. Going to the polls on election day entails individual costs (e.g., time, figuring out polling locations), while the benefits are essentially collective and weakly dependent on the vote of any one individual. Thus, people may find that it’s in their interest not to bother (Downs 1957 is the classic work on this). This rational approach conflicts with a more normative (even moral) understanding of democracy and civic behavior – e.g., we know we should all vote; it’s as much our responsibility as our right.

In a much less academic vein, although many U.S. citizens are free-riders when it comes to voting, it appears that Americans love to give their detailed opinions on all kinds of things. For example, why are Americans, who are so enthusiastic and industrious when it comes to writing lengthy product reviews, indolent when they are asked (once every four years) to voice their political views? How can we make voting as compelling as writing an online review? And can social media help in this endeavor?

Being from Spain, one of the peripheral things that initially excited me about living in the United States was that I would be able to participate more easily in the online shopping experience, especially at Amazon.com (believe it or not, buying books online is much easier in the U.S. compared with other nations). As a social scientist and a foreigner, I don’t fully understand why so many Americans bother to write product reviews. Indeed, why do people publicly respond at all to the information (news, blog posts) they receive? I confess I have not studied this issue systematically, but my impression is that most people in Spain, though they vote at higher rates (see the graph below), would not bother writing an online opinion unless someone paid them. Even if they did bother to share their views on an item or an issue, they would never produce the type of careful and detailed examples that I’ve seen here; review writing in the U.S. is a serious enterprise. 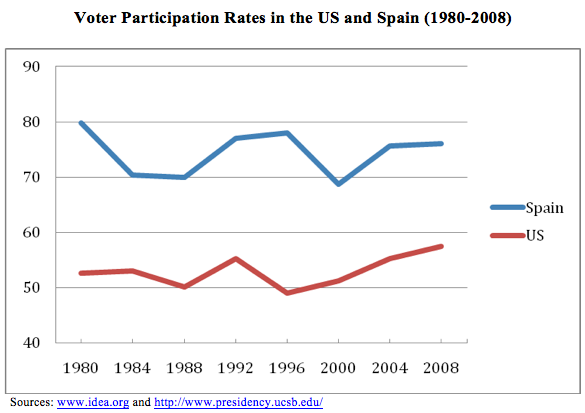 This is a total mystery to me. When a product already has hundreds, sometimes thousands of reviews, why would someone feel compelled to write yet another opinion? For example, with 5,926 reviews (and counting) Harry Potter and the Order of the Phoenix is one of the most reviewed items on Amazon (as of this writing, the last review was added on July 4, 2011). Also astounding is the culture around the reviewing community. People don’t just review items; they also review reviews and comment on comments. Amazon has a whole system of reviewer titles set up (e.g., “Top 1000 Reviewer”) and a page devoted to reviewer rankings.

It is amazing to me how American society responds when asked, even implicitly, to give an opinion. And it’s not just products - Americans react to news items, blog posts, tweets, you name it. My (somewhat cynical) gut feeling is that some of the people who produce these lengthy and carefully thought out evaluations do so because they are socially isolated and feel the need to be heard. Formalizing our views in writing before the world, so to speak, I suppose also feeds narcissistic tendencies, even if we are discussing something as ordinary as a vacuum cleaner.

Looking at it from a broader and more positive angle, I suspect that the need to say something about everything also signals that many Americans are highly engaged in their society, which is something I admire about this country. And, doesn’t a robust democracy require the public’s engagement with all that goes on around it? After all, many consumer reviews are about much more than just consumerism. Take book reviews, for example – our stated views on books tend to be about culture and about ideas. Some reviews and opinions reveal that the writers are highly educated, concerned citizens – not just people who have a fetish about smart shopping and bargains. Journalists, bloggers and columnists are no longer alone in their opinion making. Writers are writers and their readership; sometimes their eager audiences produce insights that are as valuable as those of the professional writer’s. Public writing and public thinking have become a fluid, interactive process.

Given this penchant for engagement, why is it that Americans’ political participation is low? Why don’t more Americans bother to vote? Some readers may find this comparison awkward because politics and shopping are indeed so different. But, as argued above, what’s happening online right now is not just shopping anymore.

Voting, like reviewing, commenting, or tweeting, is about offering a personal opinion via a ballot. But voting seems to somehow constrain self-expression in a way that new media do not. First, it does not allow elaboration; you can only choose from the options provided. Second, voting is unavoidably anonymous. Third, we receive no immediate feedback and our actions do not connect us to anything, unlike the rapid responses we often get when we tweet or post a comment. It’s like there is nothing and no one behind the process. It’s impersonal, detached and dispassionate… followed, at the very end, by election results, and – if we are lucky – months or years later, by a few barely discernable changes in policy. Voting just doesn’t seem to cut it. It just doesn’t seem to satisfy the impulses that drive our new, online expressions of community engagement.

I hear a lot of people talk about how social media are going to engage more people, especially young people, in the political process.  But, given how different the experiences are between voting and these newer forms of expression, I’m still waiting for someone to tell me how exactly we can draw on the strengths of the latter to affect the former. Voters may not want to answer yes/no questions and then go home, just as reviewers may not star-rate a book if they aren’t welcome to put their two cents on the record.