The Characteristics Of SIG Schools

A few years ago, the U.S. Department of Education (USED) launched the School Improvement Grant (SIG) program, which is designed to award grants to “persistently low-achieving schools” to carry out one of four different intervention models.

States vary in how SIG-eligible schools are selected, but USED guidelines require the use of three basic types of indicators: absolute performance level (e.g., proficiency rates); whether schools were “making progress” (e.g., rate changes); and, for high schools, graduation rates (specifically, whether the rate is under 60 percent). Two of these measures – absolute performance and graduation rates – tell you relatively little about the actual performance of schools, as they depend heavily on the characteristics (e.g., income) of students/families in the neighborhood served by a given school. It was therefore pretty much baked into the rules that the schools awarded SIGs have tended to exhibit certain characteristics, such as higher poverty rates.

Over 800 schools were awarded “Tier 1” or “Tier 2” grants for the 2010-11 school year (“SIG Cohort One”). Let’s take a quick look at a couple of key characteristics of these schools, using data from USED and the National Center for Education Statistics.

The table below compares SIG schools with all U.S. schools in terms of poverty, ethnicity, school type, and school location in 2009-10, the year prior to their receiving the grants. 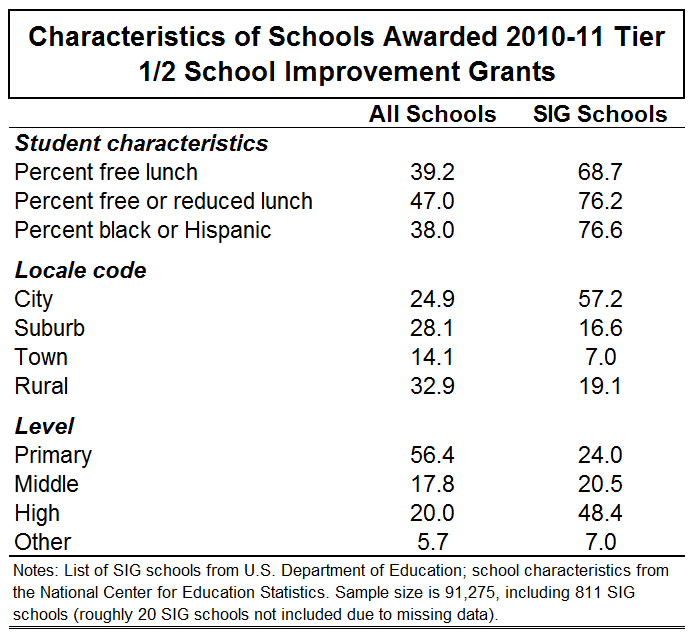 Clearly, Tier 1/2 SIG schools are different in terms of these characteristics. The free and free/reduced lunch (FRL) rates are almost twice as high as those for all schools, as is the percent of minority students. On a similar note, SIG schools are also overrepresented in cities, and about half of them are high schools, compared with around 20 percent nationwide.

Again, this is not surprising, and it is to no small extent due to how these schools were chosen. For example, poor students tend to score lower on tests, and so the schools that serve more such students, including those located in cities, have tended to be the ones identified to receive the grants. In other words, the SIG criteria do not really identify low-performing schools as much as schools serving low-performing students.

This is not necessarily a “bad” thing – after all, there is a good case for providing extra assistance to those students who are most in need of help, and that seems to have been the program's intent (even if the prescribed interventions are controversial and their efficacy is unproven). That said, parents, teachers, and other stakeholders should be aware that “persistently low-performing school” may be a somewhat misleading label.

The RI School for the Deaf, which serves students pre-k through high school, was labeled a Persistently Lowest Achieving school by the RI Dept. of ED., and subjected to the 4 draconian choices. This was done largely on the basis of scores on the state assessments, though the numbers in each cell were far too low to use statistically. (I think the RI Dept. of Ed. got a waiver from the USDOE to allow this.) When the school was told it could apply for a SIG grant, it was also told that it was competing with other districts for the grant money. (The RI School for the Deaf is considered a school district. Many of the students come from non-English speaking homes, many even from English speaking homes live in families that cannot fluently communicate with them in sign language, and many qualify for free and reduced lunch.) I retired from teaching there earlier than I had planned, in large part due to the stress and demoralization engendered by this process. Mass-administered standardized, multiple-choice tests are clearly not the valid way to assess learning in our population. The school was truly in need of improvement, but the time and resources devoted to do the bidding of the RI Dept. of Ed., fill out the paperwork, etc. would have been much better put to use by focusing on the actual needs of our diverse students, rather than the data dictates of RIDE.