Do Attitudes Toward Taxation Change When Economic Situations Change?: Evidence from Poland

In general, people tend to support expanding many of the programs funded by their taxes, but they don’t like paying taxes. In the U.S., for example, most people think the government should spend more on programs such as education, health care and urban renewal, but only a tiny fraction believes their own taxes, especially their federal taxes, are too low.

One of the possible explanations for these seemingly contradictory attitudes might be that people think tax systems should be more progressive – that is, they believe that tax revenue should increase, but that the increase should come from higher tax rates on higher earners. Poland is an interesting example in this context (if for no other reason than the fact that there were no taxes in Poland during the communist period). Today, when asked a generic question about whether the government should play a role in reducing income differences between the rich and the poor, Polish people tend to respond in the affirmative in larger proportions than their counterparts in virtually any other advanced nation. Yet responses to these types of questions can be quite different when they ask about specific issues, such as tax rates (Roberts et al. 1994).

Let’s take a quick look at some very tentative analyses that we (and our colleague Zbigniew Karpiński) have performed on this issue, with a specific focus on the question of whether people’s attitudes toward taxation change as their circumstances (e.g., income, employment) change.

Our data come from the Polish Panel Survey (POLPAN), a longitudinal survey of Polish individuals that is administered by the Institute of Philosophy and Sociology at the Polish Academy of Sciences. In this post, we’ll be looking at data from the 2003, 2008 and 2013 waves.

We might begin by describing Poles’ attitudes toward appropriate levels of taxation in 2013. The four graphs below come from questions asking respondents “how much tax should be paid” by (hypothetical) individuals at four different monthly income levels (the Polish currency is the złoty , or PLN; roughly three PLN is equivalent to one U.S. dollar). For easier visualization, responses have been sorted into percentage point categories. The bars represent the proportion of respondents giving answers falling into each category. 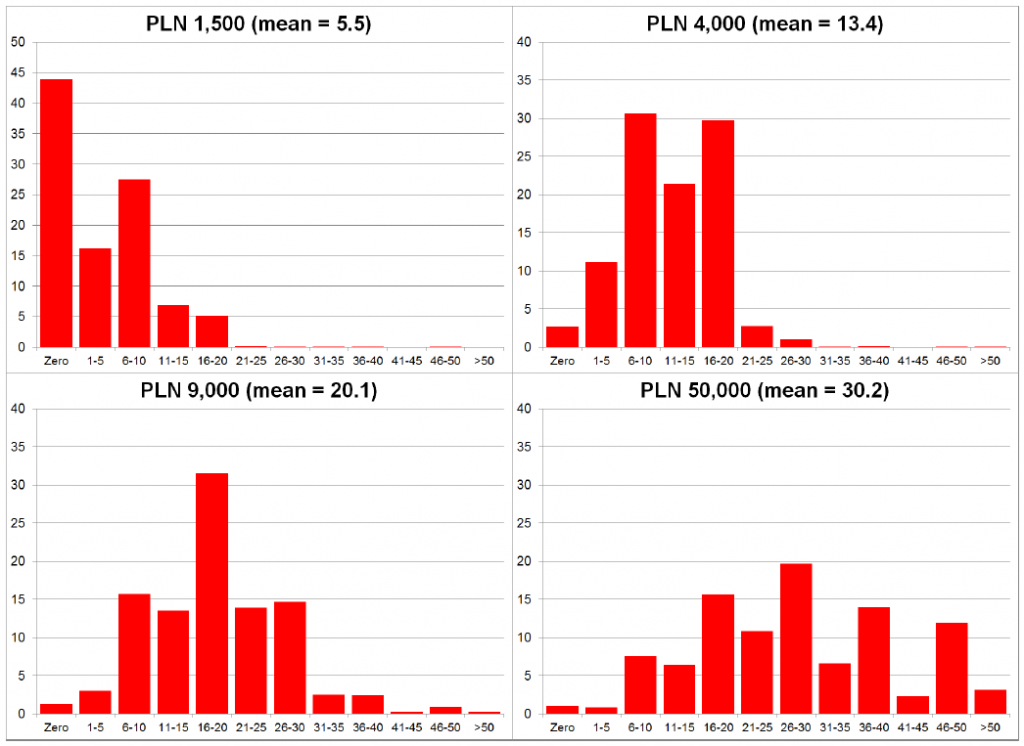 As you can see, when asked to name a preferred tax rate for low earners (PLN 1,500/month), the vast majority of respondents (over 80 percent) think the rate should be 10 percent or less, and a fairly large chunk of them (roughly 35 percent) believe that these low earners should not be taxed at all.

Glancing at the distribution of answers for each of the other three graphs (hypothetical earnings amounts), you see that respondents’ preferred tax rates increase as earnings increase. In short, then, Polish people, like their counterparts in most other nations, support progressive taxation.*

This support, however, while generally strong, not only varies substantially between respondents, it is also rather unstable over time in terms of extent – i.e., individuals’ preferred degree of progressivity fluctuates quite a bit between waves.

How might we explain this variation? If you survey the research in this area, you'll find that attitudes toward taxation (as well as those toward redistribution in general) are to no small extent driven by deeply held values regarding fairness, meritocracy and the causes of poverty (Fong 2001). There is, however, also plenty of evidence that self-interest plays an important role. That is, people do consider their own economic interests, (e.g., income, class position, etc.) when forming and evaluating their opinions about redistribution (Owens and Pedulla 2013).

In a recent exploratory analysis (presented here), we exploit the longitudinal POLPAN data, which asked a version of this question to respondents in 2003, 2008 and 2013, to see if we might make some sense of this volatility. We were specifically interested in the aforementioned issue of the role of self-interest.

One of the simpler ways we defined progressivity, and the one on which we will focus in this post, is the difference in respondents' preferred tax rate between the lowest and highest earners (PLN 1,500 and 50,000 in 2013) We used multilevel mixed models for panel data, which, put simply, allow us to examine how changes in respondents’ characteristics affect their tax preferences over time, while controlling for characteristics that do not change over time, including both ascribed observable traits (e.g., gender) as well as those that are more difficult to measure (e.g., time-invariant core values and beliefs). A simplified summary of the results (selected coefficients) from one of our models is presented in the figure below. 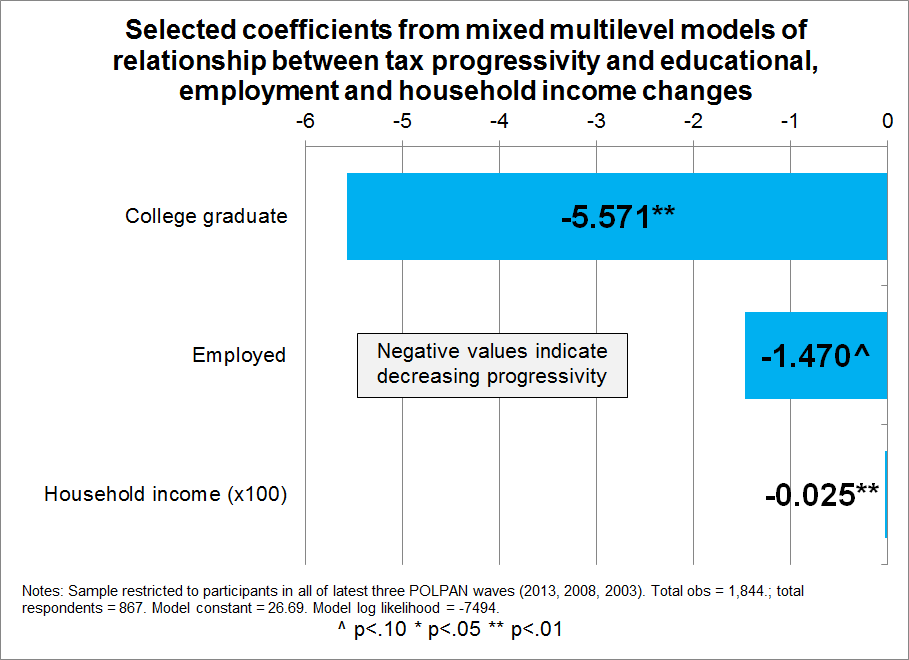 For instance, for every PLN 100 increase in income, there is a small decline (0.025 percentage points) in preferred degree of progressivity. The most straightforward way to interpret this is that people whose income increases are less inclined to support a tax structure that makes higher earners pay more. The same basic instrumental interpretation applies to the results for employment and education – an improvement in one’s situation (or, in the case of education, one's earning potential) is associated with less progressive taxation preferences.

To reiterate, these results, in addition to being tentative, do not imply that values and ideology are not important. They most certainly are. They do, however, suggest that individuals’ opinions about taxation seem to respond to shifts in economic well-being, at least in Poland over the past 15 years. As we refine this analysis, which will include examination of opinions toward other types of programs, we hope to contribute to the social scientific literature focused on welfare and redistributive preferences.