As Membership Has Declined, Have Attitudes Toward Unions Changed Too?

In any case, it’s worth taking a look at how attitudes towards labor have changed over the past few decades. In the graph below, I present simple trend data from the General Social Survey (GSS), which has been administered either annually or semi-annually since 1972. Every year, the GSS queries respondents’ confidence in a number of major societal institutions, including organized labor. Granted, there is a difference between having confidence in unions and supporting them per se, but I think it’s safe to assume that the former is a decent indicator of the latter. 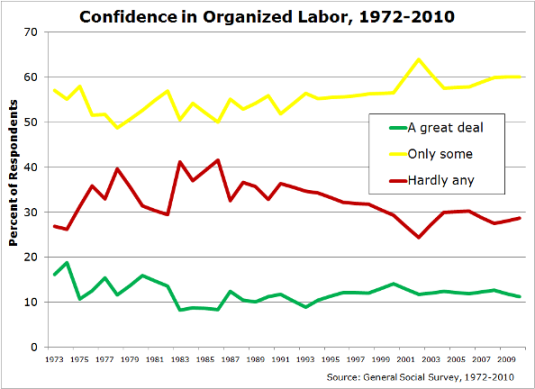 Since 1972, there have been some volatile periods, but the distribution of responses has nevertheless remained rather constant. In terms of confidence levels, about 60 percent of respondents express "only some," roughly 30 percent feel "hardly any," while a small minority (about one in ten) has "a great deal." Most of the volatility occurred prior to 1990, with attitudes remaining fairly consistent since then.

There’s any number of factors that might explain the steep decline in union membership over the past 30-40 years – the erosion of U.S. manufacturing, changes in state labor laws, the pressure of globalization, employers’ increased use of anti-union tactics, etc. The explanation for labor’s trouble is no doubt complex and multifaceted.

But, at least judging from the tabulation above, the decrease in union membership does not appear to have coincided with any substantial net change in public confidence in organized labor.