It is a staple of American politics that elected officials routinely frame their appeals to the "middle class." The idea is simple: Since the vast majority of Americans consider themselves members of the middle class, it makes sense to use this label as shorthand for "people like you." The practice of people locating themselves within a class structure – rather than being "assigned" to classes based on particular characteristics, such as income or occupation – is often called "subjective class identification."

Now, I don’t know whether the daily use of the "middle class" appeal is smart politics (I assume it has been poll-tested and focus-grouped ad nauseum). But I can say that the underlying assumption – that virtually all Americans identify subjectively as middle class – is not correct. Or, more accurately, it depends on how you ask the question.

If you give people a three-category class structure (upper, middle, lower) in which they must place themselves, a huge plurality opts for the middle. On the other hand, in the simple tabulation below, I demonstrate what happens when you add a fourth category to the menu of options – "working class." The data come from the General Social Survey (GSS) for 2010, and it’s a representative, unrestricted sample of all Americans over age 18. One of the survey questions is: "If you were asked to use one of four names for your social class, would you say you belong in: the lower class, the working class, the middle class, or the upper class?" 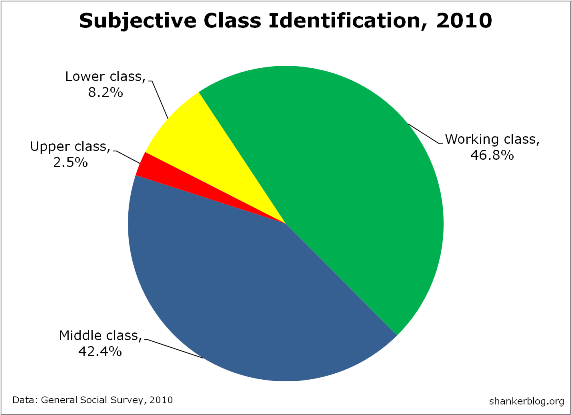 Not only is it incorrect to say that the vast majority of Americans identify as middle class, but middle class isn’t even the most common response. If you account for the error margin, the difference isn’t quite so large, but around 42 percent of Americans say they’re middle class, while almost 47 percent identify with the working class. By contrast, a relatively small slice (about eight percent) of Americans call themselves lower class, and very few (less than three percent) identify as upper class.

(Side note: If I limit the sample to respondents who are in the labor force, working class identification – predictably – increases to around 51 percent.)

Has the overall distribution changed significantly over time? Not much. The graph below presents the subjective class identification trend since 1972 (when the GSS started). 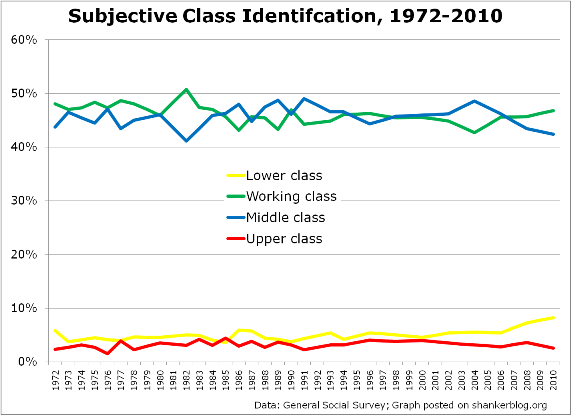 There is, as usual, a bit of volatility at points, but the trend is generally consistent – similar proportions of Americans identify with the four groups over time. It is, though, interesting to note that identifcation with the working and lower classes has increased a bit since 2007, which may be due in part to the recession (there was a similar uptick in working class identification during the recession of the late 1970s).

Needless to say, there is subgroup variation underlying these overall figures, both statically and over time. One in particular seems noteworthy. Having a college degree is often considered a "membership card to the middle class." Even among the college-educated, however, working class identification is still somewhat strong. I pooled the GSS data between 2006 and 2010 (to increase sample size, so as to get a better estimate), and limited the sample to respondents with a bachelor’s degree or higher. Working class identification for this group, while of course lower than for the whole sample, is still substantial – roughly 25 percent (while around 67 percent identify as middle class). At least as far as how people perceive their own class location, a college degree does not necessarily translate into middle class "membership" (as mentioned above, this figure is probably inflated slightly by the recession).

In general, I’m sure that the constant references to the U.S. middle class resonate politically. When the average person thinks about class structure, he or she may think in terms of the lower/middle/upper scheme, and therefore identify as middle class. It’s also possible that Americans who identify as working class may still aspire to middle class membership for themselves or their children.

Nevertheless, there seems to be a considerable bloc of Americans out there, many of them highly-educated, that still consider themselves working class. Public figures might consider speaking to them too.

Permalink
I also consider myself middle class, and decided to start blogging about my experiences, advice, and opinions on family, work, parenting, and daily life. Thought you'd enjoy: http://middleclasskeith.blogspot.com/
Submitted by Keith on August 7, 2011