A Miracle In The Mid-Atlantic

The National Assessment of Educational Progress, or NAEP, is often called “the nation’s report card." Advocates sometimes use the results of the main NAEP tests to argue for their policy agendas. One example (among many) is when supporters of the so-called “Florida Formula," a battery of market-based reforms that went into effect throughout the late 1990s and early 2000s and are currently spreading throughout the nation, make their case primarily on Florida’s NAEP performance. The basic logic is that average test scores increased during this time period, and thus whatever Florida did must have worked, and should be exported en masse to other states.

However, since 2003, the state that has brought home the most proverbial A’s on the nation’s report card is not Florida. It is Maryland. In fact, the increase in math and reading performance among fourth and eighth graders in the state’s public schools can only be called the “Maryland Miracle."

There's too much at stake for policy makers to waste time worrying about trivial details, such as policy analysis. Whatever laws and practices were in place in Maryland during this time period are clearly responsible for the Miracle. They should serve as a model for the nation.

But, first, let’s take a quick look at the most recent results. The four simple graphs below present the trend in average NAEP scores between 2003 and 2011, by grade/subject, for public school students in Maryland (blue lines) versus the U.S. overall (red lines). 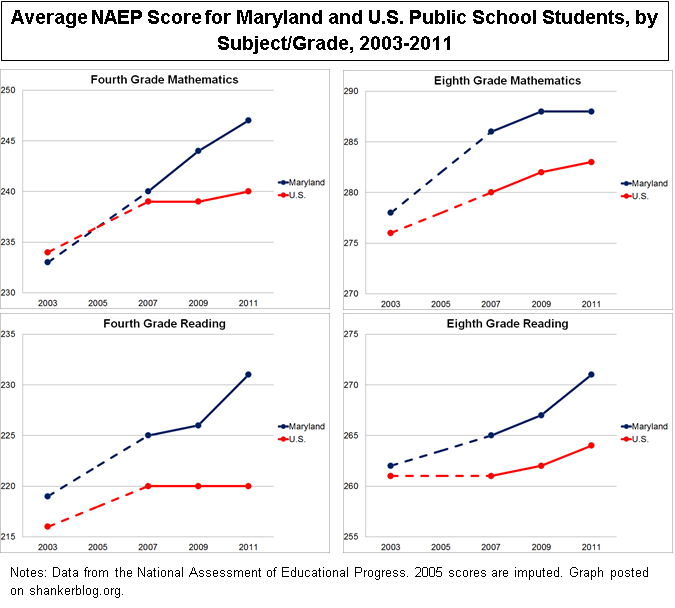 Between 2003 and 2011, average scores in Maryland increased between 10 and 14 scale score points in all four subject/grade combinations. To put this in perspective, a common shortcut for interpreting NAEP scores is to regard ten points as equivalent to one grade level. So, on all four exams, Maryland fourth and eighth graders in 2011 scored at least a whole school year ahead their 2003 predecessors.

This stunning increase was more than double of that of students nationwide (and double that of Florida’s students as well). Moreover, if we go back even further - to the early 1990s - Maryland's NAEP scores have risen more quickly than any other state's.

How did Maryland accomplish this Miracle? We might call it the “Maryland Formula." It includes:

According to NAEP, this particular configuration of policies has been a smashing success for Maryland.

It is time for other states to recognize these incredible results and begin (or continue) implementing the Maryland Formula. This includes: shrinking/unionizing charter sectors; spending more money; expanding the scope of teacher collective bargaining; and abandoning all attempts to design and implement new teacher evaluations or accountability systems, no matter how promising they might be.

The data hath spoken. All that remains is for us to listen.

Permalink
In ten years, after the current school reform fails…This might be the next fad: (Hat tip to: http://literacyinleafstrewn.blogspot.com/) To Remember Why We Teach • We should keep in mind that we do what we do in education for the learner, his needs, interests and aspirations, and not simply to cover the content. • We should encourage our students to learn because they are passionate aboutlearning, and less because they are afraid of failure. • We should teach to help our students achieve understanding of essential concepts and ideas, and not only to dispense information. • We should teach more to prepare our students for the test of life and less for a life of tests. To Reflect on What We Teach • We should focus more on teaching the whole child, in nurturing him holistically across different domains, and less on teaching our subjects per se. • We should teach our students the values, attitudes and mindsets that will serve him well in life, and not only how to score good grades in exams. • We should focus more on the process of learning, to build confidence and capacity in our students, and less on the product. • We should help the students to ask more searching questions, encourage curiosity and critical thinking, and not only to follow prescribed answers. To Reconsider How We Teach • We should encourage more active and engaged learning in our students, and depend less on drill and practice and rote learning. • We should do more guiding, facilitating and modelling, to motivate students to take ownership of their own learning, and do less telling and teacher talk. • We should recognise and cater better to our students’ differing interests, readiness and modes of learning, through various differentiated pedagogies, and do less of ‘one-size-fits-all’ instruction. • We should assess our students more qualitatively, through a wider variety of authentic means, over a period of time to help in their own learning and growth, and less quantitatively through one-off and summative examinations. • We should teach more to encourage a spirit of innovation and enterprise in our students, to nurture intellectual curiosity, passion, and courage to try new and untested routes, rather than to follow set formulae and standard answers. It calls on everyone of us to go back to the basics, to Remember Why We Teach - More… Less… For the Learner To Rush through the Syllabus To Excite Passion Out of Fear of Failure For Understanding To Dispense Information Only For the Test of Life For a Life of Tests Reflect on What We Teach - More… Less… The Whole Child The Subject Values-centric Grades-centric Process Product Searching Questions Textbook Answers Reconsider How We Teach - More… Less… Engaged Learning Drill and Practice Differentiated Teaching ‘One-size-fits-all’ Instruction Guiding, Facilitating, Modelling Telling Formative and Qualitative Assessing Summative and Quantitative Testing Spirit of innovation and enterprise Set Formulae, Standard Answers
Submitted by Rangoon78 on April 1, 2013
Permalink
If you look at Maryland's NAEP inclusion rates for students with disabilities and compare it to Florida's, that helps explain some of the miracle. Otherwise, well done to both states.
Submitted by FrankDeQuark on April 2, 2013
Permalink
Very funny MD- note however that a more serious analysis of NAEP scores did in fact find that Maryland edged out Florida for NAEP gains since the early 1990s (see Figure 4): http://educationnext.org/is-the-us-catching-up/ Now Maryland is one of the few states that has a six-figure average income for a family of four, and the state has a truly lamentable rate of exclusions for special education students in NAEP. Nevertheless we should indeed be doing the policy analysis necessary to examine the case.
Submitted by Matthew Ladner 2 on April 2, 2013
Permalink
Maryland is supposedly one of the top school system in the country. Can anyone tell me why they are changing their curriculum to the untested, unpiloted Common Core. Is it the $250 million bribe from the Fed. Gov. for Race To The Top funds. That can't be it. Our State School Board surely would not sell out our children for only $250 million which according to this yrs. budget would only operate our schools for 15 days. My county (Worcester County)is only getting $1.1 million over 4 yrs. and publishing the cost to implement RTTT is estimated to be $5.1 million. Not a good return on investment for an untested program.
Submitted by Fran Gebhart on April 2, 2013
Permalink
schoolfinance101 says that this is an April fools post "the genius of the post is in its subtlety." Care to comment? It's not clear whether school finance 101 believes there is any connection between the state policies you mentioned and improvement in achievement on NAEP. Also, if the graphs are accurate, how does the % of special ed exclusion in MD compare with the % of special ed exclusion nationally and in other states. Also, National Alliance of Charter Schools reports that Maryland charters enroll a higher % of African American Students than traditional public schools (80% - 35%), lower percent of Hispanic students (5% - 12%) and higher percent of Free/reduced lunch students (65% - 40%). Any comments about that? For what it's worth, our organization works with district &amp; chartered public schools. We encourage people to learn from the most successful schools, whether district or charter. Not sure if most, all or none of the April 1 posting is accurate (this is not an accusation, it's a question). Please clarify. Thanks
Submitted by Joe Nathan 2 on April 2, 2013
Permalink
As a Maryland educator this post made me proud. I think that the higher teacher salary has a lot to do with the rise in test scores. Teachers work when they are paid to work. I think other state should use this as a model. We also have the extra money to spend on resources around the school and this also helped build student achievement. But after reading this data I do not understand why Maryland is changing the curriculm to common core I feel like if we are improving why change things up? we should stick with what works.
Submitted by Whitney Elliott on April 10, 2013