Our guest author today is Dr. Alvin Larson, director of research and evaluation at Meriden Public Schools, a district that serves about 8,900 students in Meriden, CT. Dr. Larson holds a B.A. in Sociology, M. Ed., M.S. in Educational Research and a Ph.D. in Educational Psychology. The intervention described below was made possible with support from Meriden's community, leadership and education professionals.

For the most part, students' social-emotional concerns start small; if left untreated, though, they can become severe and difficult to manage. Inappropriate behaviors are not only harmful to the student who exhibits them; they can also serve to increase the social bruising of his/her peers and can be detrimental to the climate of the entire school. The problem is that many of these bruises are not directly observable – or not until they become scars. School psychologists and counselors are familiar with bruised students who act out overtly, but some research suggests that 4.3% of our students carry social-emotional scars of which counselors are unaware (Larson, AERA 2014). To develop a more preventative approach, foster pro-social attitudes and a positive school climate, we need to be able to identify and support the students with hidden bruises as well as intervene with pre-bullies early in their school careers.

Since 2011, Connecticut’s Local Education Agencies (LEAs) have been required to purchase or develop a student school climate survey. The rationale for this is that anti-social attitudes and a negative school climate are associated with lower academic achievement, current behavior problems, as well as future criminal behaviors (DeLisi et al 2013; Hawkins et al 2000) and suicide ideation (King et al 2001). There are hundreds of anonymous school climate surveys, but none of them was designed to provide the kind of information that we need to help individual students.

I vividly remember a discussion with a researcher from another LEA who had just administered an anonymous survey. On this survey, one student indicated that he intended to hurt himself. School officials were alerted but only knew the student's gender, race and school (all self reported). Administrators and school psychologists searched as best they could, but could not find nor help this student who was so evidently in need. Thinking about this incident, we decided that anonymity can come at too great a price. Thus, we decided to develop a statistically valid school climate survey of our own, but one that would also allow us to identify students who perceived themselves to be in social-emotional crisis and/or whose answers suggested they had inadequate coping skills. In other words, we decided to develop a tool that would produce timely, actionable information that school psychologists could use to help individual students in need.

The Meriden School Climate Survey for Students (MSCS_SV) is an online, confidential survey – it is not an anonymous survey.* Students in grades 3-12 are informed that the survey is confidential and that their responses will not be shared with anyone, unless someone could be harmed or is in danger – we must keep all students safe. The survey measures factors associated with school climate, such as caring, safety, respect and aggression, but it also includes "trigger emails" associated with three key survey items.

The first key survey item asks "How often are mean rumors spread about you?" The second asks "How often are you hit or threatened" in school? And, depending on the student’s response, the customized software may also ask "Would you like to tell us about it?" Because students who are hit or threatened, or have mean rumors spread about them are considered to be in harm’s way, a trigger email is automatically generated and sent to the building's school psychologist, social worker, administrators and the Office of Research and Evaluation (me). The trigger emails identify the student, his/her response to the survey item of interest, as well as his/her answer to the question "would you like to tell us about it?" – see some anonymous examples here. At the request of counselors, a third item was added to the trigger email protocol: "At my school, I have a friend who I can really trust." If the student responds he/she does not, a trigger email is sent to counselors.

We first piloted the instrument in June 2011. At that time, I was the only person receiving trigger emails. One student indicated that others were "always" mean to him. The software then asked if he wanted "to tell us about it." The student was experiencing such social-emotional stress that he wrote he was considering suicide. A trigger email was automatically sent to me; within 30 minutes of his response to that survey item, he was in a counselor's office. Whenever I hear of a student suicide or other violent act in the national or state news, I wonder if it could have been prevented had there been a similar confidential survey and intervention system in place in that particular school district.

During the 2012-2014 school years, a team of school psychologists and social workers developed an intervention protocol on how to respond to trigger emails. Since we know each student who completed our survey, we can track changes in these students’ perceptions of their schools’ climate over time. To estimate Meriden's social-emotional health intervention success, we followed the specific students who activated 115 triggering emails in the fall; all of these students were included in counselor caseloads. By the spring of that school year, 75% of them no longer felt harassed; the remaining 29 students remained in counseling groups.

The figure below displays the social-emotional profile for "Kara," a grade 8 student who has both "low" scores on key factors and "large" decreases on some factors over time. These factor-based scores provide counselors with a reliable measure of Kara's perceptions. Based on Kara's responses to the last four surveys, she feels teachers no longer care about her, other students are increasingly mean to her, and she has lost trusted friend(s) over the summer. According to practicing counselors, these historical social-emotional profiles have been "very helpful." 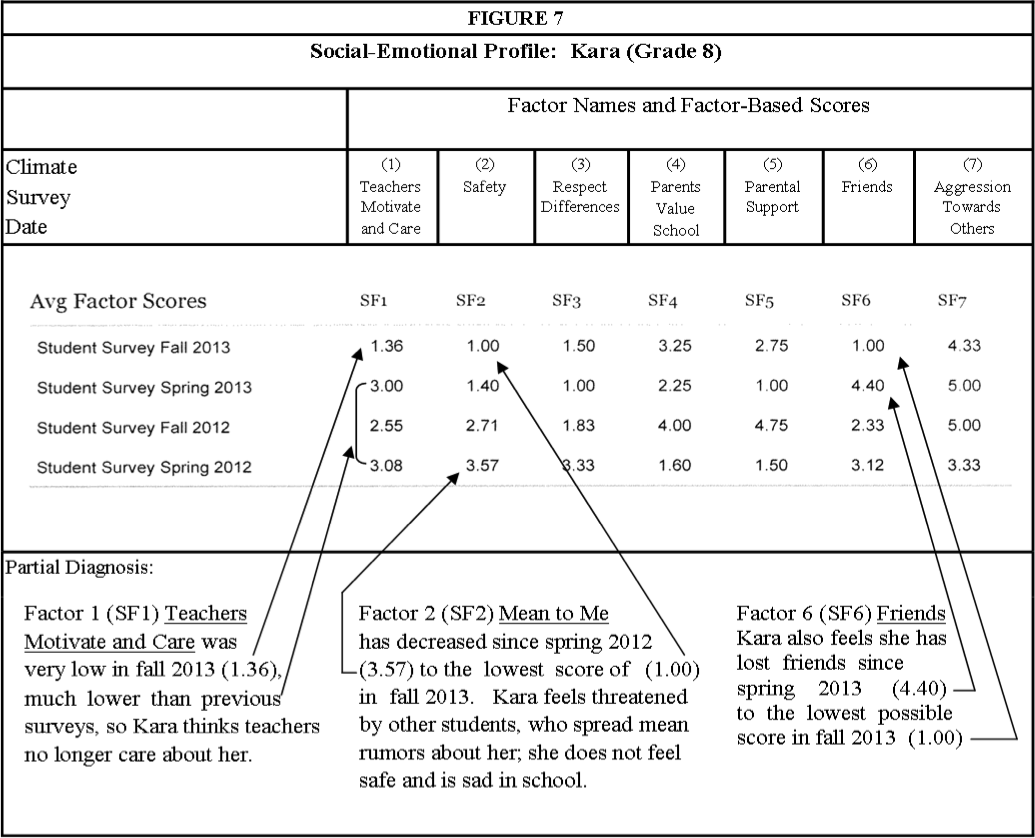 Through the MSCS-SV, students often name other students who are being mean to them. An administrator told me, half questioning, that one student was complaining that others were being mean to him, "when he was one of the biggest bullies of the school!" I explained that aggression (Factor 7) is one of the ineffective coping skills that children sometimes utilize in school social settings. Overly aggressive students may actually need counseling services and support – not necessarily or exclusively suspensions and expulsions – to learn to curb their inappropriate behaviors toward others. If successful, these interventions are likely to increase other students' perceptions of safety and a positive school climate, which overly punitive policies do not accomplish.

Traditional methods for reporting bullying rely on students to 'tell an adult', such as a teacher, administrator or parent but most students do not (Bauman 2010) and many suffer silently. These traditional methods do not always work; in fact, researchers have called for more developmentally sensitive methods to report bullying-like behavior (Bostic & Burnt 2011; Lyznicki, McCaffree & Robinowitz 2004). The MSCS-SV is a developmentally sensitive tool since students are more comfortable telling a computer than an adult (Pierce 2009; Faulkner 2005).

Since 2012, I have shared this work at national and state conferences, receiving positive audience responses and a lot of interest. This positive reaction, coupled with the understanding that we all need to help students in social-emotional need, recently led Meriden Public Schools to make this tool available for free** for use by other districts. One LEA that recently experienced a student suicide is preparing to implement a version of our survey and intervention system beginning next year.

In Meriden, our experience suggests that what we have put in place is an effective early warning system and intervention protocol that can help students develop and maintain pro-social attitudes and effective coping skills, thus minimizing the social-emotional bruising of additional students in our schools. We are eager to share this work and see it put to use to support not only our students but also students across the nation.

* The MSCS-SV was based on the National School Climate Standards (2009), piloted, revised and re-administered in the fall and the spring of each school year. The MSCS-SV has seven factors which were verified with confirmatory factor analysis by an independent university researcher with a comparative fit index (CFI) of >.90 (Gage et al 2014; and in press, Assessments for Effective Instruction, 2015). The seven factors with reliability coefficients can be viewed here and the complete survey here. A key finding in Gage and colleagues was that "respect for others" was a significant protective factor in preventing bullying behavior; as respect for others factor-based scores increase, bullying behaviors decrease.

** The MSCS_SV is only one component of Meriden's social-emotional health intervention system. In addition to a supportive administration, interested districts need a human support system. The MSCS_SV core functionality and standard survey questions are available at no charge to other LEAs.Technical support may be required for integration, branding and other tasks. This is a one time cost that should not exceed $2,500-$5,000 for a standard setup. Please contact Lori O'Brien at Web Solutions at (203) 235-7777 (Ext. 15) or l.obrien@websolutions.com for more information.