Hardly a week goes by during which an editorial or column in a major newspaper doesn’t comment on how public sector workers are making a killing compared with their private sector counterparts. Recently, as a result of the "edujobs bill," there has been even more of this chatter than usual about “overpaid” government workers with “bloated benefits” and “fireproof” positions. Some of these commentaries even purport to present “evidence."

Earlier this week, for instance, a piece in the Washington Examiner cited data showing that average compensation (salary plus benefits) for federal government workers was roughly twice that of private sector workers. Sound remarkable? Not so much.

This “argument” is akin to comparing the compensation of employees at IBM versus WalMart. You are talking about two very different groups of jobs.

Almost any en masse contrast of public and private sector workers – whether in terms of employment, wages, or benefits – represents an erroneous [choose your two fruits] comparison. The kinds of jobs that comprise the public sector are totally different from their private counterparts. To a very large extent, the discrepancies in pay, benefits, etc. are a function of this composition, not unions or some public worker conspiracy to grab tax money for a retirement home in Boca.

In the simple graph below, I use Occupational Employment Statistics data from the Bureau of Labor Statistics (May 2009) to break down the types of occupations in the private and public sectors (the latter includes federal, state, and local government employees). For the sake of simplicity, I combined occupational categories into five groups (based on the nested categories of the U.S. Standard Occupational Classification). 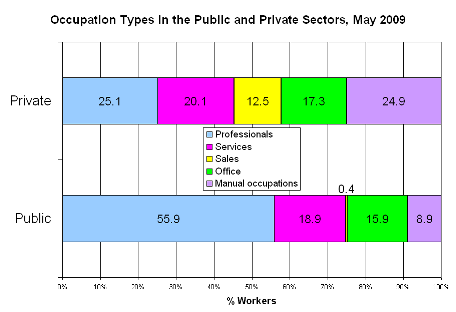 As a proportion, there are twice as many professionals (this includes managers) in public sector positions (55.9 versus 25.1 percent), while conversely, almost four times as many private sector workers occupy (typically lower-wage) sales and manual jobs (37.4 versus 9.3 percent). Almost three-quarters of government employees are professionals or office workers, compared with about 40 percent of the private sector.

These compositional differences are a simple function of the types of workers that governments need (e.g., teachers, engineers, administrators), but their implication is that any public/private comparison of compensation or other conditions probably masks more than it reveals.

For instance, professionals in both sectors are almost always higher-paid, get better benefits, and enjoy greater job security than workers in other types of jobs. So, arguments that public sector workers are overcompensated because their wages and benefits are higher than private sector workers’ ignores the simple fact that a great deal of this discrepancy is explained by occupation, not sector. Similarly, less severe job losses in the public sector are in no small part due to the fact that higher-skill workers with more education and training are often less “vulnerable” to layoffs than other workers (public sector job losses also tend to lag behind the private sector during recessions).

So, the next time you see data used to emphasize fat benefits or insane-sounding salaries in the public sector, remember that the two sectors are comprised of very different jobs, and those who compare them haphazardly are often, knowingly or not, misrepresenting data to make an ideological argument. And, if anyone is overpaid, it’s probably they.