On March 3, the New York Times published one of their “Room for Debate” features, in which panelists were asked "How To Ensure and Improve Teacher Quality?" When I read through the various perspectives, my first reaction was: "Is that it?"

It's not that I don't think there is value in many of the ideas presented -- I actually do. The problem is that there are important aspects of teacher quality that continue to be ignored in policy discussions, despite compelling evidence suggesting that they matter in the quality equation. In other words, I wasn’t disappointed with what was said but, rather, what wasn’t. Let’s take a look at the panelists’ responses after making a couple of observations on the actual question and issue at hand.

The first thing that jumped out at me is that teacher quality is presented in a somewhat decontextualized manner. Teachers don't work in a vacuum; quality is produced in specific settings. Placing the quality question in context can help to broaden the conversation to include: 1) the role of the organization in shaping educator learning and effectiveness; and 2) the shining of light on the intersection between teachers and schools and the vital issue of employee-organization "fit."

Second, the manner in which teacher quality is typically framed -- including in the Times question -- suggests that effectiveness is a (fixed) individual attribute (i.e., human capital) that teachers carry with them across contexts (i.e., it's portable). In reality, however, it is context-dependent and can be (and is indeed) developed among individuals -- as a result of their networks, their professional interactions, and their shared norms and trust (i.e., social capital). In sum, it's not just what teachers know but who they know and where they work -- as well as the interaction of these three.

So, a broader, more useful question for this Times panel might have been: How do we maintain and systematically develop our schools' and district's overall teaching capacity?

Now, let's turn to the answers given by the five panelists.

I am not going to weigh in on the merits and shortcomings of each recommendation. My primary point, rather, is about the relative inattention to policies and suggestions that would harness the power of the interpersonal level.

To illustrate this point, I'd like to borrow Tony Bryk and Barbara Schneider's framework, which they laid out in one of my favorite books, Trust In Schools. The authors argue that education reforms tend to fall in two categories: Those that take a structuralist approach (e.g., governance reform, human resource policies, schools' working conditions); and those that take an instructional approach (e.g., standards, curriculum, teacher development). As the researchers argue and convincingly (i.e., empirically) demonstrate in their work, there is a third important approach to educational improvement: the relational approach, which focuses on the level at which interpersonal interaction occurs, where norms emerge, and at which reforms are implemented.

I went ahead and classified the recommendations of the five NYT panelists across two dimensions. On the vertical axis (the rows of the table below) are Bryk and Schneider’s categories (structuralist, instructional, and relational); the horizontal axis (the table’s columns) contain two dimensions representing whether the policy seeks change by primarily targeting the individual or the group/organization. 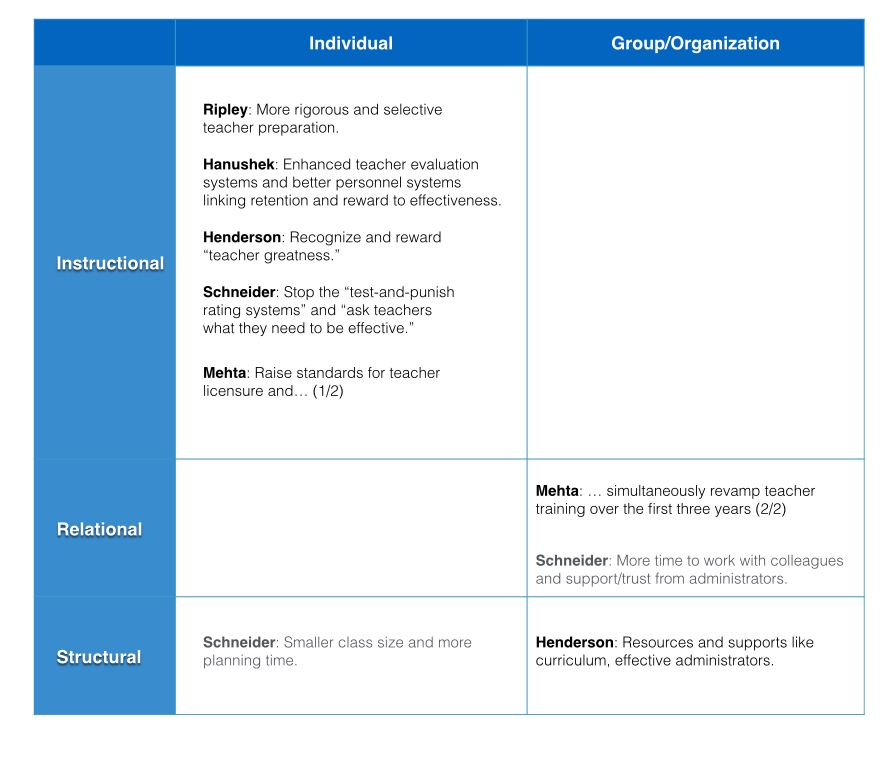 Some of the recommendations are difficult to classify in terms of which approach they represented most closely. Perhaps this is because the panelists did not go into enough detail. In any case, what this exercise makes clear is that most of the policy action seems to employ the "instructional approach" while much less is happening in the way of policies targeting the relational level. Only Mehta and Schneider touch upon the latter. Mehta recommends that "master teachers [should] mentor new ones," as a sub-strategy within his broader two fold recommendation (i.e. tightening licensure while revamping new teacher training). As for Schneider, one of her two primary suggestions is to ask teachers about their needs, a question to which she would reply: "time to talk to [her] colleagues and discuss what works in the classroom," as well as "trust and support from administrators." I marked these in light grey because they are mentioned not so much as policies she recommends but as examples that would work for her specifically.

This insufficient attention -- not just by the panelists mentioned earlier, but in general -- to the relational dimension (or social side) is not consistent with what we know from research: That context, particularly the social context, plays an important role in teaching effectiveness - see here for a review and here, here, here, here and here for additional key papers not covered by the review. Not only is peer learning an important mechanism for teacher development but there is also compelling evidence showing that it is associated with student gains (see here for a review -- and also here, here and here) and that, indeed, students learn the most when their teachers have high human capital and work in schools with strong collaborative relationships (i.e., strong social capital). As Carrie Leana and Frits Pil noted in a previous post:

Organizational success rarely stems from the latest technology or a few exemplary individuals. Rather, it is derived from: systematic practices aimed at enhancing trust among employees; information sharing and openness about both problems and opportunities for improvement; and a collective sense of purpose.

Now, you might say that addressing (let alone improving) the above-mentioned aspects is extraordinarily difficult to do via macro policy -- I would have to agree. However: 1) it's not impossible (see here for some ideas); 2) some of it is not rocket science (e.g., be more intentional in teacher recruitment, recognize and reward cooperative behavior); and 3) it's not only about new policies but also about tweaking existing ones to leverage (instead of undermine) the social side of change. As Bryk and Schneider argued, "from a policy perspective we constantly need to ask whether any new initiative is likely to promote relational trust within school communities or undermine it." In other words, we should think about potential social impact as a key consideration guiding policy design.

If you are interested in a broader conversation on the issue of teacher quality check out our recent discussion with Susan Moore Johnson, Carrie R. Leana and John P. Papay, led by Andy Hargreaves and Pasi Sahlberg.