The Pew Center on the States just released an updated report on unfunded liabilities of state pension (and retiree health) systems. The figures are sobering. In FY 2009, state pension plans were funded at an average of 79 percent, meaning that they were short about one dollar for every five that projections suggest they’ll need to meet their obligations.

While there’s no doubt about the troublesome implications of these findings, there’s a lot of disagreement as to causes. Lately, governors and state legislators (of both parties, but mostly Republicans), as well as dozens of commentators, have tried to lay the blame on the public sector workers, to whom the pensions are owed – seeking to restrict these workers’ collective bargaining rights, with the claim that this will help control the cost of benefits.

The unfairness of blaming public sector workers – and their unions – should be pretty clear. By all accounts (also here), the primary reason that pension plans are in trouble is that the 2008 collapse of financial markets decimated the value of pension fund investments (the early 2000’s recession also seems to have played a role). Add to that an aging population (there is an increasing percentage of retirees as a share of the population, and they are living longer), as well as the failure of many states to make their required contributions during good times, and you have a fairly comprehensive explanation for the pension "crisis."

Nevertheless, some have argued that public employee collective bargaining has exacerbated states’ pension problems – after all, more than their non-union counterparts, union members have tended to trade current salaries in favor of increases in deferred benefits. In that case, we might expect that states with higher densities in public sector union membership will have larger unfunded pension obligations. These differences need not be huge, but it’s reasonable to anticipate that they would be discernible. Let’s take a look.

I conducted a similar simple analysis for a previous post on state budget gaps, and am using most of the same data sources and methods as before. As a measure of union density, I use the percent of each state’s public workers who are covered by a contract with a union or similar employee organization. The data and documentation are available here (see the previous post for a brief discussion). My measure of pension “health," taken from the Pew report, is the degree (percentage) to which a state’s future pension liabilities are fully funded as of FY 2009 (2010 figures are only available for a small set of states). For more details on the data and methods, see the figure’s stub.

The scatterplot below presents the relationship between state’s pension funding and their union densities. 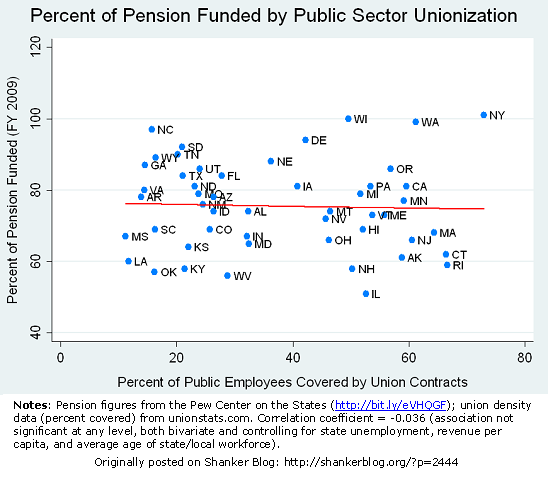 The plot suggests that there is not much of a relationship between public union density and pension funding. The correlation between these two variables is miniscule (-0.036) and the association is not statistically significant at any conventional level. Many high-density states, such as New York and Washington, have pretty good pension outlooks, relatively speaking (at least as of FY 2009), while others are in trouble. The same goes for the low-density states – some, such as North Carolina, are well-funded, while others, such as Oklahoma, are seriously underfunded.

(Note: These results persist even if I remove different sets of states from the analysis, such as the fully funded states, or the top and bottom 3-5 states in terms of union density. In addition, the relationship remains small and statistically insignificant when I control for state unemployment, revenue per capita, median income and average age of public sector workers.)

Needless to say, this is a very simple analysis and it’s far from conclusive. State pension plans – and the reasons why they are funded or unfunded – are highly complex, and the bivariate relationship presented above does not preclude the possibility that unions had a substantial, unobserved effect on pension costs (and unionized states may have diverted funds to make up the difference). In addition, my quick analysis obviously does not address the possibility that public employee pensions in general, both union and non-union, are “too high” (though comparisons of total compensation for public- and private-sector workers suggest otherwise; see here and here).

Still, as was the case with state budget gaps, I find little evidence that the unionization of public employees has any effect – whether positive or negative – on the fiscal soundness of state pension plans. This, along with the fact that we already know why pensions are in trouble, and it has little to do with unions, once again represents strong tentative evidence that the push to eliminate collective bargaining is misguided, and the blame on unions is misplaced. States with little or no union presence are, on average, in no better shape.

As a nation, all of our financial plans for taking care of the elderly need to be examined (consider Social Security and Medicare). There are several options for addressing these issues, and we should debate them. But the first step would be to stop pointing fingers at public employee unions and their members. They are victims too.

Before the stock crash, Pew was reporting that state pensions were $731 billion short. Now the figure is $1.26 trillion. So at most you can blame the stock market crash for about $500 billion of the deficit.

FYI, I suspect that whether or not a state's employees participate in Social Security is more determinative of whether the pension is underfunded (no participation in SS = pressure to ratchet up benefits).