What Do Teachers Really Think About Education Reform?

There has recently been a lot of talk about teachers’ views on education policy. Many teachers have been quite vocal in their opposition to certain policies (also here) and many more have expressed their views democratically – through their unions – especially in states where teachers have collective bargaining rights.

We should listen carefully to these views, but it’s also important to bear in mind that there are millions of public school teachers out there, with a wide variety of opinions on any particular education policy, and not all of their voices might be getting through.

So, the question remains: How do most teachers feel about the current wave of education policy reforms spreading throughout states and districts, including (but not at all limited to) merit pay, eliminating tenure and incorporating test-based measures into teacher evaluations?

The logical mechanism by which we might learn more about teachers’ views on these policies is, of course, a survey. Unfortunately, useful national surveys are quite rare. In order to get accurate estimates, you need an unusually large number of teachers to take the survey (a deliberate "oversample"), and they must be randomly polled (lest there be selection bias). In my last post, I suggested that states/districts conduct their own teacher surveys.  In the meantime, some national evidence is already available, and if the data make one thing clear, it’s that we need more. When it comes to supporting or opposing different policies, teachers’ opinions, like everyone’s, depend a great deal on the details.

Take merit pay, for example. A survey of teachers from 2009, conducted by Public Agenda, asked whether teachers thought that “tying teacher rewards to student performance” would improve teacher effectiveness. 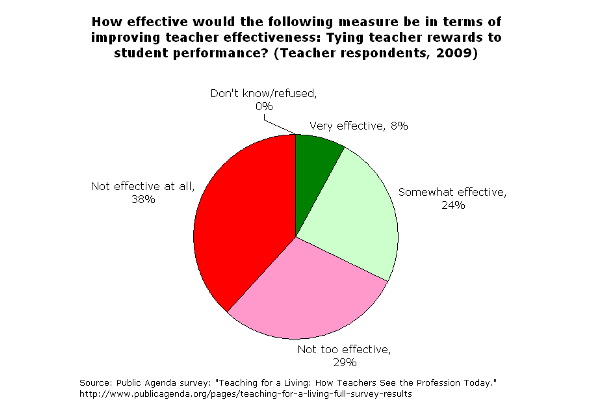 But what does “student performance” mean? What kind of “rewards” are we talking about? If by “student performance” you mean state test score growth, and by “rewards” you mean salary, then teachers react quite differently. As a different survey (also from 2009, sponsored by Education Next and the Harvard Program on Education Policy and Governance, and reported in this paper, which is worth reading) shows, when teachers are given a concrete proposal – such as tying salary to student test scores – their reaction is overwhelmingly negative. The figure below presents the simple distribution of responses. 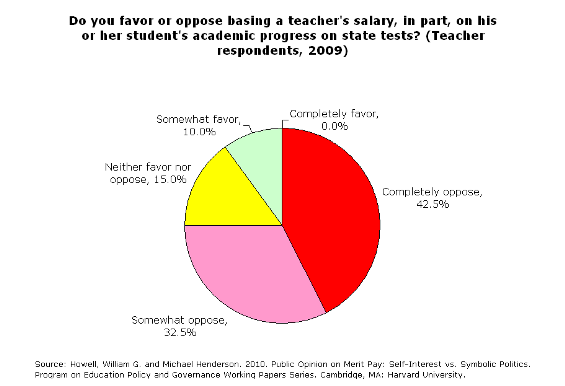 Three in four teachers either “completely” or “somewhat” opposes basing salary, in part, on student testing growth, while only one in ten supports it, none “completely” (but note that this question, unlike the one above, provides respondents with the opportunity to say they ‘neither favor nor oppose,’ which may influence the results somewhat).

So, while teachers are not particularly friendly towards the generic idea of being “rewarded” based on “student performance," there appears to be a great deal of variation depending on the details (which might also include specifying what constitutes “in part”). In particular, the specific mention of standardized tests seems to depress teacher support, at least in this instance.

The same general principle – that attitudes vary according to the details – applies to another key “area” of our education debate: the need to dismiss “ineffective teachers." The figure below presents a distribution of responses to two questions, both from the aforementioned Public Agenda poll. 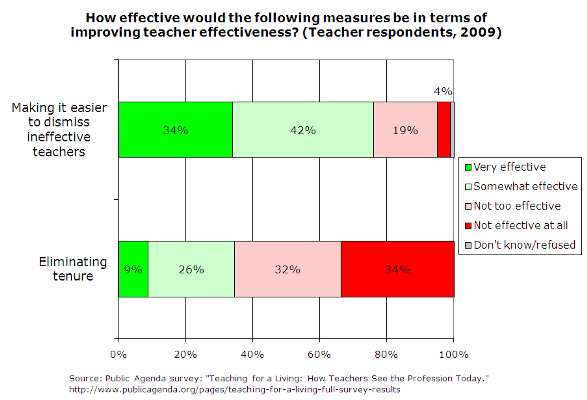 The idea of making it easier to dismiss “ineffective teachers” gets an overwhelmingly positive response – three in four teachers think it would be effective in improving the teaching force, while virtually none thinks that it wouldn’t be.

But this doesn’t really tell us much. Who would possibly disagree that “making it easier to dismiss ineffective teachers” would improve overall teacher effectiveness? That is – by definition – what would happen. It's how you do it that matters.

Accordingly, when you propose an actual concrete policy intervention – such as eliminating tenure – responses change rather dramatically. As is evident from the second question presented in the figure above, teachers do not believe that streamlining dismissals and eliminating tenure are synonymous policy choices. Although one in three teachers thinks that “eliminating tenure” completely would be at least “somewhat effective” in improving teacher effectiveness (only 9 percent thinks it would be “very effective”), two in three feel it would be either “not too effective” or “not effective at all." So, it remains to be seen what particular processes most teachers think would accomplish this goal (which includes the prior - and equally important - question of how to define "ineffective").

Teachers’ policy views might also differ depending on the group of teachers to which the policies pertain. For instance, the EdNext/PEPG survey finds that teachers, while largely dead-set against tying pay to student test scores, are a bit more amenable to using testing data as one measure determining whether probationary teachers are awarded tenure. 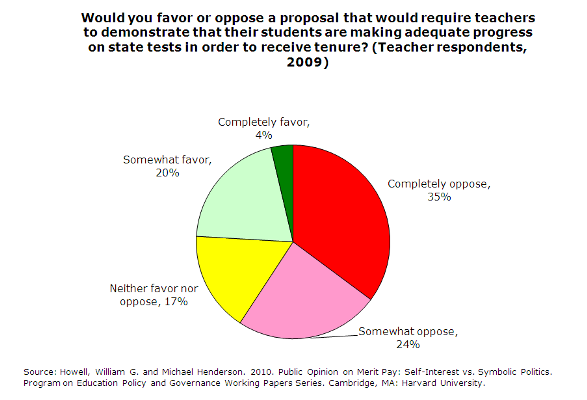 Although almost 60 percent of teachers are either “somewhat” or “completely” opposed, there is a larger support level (about 25 percent) than there is for using tests to partially determine salary.

Again, as soon as you inject actual policy details into the question – specific measures, such as eliminating tenure, merit pay or basing tenure on test scores – teachers’ responses can change substantially. There is also almost certainly variation in views by location, teacher characteristics, etc.

We need more of these data – surveys of teachers that query attitudes towards specific policy proposals. There are some excellent and useful teacher surveys out there (including others I didn’t cite, such as the Gates/MetLife survey), and they choose their questions carefully to address a variety of important issues. As a result of this more general focus, their policy-related questions sometimes lack the nuance required to truly assess teachers’ preferences (at least on many of the most commonly-discussed and/or controversial policies). As just one example, I would like to know teachers’ views on what percent of their evaluations should be comprised of different measures, including growth model estimates.

In general, it is difficult to understand why we are in the middle of making large changes to our education system – a process that has been happening for several years now – but still have relatively little idea what teachers really think about most of these reforms. Needless to say, the fact that teachers support or oppose a given policy does not necessarily mean that it should or shouldn’t be pursued, but I personally would take their opinions seriously, and we should find out what they think.