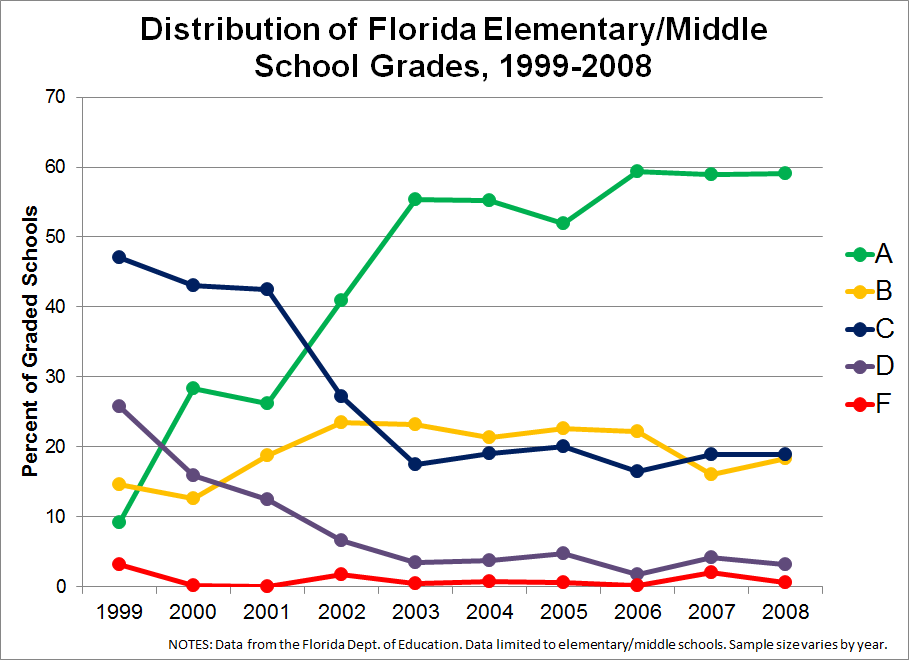 Matt, thanks for your expose. The same has happened in Louisiana: change the rules, and "improve" the scores. My colleague Herb Bassett and I just did an interview for Louisiana Public Broadcasting in the school score inflation in 2012 in Louisiana:

This ploy of moving the target has a long and dishonorable tradition. Back during Nixon's reign, the threshhold for petty theft was changed by the FBI's Uniform Crime Statistics operation, and the resulting drop in crimes counted was called a drop in crime.

Great article thanks for exposing the truth about these "reforms"

Motorola employees used to say, regarding the Six Sigma system before the company fell apart, "be careful what you measure" and "the metrics become the goal." These warnings apply to educational accountabiity systems too. Accountability systems, under the guise of presenting a true representation of data, can be extremely misleading when used inappropriately. Unfortunately, the public generally doesn't understand the misuse of these systems.

Matt, I didn’even realize that Mercedes Schneider had already commented. She and Herb did a great job of pointing out the scam in Louisiana. They can also tell you that La is following FL and I suspect other states, in destroying the ability of researchers to utilize databases in order to check claims of the reformers. All historical databases were dropped from the new website in LS… now it is all propaganda. Thanks for the details on Fla!~

You can go back pretty far with the FL data at this website; email me if you want more help with this.

Yes, I use those datasets often (probably too often!).

What I was looking for was school-level data that would enable me to backcode data from a given year into a previous grading system. For example, to roughly simulate the 1999 system, I would need level 1 rates by subgroup. The data are available, but only if you download them for each school individually.

an interested reader of your posts, and curious if we are related, please email me, thanks.