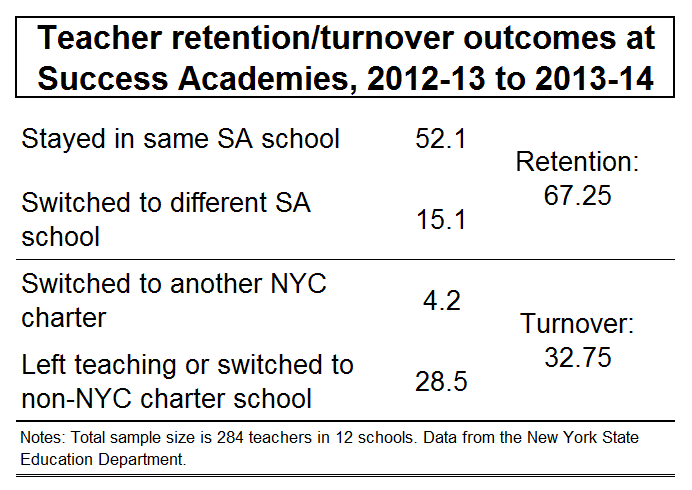 Matt, the table doesn't have a category for teachers who left SA and went to a district school, NYC or otherwise. Any data on that?

Unfortunately, we cannot make that determination, even within NYC, as the unique teacher IDs are different between sectors.

Interesting - thanks for letting us know. BTW, excellent post.

Is it possible that SA's numbers are taking into account SA teachers that were promoted into school or network administration positions, which might be dramatic given SA's expansion? Perhaps those numbers are being counted in your numbers as "leaving the teaching profession" and in SA's account of staying in the network, even though these individuals are coaches/principals/deans/etc rather than teachers.

There are many teachers that are not really "fired", but choose to leave and to uphold image SA they say "fired". The teacher was already planning to leave and was then "asked" to leave. Successful teachers tend to leave, once they are certified to work elsewhere. Those that no longer want to teach stay in the network, to move to a different positions, and then leave.