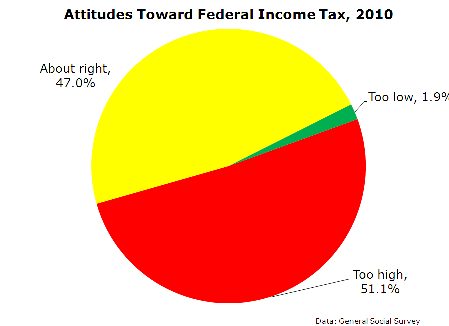 Permalink
I can believe your final conclusion, but I don't think you provided enough evidence for it. What do Americans think about our government spending on the wars in Iraq and Afghanistan? The expansion of our drone program? Foreign aid? Bank bailouts? Until we know the opinions on those subjects, we can't say for sure that Americans want the government to spend more. We just know they want the government to spend more on the areas you have noted. I expect that Americans want a reduction of government spending in some if not all of those areas. And, of course, this debate, as framed by the conservatives, sidesteps the more important question (and does so intentionally, I imagine): What are the social, economic, and political consequences of cutting funding from infrastructure, education, the social safety net, and other essential platforms upon which our society and economy are built?
Submitted by Daniel Burke on November 9, 2011
Permalink
After reading your post I did some research. Seems that when you look at the trends, the data paint a different picture. http://brainoids.wordpress.com/2011/02/24/sneak-peek-of-the-2010-general-social-survey/ "-Solid and sustained support for Education spending (always perplexing given how little influence the Federal government has here) -Significant downturn in net support for both Health and the Environment. In both cases, it is hard to see the changes (especially when viewed historically) as anything other than major backlash against recent public policy initiatives in these areas. -Recent decreases in support for spending on Urban Issues, Social Security, Racial Inequality, and Welfare, as well as International Aid. As fiscal austerity looms, social spending does not seem well favored. -A somewhat surprising uptick in support for Defense spending – surprising in that the most recent defense downturn has only just started, and not yet cut very deeply." Come on Man....
Submitted by Dave Wheeler on November 9, 2011
Permalink
Dave, Obviously an important point. I looked at the trend in the education variable here: http://shankerblog.org/?p=1456 (also see this post: http://shankerblog.org/?p=2127). My plan was to address the trends in the other attitudes in a future post, but I guess I don't have to. Note, however, that some of the long-term changes are rather small, and it's hard to tell whether the short-term declines in others will persist (though I suspect this will be the case with healthcare). In addition, the focus of this post was more about how many people want to spend less (i.e., "cut"), rather than support per se. Yes, these data are cross-sectional, but the proportion of Americans who want to spend less remains quite low. Thanks for the comment, MD
Submitted by mdicarlo on November 9, 2011
Permalink
Appreciate the reply. To often the "real world" depicted in the media clashes dramatically with the reality of the neighborhood. The declining trends can reflect a simple fact. Folks are tired of paying for government programs that are motivated more by their political popularity rather than their efficiency and effectiveness in meeting the needs of the those they should be serving. Thanks again!
Submitted by Dave Wheeler on November 10, 2011