Are Teachers Changing Their Minds About Education Reform?

In a recent Washington Post article called “Teachers leaning in favor of reforms," veteran reporter Jay Mathews puts forth an argument that one hears rather frequently – that teachers are “changing their minds," in a favorable direction, about the current wave of education reform. Among other things, Mr. Mathews cites two teacher surveys. One of them, which we discussed here, is a single-year survey that doesn't actually look at trends, and therefore cannot tell us much about shifts in teachers’ attitudes over time (it was also a voluntary online survey).

His second source, on the other hand, is in fact a useful means of (cautiously) assessing such trends (though the article doesn't actually look at them). That is the Education Sector survey of a nationally-representative sample of U.S. teachers, which they conducted in 2003, 2007 and, most recently, in 2011.

This is a valuable resource. Like other teacher surveys, it shows that educators’ attitudes toward education policy are diverse. Opinions vary by teacher characteristics, context and, of course, by the policy being queried. Moreover, views among teachers can (and do) change over time, though, when looking at cross-sectional surveys, one must always keep in mind that observed changes (or lack thereof) might be due in part to shifts in the characteristics of the teacher workforce. There's an important distinction between changing minds and changing workers (which Jay Mathews, to his great credit, discusses in this article).*

That said, when it comes to the many of the more controversial reforms happening in the U.S., those about which teachers might be "changing their minds," the results of this particular survey suggest, if anything, that teachers’ attitudes are actually quite stable.

For example, respondents were asked, in 2003, 2007 and 2011, whether they would “favor or oppose giving financial incentives to teachers whose kids routinely score higher than similar students on standardized tests." Here are the distributions of responses (remember that all of these figures have margins of error, so small changes – say, a few percentage points in either direction - are best ignored):

First, while most teachers oppose test-based incentives, around one in three either “somewhat favor” or “strongly favor” the idea. This is a bit higher than the support levels one finds in other recent surveys that ask about performance pay and mention test scores explicitly (see here). One can only speculate as to the cause of this discrepancy.

Nevertheless, the more relevant point for our purposes is that these responses do not vary much between the three years in which the survey was conducted (which, just to reiterate, doesn't necessarily mean individual teachers' views aren't changing, only that the distribution of responses is similar between years).

Let’s look at the results if the question is asked in a manner that does not directly mention standardized tests, but rather financial incentives for “academic progress, including improved reading levels, teacher evaluations, and classroom tests” (I'm assuming, perhaps improperly, that "classroom tests" are viewed by respondents as distinct from standardized state assessments). 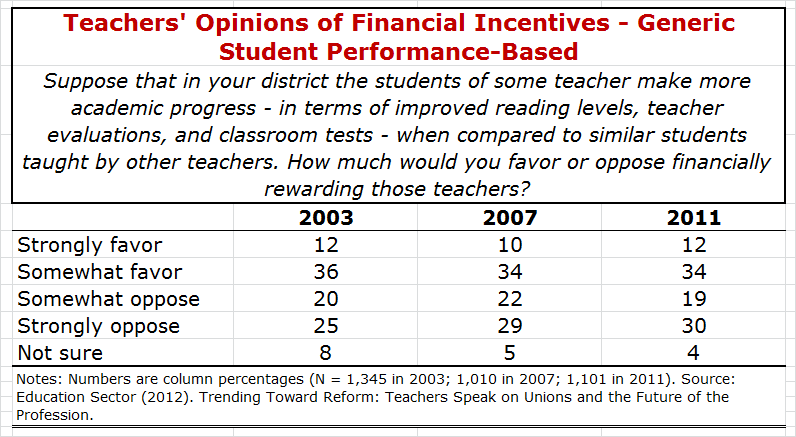 The proportion that "somewhat favor" this idea is noticeably higher, and overall support (strongly + somewhat) even approaches 50 percent, but, again, there’s very little variation between years.

(Side note: When teachers are asked about giving incentives based on ratings from principals, large, stable majorities either strongly or somewhat favor the idea in all three survey years.)

Another big policy focus these days is so-called “tenure reform." Sometimes, this term is euphemistic, with “reform” better described as “elimination." But there is some recognition, at least among anyone familiar with labor market research, that we shouldn't even consider increasing teachers’ uncertainty without some concurrent increase in their rewards – e.g., pay.

Along these lines, Education Sector asks their respondents whether they would trade tenure for a salary bump, specifically something along the lines of $5,000. In addition to saying yes or no, they also had the option of saying they’d consider the idea but the increase would have to be larger.

Around three in ten respondents would be willing to consider this proposal, about a quarter say they wouldn’t, and roughly 30 percent state that the increase would have to be much larger than $5,000. Finally, and interestingly, about 15-20 percent express uncertainty about the idea. In all cases, however, there isn’t much movement in these numbers (at least not enough to rule out error as the cause).

On a similar note, respondents were asked whether a bunch of proposals would help attract and retain “high-quality” new teachers to the profession. One of the proposals, which is often discussed in our current discourse, was increasing early-career salary in exchange for reduced pensions (note that this question wasn’t asked in 2003). 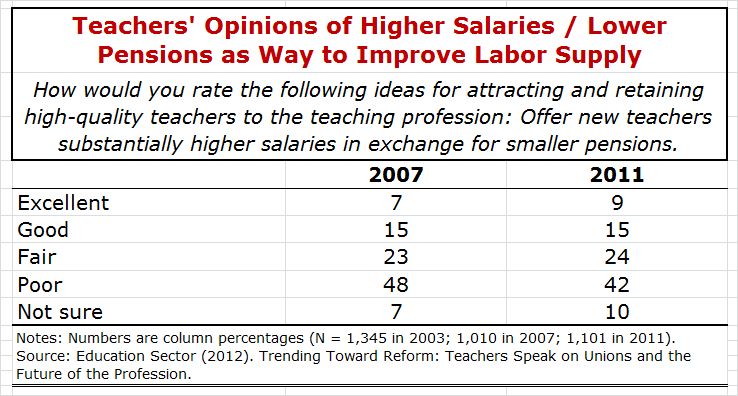 Only about one in four respondents give this proposal an "excellent" or "good" shot at working, while around 40-50 percent say the proposal’s prospects are “poor." Yet, one more time – there isn’t much discernible change here.

On the flip side, there was also little apparent change in teachers' responses to questions about other "types" of policy proposals. For instance, huge majorities continue to believe that giving teachers more preparation time during the school day would improve the labor supply, and they support giving financial incentives to teachers who work in low-performing schools.

At this point, it bears mentioning that the discussion above is not meant to say that teachers’ opinions aren’t changing at all (nor, by the way, does it imply that policies are right or wrong simply because teachers support or oppose them). For one thing, teachers represent a very large group of workers, and we shouldn’t expect huge attitudinal shifts over relatively short periods of time (that’s one of many reasons why Education Sector’s survey, which is recurring, is so useful). In addition, changes in the characteristics of the teacher workforce can cut both ways – that is, they can just as easily create the “illusion” of stability as of change.**

And, finally, there are several questions in this survey on which responses did change. For instance, a discernibly larger proportion of teachers in 2011 (vis-à-vis earlier years) were receptive to the idea that “the best way to measure teacher effectiveness is to assess students’ skills and knowledge when they first come to a teacher and to measure them again when students leave to see what progress was made." Some people used this to argue that more teachers support value-added, which is, at best, a dubious interpretation (for many teachers, “progress” does not mean estimates from econometric models that use standardized testing data).

Nevertheless, this may indicate that more teachers support some form of evaluation based on student performance (though opinions were still quite split on this question, and, again, it didn't raise the issues of how students' "skills and knowledge" are to be measured, or whether the ratings would be used in high-stakes decisions, both of which are the major sticking points).

One other example of a change worth discussing was that in the responses to a question about the general role of teachers’ unions/associations. Respondents were asked whether their “unions or associations should put more focus than they currently do on issues such as improving teacher quality and student achievement," or just stick to “traditional union issues," such as salary and benefits. 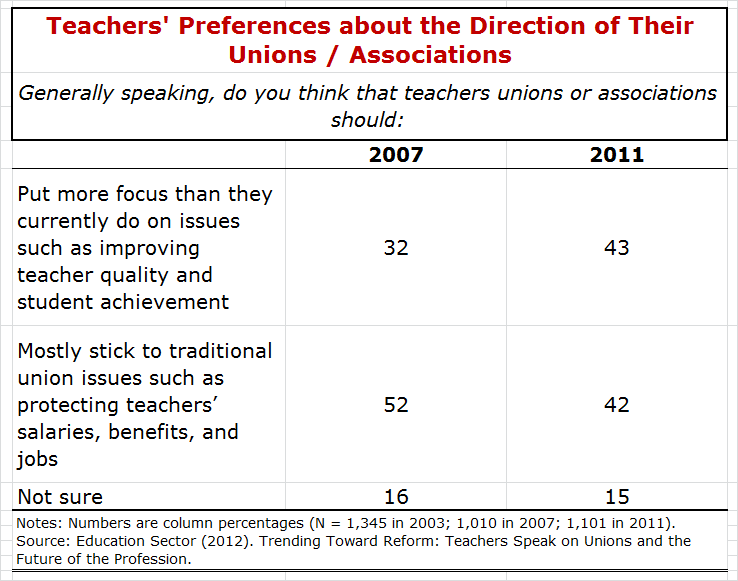 In short, the proportion of respondents saying their unions should take a more active role in “teacher quality and improving student achievement” was significantly higher in 2011 compared with 2007 – 43 percent versus 32 percent.

This change is definitely large enough to be considered "real." What it actually means, however, is a bit more complicated.

If we want to speculate (and that's all this is), one possible way to view this finding is that a larger share of teachers think these issues are important, and thus they want the organizations that represent them to get more involved. This is plausible, but an alternative interpretation, which is not necessarily incompatible, is that more teachers are concerned about the direction of education policy over the past few years, and thus want their unions more involved in the policy making process. In either case, the question is not appropriate for assessing whether teachers are “leaning toward” a specific group of reforms.

Overall, then, like any group of professionals, teachers’ views of policy are neither monolithic nor static. Teachers do seem to “change their minds” about some policies, particularly as they accrue experience (see the comparisons by experience in the Education Sector report).

So, given that the teacher workforce itself is changing as well, with the experience distribution becoming increasingly bi-modal (a large group of experienced teachers and a large group of less experienced teachers), it is possible that we'll observe a shift in overall attitudes toward a few key policies, particularly those associated with experience, in the near future. Since, however, these relatively short-term shifts, if they occur, will most likely reflect changing workers more than "changing minds" per se, it remains to be seen whether they will persist (and it bears noting that the numbers discussed above reflect some portion of this compositional change in the workforce).

In the meantime, to whatever degree the results of this survey are an indication, the idea that teachers are already "warming up" to the market-based reform agenda, or that any future changes in overall attitudes will be permanent, seems like wishful thinking more than anything else.

* For example, if the average teacher is younger today than in the past, and younger teachers tend to be more supportive of a given policy, then aggregate support for that policy might increase, even if nobody actually changed their views. Such compositional changes are important, but they may be fleeting - e.g., as teachers accrue experience, their views may begin to resemble those of their experienced colleagues today. For his part, Jay Mathews’ treatment of this issue is slightly puzzling. He explicitly discusses this difference between age effects (e.g., do younger teachers hold different views?) and cohort effects (e.g., do younger teachers today have different opinions than younger teachers in previous years?). Yet he still conflates them, by ignoring the changes over time and instead portraying the surveys’ comparisons of younger and older teachers as evidence that teachers are “changing their minds." Nevertheless, he discusses the issue, which is very important (and he also notes that the Teach Plus sample is non-random).

** This survey breaks down responses by experience and survey year, but not both. The latter might have given some idea of whether teachers’ views are changing over time (albeit a relatively short period of time), while crudely holding constant experience level. Most likely, this breakdown was not presented because the samples were too small to permit it.