Attitudes Toward Education And Hard Work In Post-Communist Poland

Economic returns to education -- that is, the value of investment in education, principally in terms of better jobs, earnings, etc. -- rightly receives a great deal of attention in the U.S., as well as in other nations. But it is also useful to examine what people believe about the value and importance of education, as these perceptions influence, among other outcomes, individuals’ decisions to pursue additional schooling.

When it comes to beliefs regarding whether education and other factors contribute to success, economic or otherwise, Poland is a particularly interesting nation. Poland underwent a dramatic economic transformation during and after the collapse of Communism (you can read about Al Shanker’s role here). An aggressive program of reform, sometimes described as “shock therapy," dismantled the planned socialist economy and built a market economy in its place. Needless to say, actual conditions in a nation can influence and reflect attitudes about those conditions (see, for example, Kunovich and Słomczyński 2007 for a cross-national analysis of pro-meritocratic beliefs).

This transition in Poland fundamentally reshaped the relationships between education, employment and material success. In addition, it is likely to have influenced Poles’ perception of these dynamics. Let’s take a look at Polish survey data since the transformation, focusing first on Poles’ perceptions of the importance of education for one’s success.

Our data come from the Polish Panel Survey (POLPAN), an excellent, nationally-representative longitudinal survey of Polish individuals that is administered by the Institute of Philosophy and Sociology at the Polish Academy of Sciences. The survey was first conducted in 1988, and has been repeated five times since then (in 1993, 1998, 2003, 2008 and, most recently, in 2013). The survey includes a series of questions about the importance of various factors for the generic outcome of “achieving success in life” (for analysis of all these questions/factors, see Baczko-Dombi and Wysmulek 2014 [full version in Polish], or this summary of the analysis in English).

The graph below presents the distribution of responses to the question about the importance of a “good education” in each wave of POLPAN. 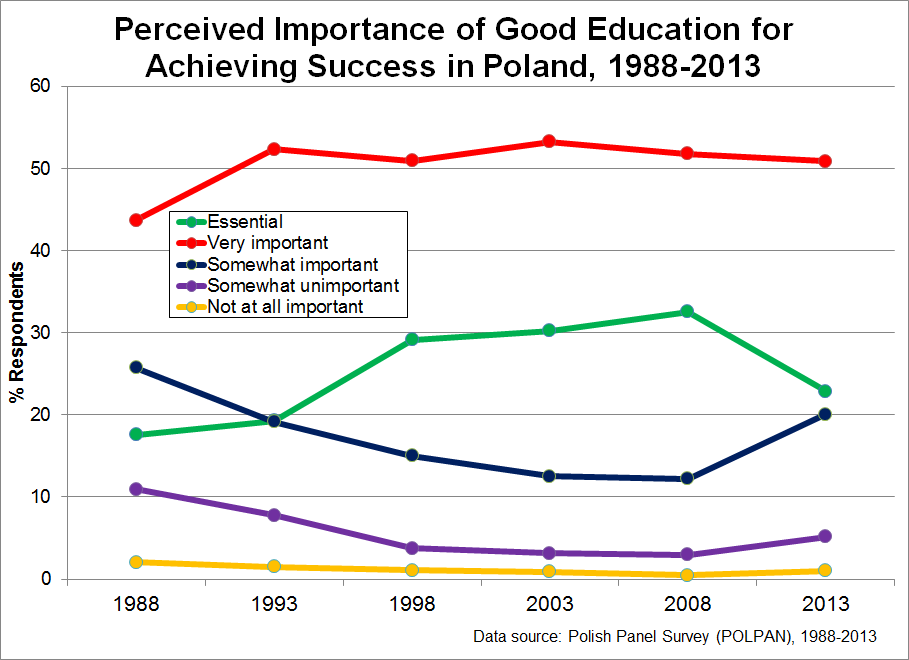 As you can see, during the years subsequent to the transition to a market economy, there was a substantial increase in the proportion of respondents saying that education is “essential” or “very important." Prior to the transformation, in 1988, slightly over 60 percent of respondents believed that education was “essential” or “very important." Just ten years later, the proportion had increased to around 80 percent. Although explanations of trends in attitudes are difficult (and sometimes put forth in a rather haphazard manner), it is more than plausible that this increase was partially attributable to the transformation itself.

For instance, the Communist system in Poland (and elsewhere) deemphasized the value of education in favor of what you might call a proletarian ethic. A coal miner could potentially earn more than a university professor (and, given the scarcity of consumer goods for purchase, earnings were but one form of employment rewards). The connection between education and material success started to change as a result of the transition, and, one might speculate, so did attitudes.

Let’s just quickly put these figures in cross-national context, using data from the 2009 International Social Survey Programme (ISSP), which includes a question that is similar to POLPAN’s - it queried respondents in different nations as to their belief in the importance of education for “getting ahead." 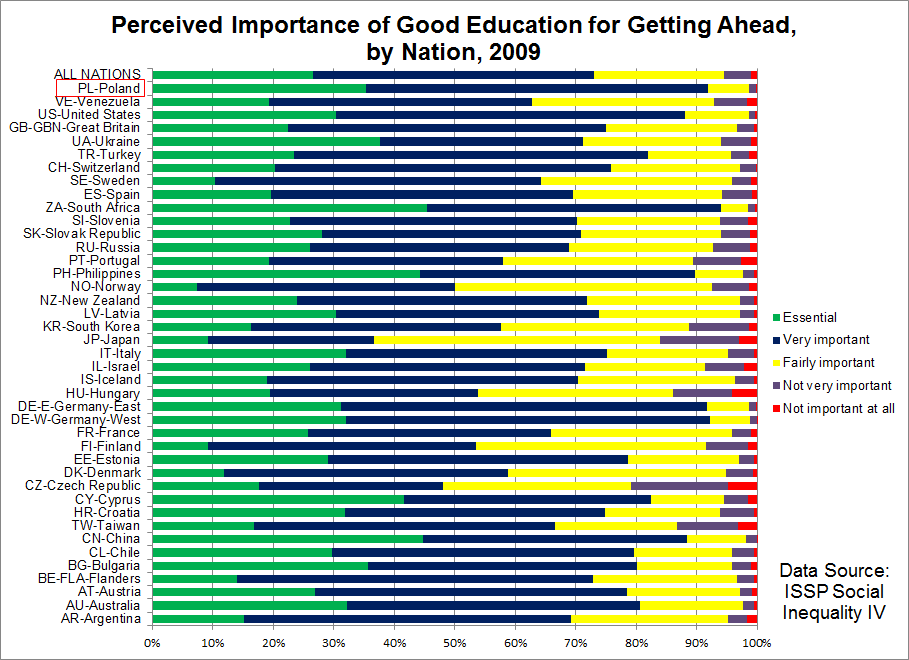 This graph is a bit busy, but you’ll notice that the proportion of 2009 Polish respondents saying that education is “essential” (green) or “very important” (dark blue), which roughly matches the POLPAN figures for 2008, is among the highest of all nations participating in the ISSP. Comparably large percentages are found only in the U.S., Germany, the Philippines, South Africa and, interestingly, China. Put simply, a belief in the importance of education for one’s success appears to be exceptionally strong in Poland.

Now, we might return to the first graph, specifically to the change that occurred between 2008 and 2013, during which time there was a decline in the proportion of POLPAN respondents saying that education is “essential” or “very important” for getting ahead. Granted, these estimates have margins of error, and one should generally avoid making too much of short-term changes in survey estimates, but it might be interesting to discuss this (apparent) decline in the belief of the value of education.

One immediate response to this trend might be to suspect that the global recession played a role. Poland did not see the kind of negative GDP impact of the recession that was experienced in many other nations, but there was a clear jump in the Polish unemployment rate during this time. After decreasing rapidly between 2003 and 2008, the trend reversed completely in 2008, and the rate has risen steadily since then. It is at least plausible that these poor labor market conditions contributed to the shift in attitudes regarding the importance of education (e.g., if highly educated new entrants to the labor market had trouble finding a job, as was the case in Poland during the recession).*

Another possible factor is the rather dramatic increase in educational attainment over the past 20 years. According to the OECD, the proportion of Poles between 25-34 years of age with a tertiary degree increased from 14 percent in 2000 to 39 percent in 2011. This rather massive influx of more highly educated young workers into the labor market almost certainly had implications for the payoff to education, as well as, perhaps, individuals’ perceptions of it (and, as discussed below, the 2008-2013 decrease in belief in the importance of education is most pronounced when comparing young respondent cohorts).

Putting aside the 2008-2013 change for a moment, let's take a look at one more “merit-based” factor, as education is obviously not the only thing that people believe makes a difference in determining success. Perhaps the most “traditional” manifestation of meritocracy is the generic idea that people succeed by working hard. The graph below is exactly the same as the first one, except this time, it is the distribution of responses to a question about the importance of hard work in achieving success (the vertical axis retains the same scale as that of the first graph). 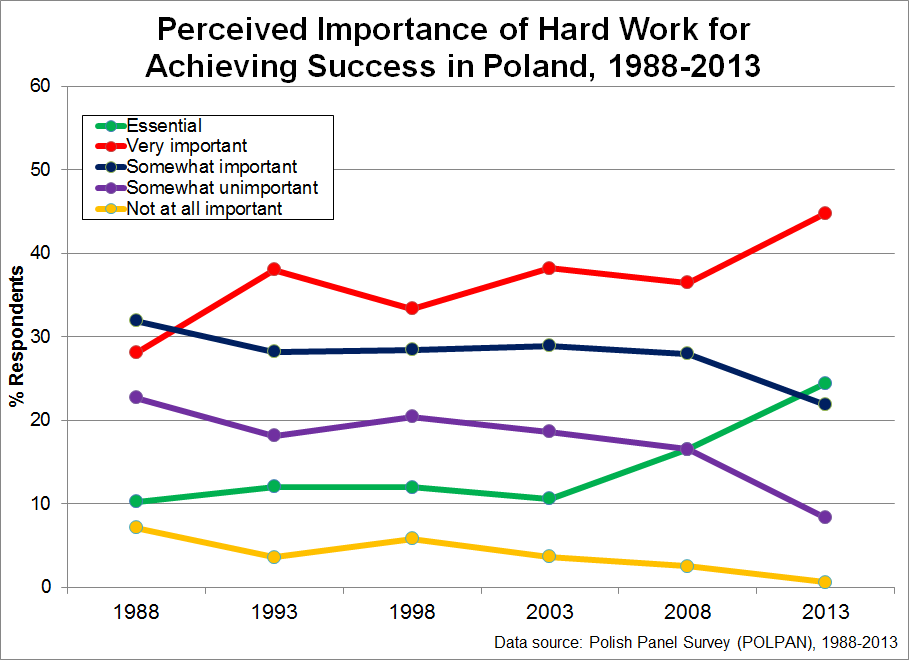 Once again, we see an increase in the “essential” and “very important” responses during the years following the transition from Communism (though the increase is a bit less pronounced than for the education question). In this case, however, there is also a very sharp increase in the proportion of respondents giving these answers between 2008 and 2013 (one which is also evident in the increased proportion of respondents answering “essential” between 2003 and 2008).

We might quickly examine these divergent, seemingly conflicting trends between 2008 and 2013. In the table below, responses to both questions have been converted into a scale of 1-5, ranging from “not at all important” to “essential” (this is generally not good practice for these types of categorical variables, but it’s fine for our illustrative purposes here). We might view this as an index of strength of belief in education/work as a determinant of success, with higher values indicating stronger belief in the importance of each factor.

The simple averages in the table are presented overall, and then broken down by age and education, two variables that we’ve found to be significant predictors of these attitudes in some quick, illustrative multivariate models. To keep the discussion simple, we have coded both variables into a small number of categories.** 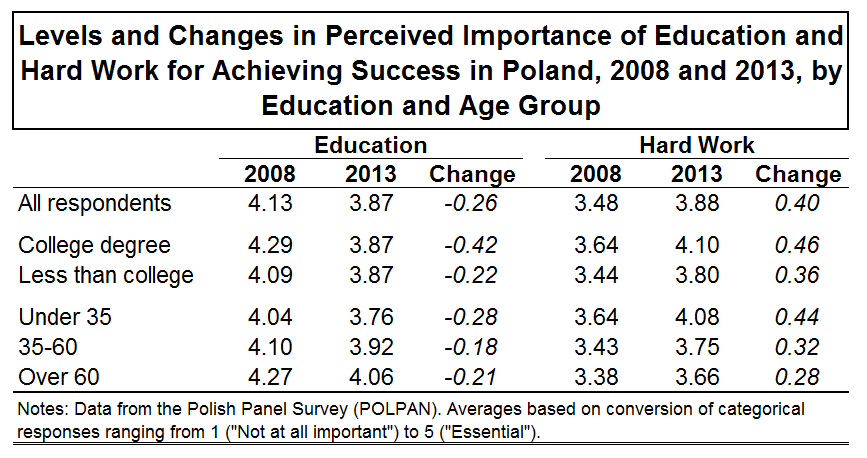 Just to reiterate, these estimates, particularly the figures (and changes) for each education/age subgroup, reflect error, and should be interpreted with caution. That said, beginning with education, the table shows that the decline in belief in the importance of education for getting ahead was most pronounced among younger Poles (i.e., under 35), and among those with a college degree. The exact opposite, however, is found in the case of the question about the importance of hard work – that is, belief in hard work as a determinant of success increased more among younger and more educated Poles than among their older and less educated counterparts.

We may present a more thorough analysis of these attitudes and trends in a future post. In the meantime, there are a couple of overall takeaways here. First, in Poland, belief in the importance of both education and hard work is strong, and has increased substantially since the transformation.

Second, it seems that trends in views about the importance of these two “traditional” merit-based factors may be diverging in recent years, particularly (but not entirely) among younger and more educated Poles. It remains to be seen whether these trends continue in future waves of POLPAN.

* Of course, this can cut both ways – during recessions, less educated workers often have the most trouble finding and keeping jobs, which could ostensibly reinforce their views on the value of educational attainment.

** Note that this table includes the full samples – i.e., it is not limited to respondents who participated in both the 2008 and 2013 waves. In addition, education and age may be correlated (or, more accurately, negatively correlated, given the increase in educational attainment in Poland).