Last week, we published a report on the probable implications of the coronavirus pandemic for K-12 education funding. My co-author Bruce Baker and I present a bunch of data on the impact of the 2007-09 "Great Recession" on education funding, as well as outcomes illustrating states' responses to the budget crisis caused by the recession. Using insights from these descriptive analyses, we offer a set of recommendations for minimizing the harm of the coronavirus recession on school budgets.

I won't go through our findings and recommendations individually; you can download the full report, or read the executive summary. I do want to discuss on one overarching theme of the recommendations, and it's very simple: any truly effective response to the impending budgetary crisis cannot consist solely of a federal assistance package. The way states fund public schools has to change, with a forward-thinking focus on faster recovery from this crisis as well as systems better equipped to handle future crises. Chess rather than checkers.

To be clear, federal funding will be absolutely crucial in smoothing the large decreases in revenue that will occur. Without this federal help, there will likely be cuts to school budgets (and those of other public services) so severe that recovery in many states may be a matter of decades rather than years. Moreover, districts serving larger shares of disadvantaged students will bear a disproportionate amount of the harm. Accordingly, we recommend that federal funds be drawn out in two "phases" over a 5-7 year period, and that states be required to distribute them in a manner that targets assistance to those districts that need it the most. But this won't be enough.

In our report, we discuss how the 2009 federal "stimulus package," which was passed through states and distributed to districts over a two year period, did not, of course, prevent school funding cuts entirely, but at least averted massive short term cuts. Once these funds ran out, however, states faced a "fiscal cliff" of sorts and had a choice. They could either: 1) raise revenue and reinvest in their schools or; 2) continue business as usual, letting the budget cuts linger for years.

Some states chose door number one (see Figure 5 in the report, pasted below). In Illinois, Connecticut, and New Hampshire, for example, K-12 spending (adjusted for labor costs) was 10-20 percent higher in 2017 than it was in 2009. Most states, however, took the second option, albeit to widely varying degrees. In many of these states, education funding recovered slowly—so slowly, in fact, that adjusted spending was lower in 2017 than it was in 2009 in all but 12 states. 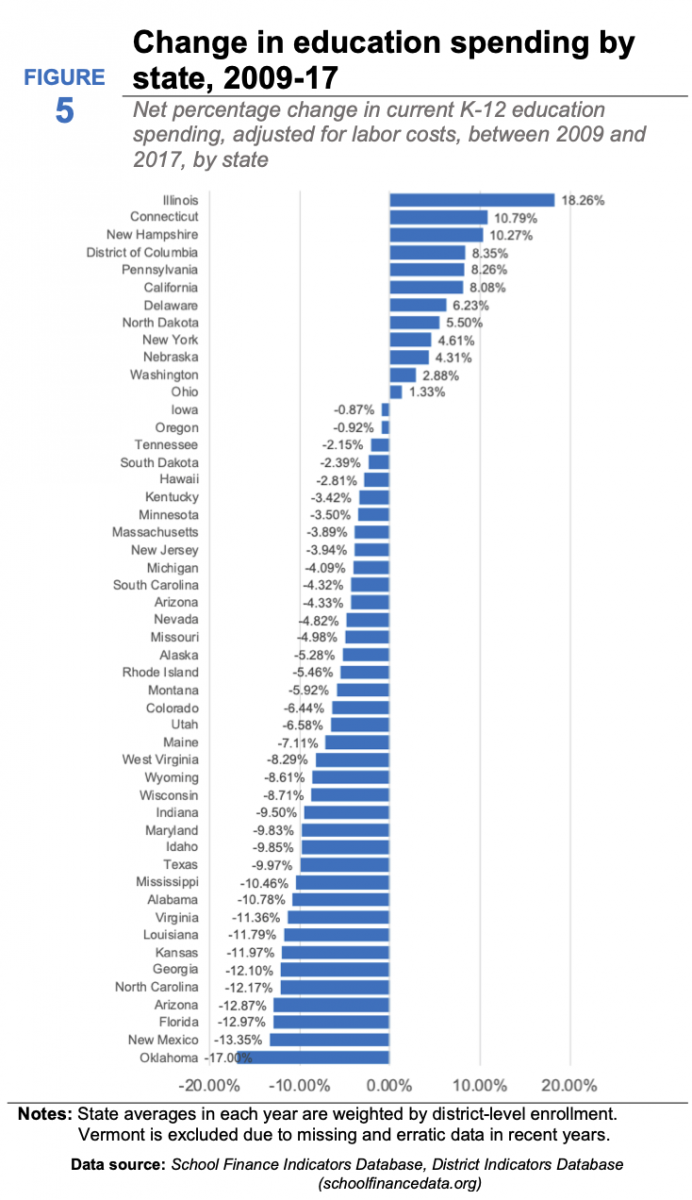 It is crucial to note that this budget crisis (the effects of which persist even today) was made worse by policy choices that predated the Great Recession. For over 25 years, we have seen a steady erosion of state and local revenue (see Figure 9). 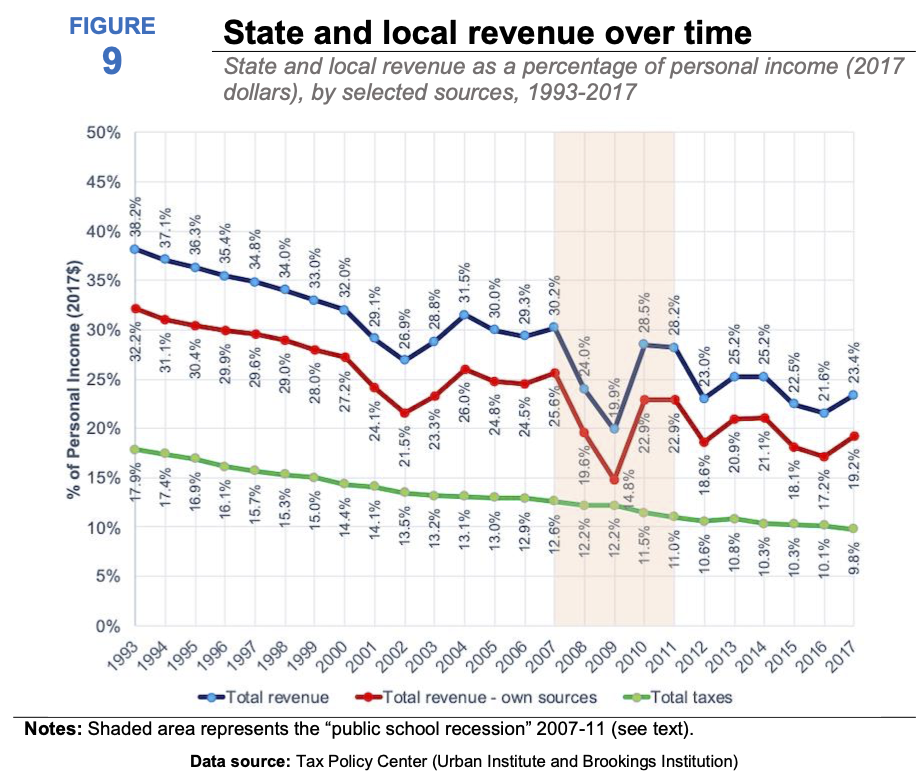 As a result, when the recession of 2007-2009 hit, many states were unprepared. Even as their economies recovered, however, too many states did not reinvest adequately in their schools (see Figure 8). In fact, a few states cut taxes during this time. Perhaps policymakers thought the 2007-09 recession and its aftermath was a "once in a lifetime" crisis. They were wrong. 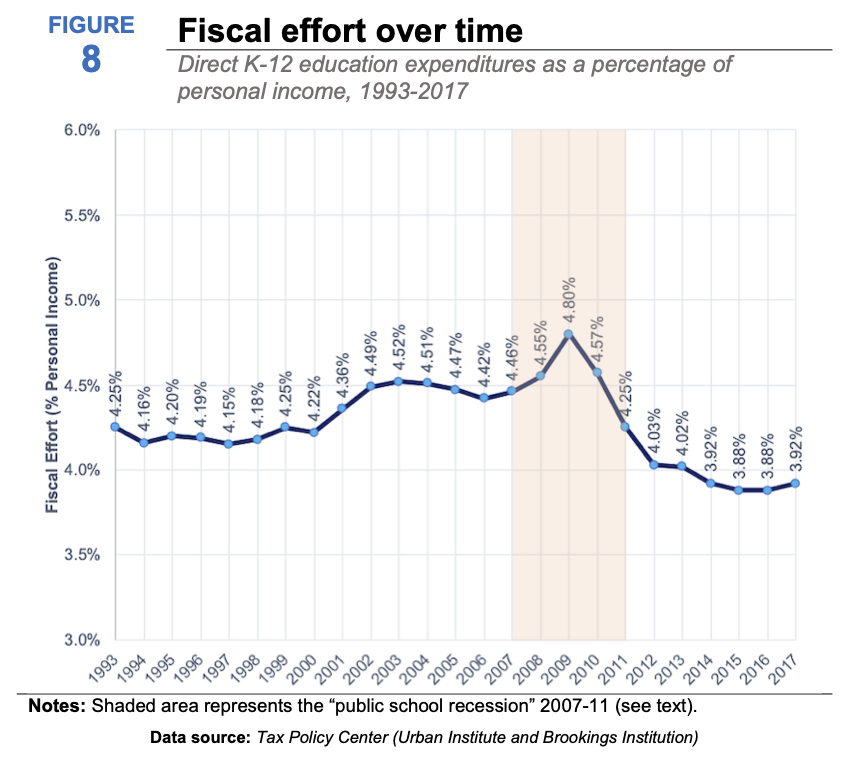 In the coming months and years, there will be budget shortfalls. This is inevitable. What is not inevitable—indeed, what is directly in the control of policymakers—is how big these shortfalls will be and how long they will last.

Federal assistance can go a long way toward smoothing out the gaps in the short term, but the longer term responsibility will rest with states. Almost 90 percent of public K-12 education funding comes from state and local sources (mostly income, sales, and property taxes). By investing larger shares of their economies in education (i.e., raising revenue), as well as by taking other steps, such as building up budget reserves, funding schools more progressively, and balancing their revenue "portfolios," states will be in a position to recover quickly as well as to deal with the next crisis when it comes.

The high school seniors who will graduate later this year began kindergarten in the fall of 2007, weeks before the "official" start of the Great Recession. Most have spent their entire K-12 careers in schools that were either facing budget cuts or trying to recover from them. If states fail to act, this will happen again. It may be even worse. And it will be because we let it happen.