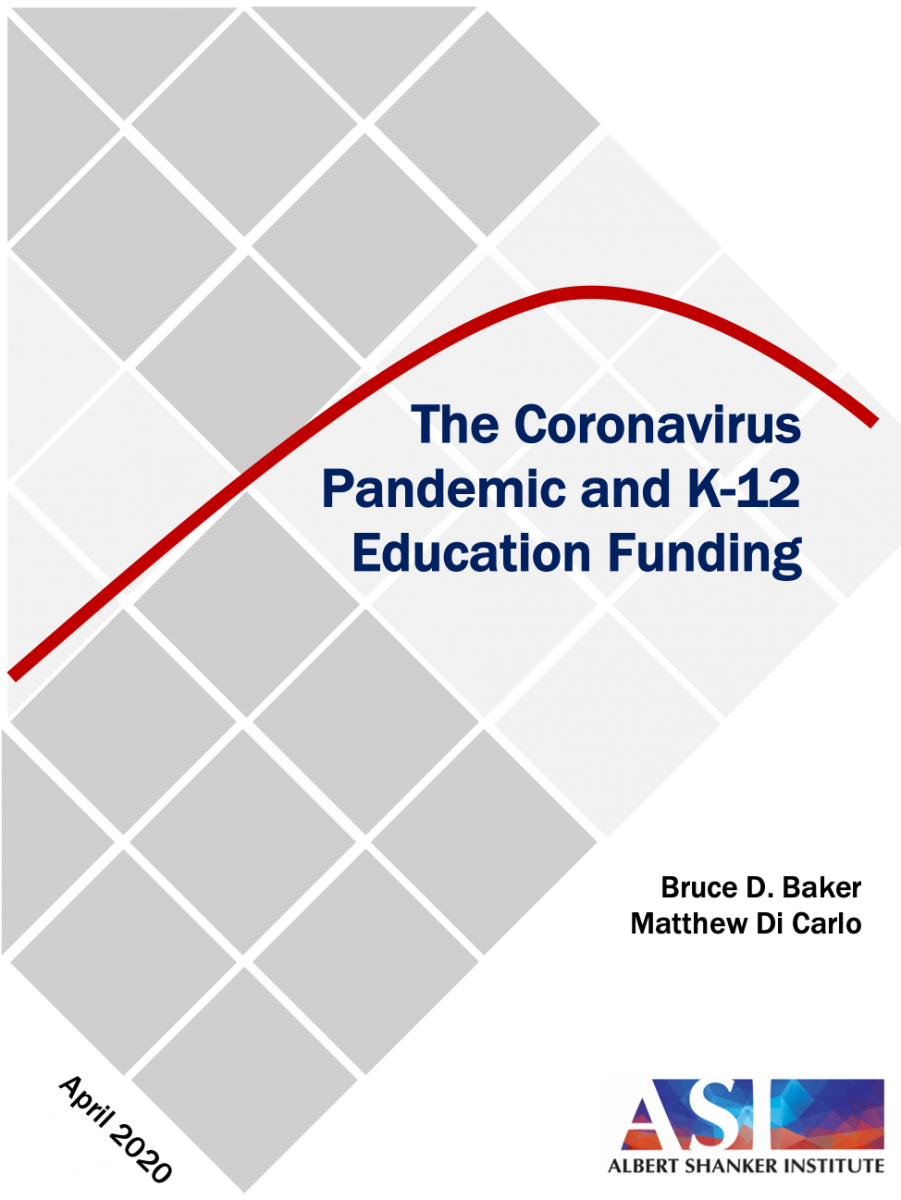 The most terrible and lasting effects of the coronavirus pandemic will of course be measured in loss of life. But a parallel tragedy will also be unfolding in the coming months and years, this one affecting those at the beginning of their lives: an unprecedented school funding crisis that threatens to disadvantage a generation of children.

It currently is difficult to make any precise predictions about the magnitude of the economic recession caused by the coronavirus pandemic, except to say that it has already started and it is likely to be severe. The revenue that funds public K-12 schools—almost 90 percent of which comes from state and local sources—will see large decreases. There will be cuts.

Making things worse, school districts in many states have yet to recover from the last recession, the so-called Great Recession, which officially began in late 2007 and devastated state and local education budgets. That is, many jurisdictions will be facing a possibly unprecedented funding crisis while they are still digging out from the last one.

Students in the senior class that will graduate this spring started kindergarten in fall 2007. They have spent most of their K-12 careers in schools either facing budget cuts or struggling to recover from them—this means, for example, fewer teachers and support staff, larger classes, and a narrower array of academic and extracurricular programs. The children who begin formal schooling in fall 2020 may be facing the same fate.

States and districts, however, are not powerless; there is a path forward. It will not prevent all damage, and it will require forward-thinking policymaking, but it can mitigate the severity and duration of the coronavirus pandemic’s impact on public school funding, as well as make states and districts better prepared for the next crisis.

In this report, using data from multiple sources, we describe the effects of previous recessions, particularly the Great Recession, on K-12 education finance, as well as the federal, state, and local policies and trends that mediated—for better or worse—the impact of these downturns on public school budgets. We then use these lessons to offer recommendations for short- and long-term responses to our current crisis.

Download the full report (PDF) or continue reading the executive summary below.

The impact of the Great Recession on education funding

The Great Recession of 2007-09, and its aftermath, was a disaster for K-12 education funding in the U.S., and a persistent disaster at that. We show that:

The large declines in revenue stemming from the Great Recession meant that K-12 education cuts were a certainty. Yet several state and local policy trends, many of them predating the Great Recession by years, may have exacerbated the severity and duration of the recession’s impact. We focus on four main factors, all of which inform our plan to address the current situation:

What we learned from the 2009 federal stimulus

The primary federal response to the education budget crisis caused by the Great Recession was the 2009-10 State Fiscal Stabilization Fund (SFSF), which was part of the American Recovery and Reinvestment Act (often called the “stimulus package”). This federal assistance was successful insofar as it gave states’ economies more time to recover, so that cumulative cuts were less severe. But two key aspects of the SFSF provide lessons going forward:

Recommendations for addressing the coronavirus recession’s impact on school budgets

Our recommendations, which are greatly informed by experience in past recessions, particularly the Great Recession (and the federal assistance package), are divided into two general categories: short-term (federal assistance); and longer-term (states’ responses).

In March 2020, the federal government passed roughly $13 billion in K-12 education aid (part of the Coronavirus Aid, Relief, and Economic Security (CARES) Act to help with the coronavirus crisis’ fiscal impact. There is widespread agreement that additional federal K-12 education aid will be required. It is our position that this federal assistance must be distributed with a new approach. We recommend:

Federal assistance will be crucial during the first few years of the coming recession, but this is also an opportunity to improve state school finance systems through this painful process. Education funding is primarily a state and local affair, and so truly sustainable solutions cannot take the form of federal aid with states continuing business as usual. 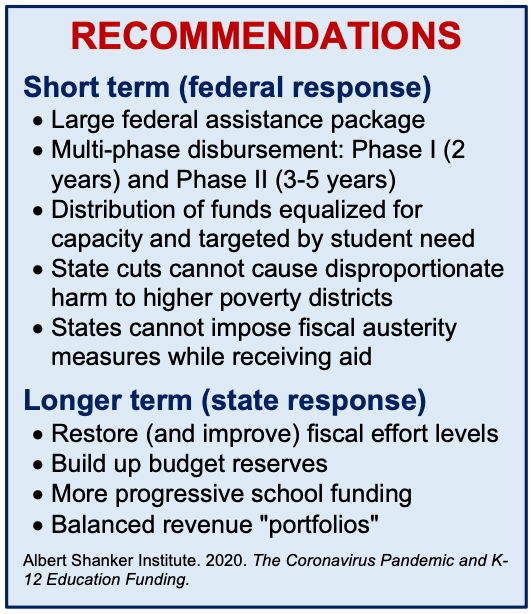 Accordingly, our longer-term recommendations focus on what states should be doing once their economies begin to rebound from the current recession (although much of the planning can and should begin immediately). We must approach our next period of prosperity more wisely.

We acknowledge that virtually every component of this plan will be politically controversial for state and federal lawmakers alike. It bears reiterating, however, that we are entering this current pandemic-fueled recession having never recovered from the Great Recession. We are on the verge of this happening again, perhaps even worse this time. We cannot avoid a budget crisis, but we can attenuate its negative effects and shorten its duration. The alternative is to once again suffer funding cuts that threaten the quality of public schooling and equal educational opportunity over a period of many years.

The severity of the current crisis should, as in the human immune system, act as a wake-up call to strengthen public school finance not only so as to recover, but also to make us strong enough to withstand future crises.

Watch the video of the webinar