You needn’t look far to see that state public employees are under intense scrutiny. Politicians and other commentators are using rhetoric that is simplistic and often misleading. But, in the debate over their relative value, these state workers have an additional problem: I get the strong feeling that most Americans have little idea what they do.

If you ask the average person to describe what a public employee does, you might hear the word “bureaucrat." Those who wish to dismantle large chunks of the public sector have come to use the term as the pejorative for all public servants (most often in the federal government context) - probably in the hope that it will conjure up images of large government buildings filled with endless rows of faceless, overpaid desk workers collating papers.

So, who are these state public employees? What are they actually doing? These are very basic questions, yet they are rarely addressed in detail, at least not lately. And, let’s be honest – in one way or another, our tax dollars do pay for these workers’ services, and regardless of your views on state budget troubles, it’s always good to know what you’re paying for. Luckily, of course, the question is easily answered. In the simple table below, using 2009 data from the Occupational Employment Statistics program of the U.S. Bureau of Labor Statistics, I present the breakdown of state government workers by occupational category (note: these categories are comprised of varying numbers of similar detailed occupations, and while my examples in the table are the largest, they are not the only ones in each category).

In order to summarize this table, let’s suppose you’re invited to a party to meet ten people, who are a roughly representative sample of the 4.5 million state employees across the nation. Let’s meet the bureaucrats! 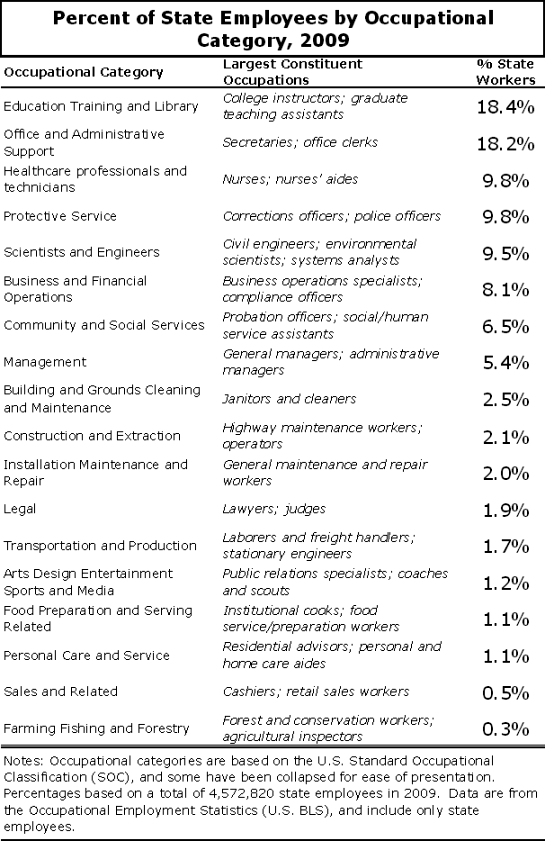 Arriving at this party, you expect to spend most of the night talking to seven or eight bureaucrats, so you might as well start off by introducing yourself to them (you should probably get a drink first). Instead, you’ll find one person (maybe two) that ostensibly fits the bill – a manager, compliance officer, or business specialist in a state agency. You’ll be anticipating boring, dull conversation with a dull, boring paper-pusher. Instead, you’ll find a well-educated professional, one who could have probably earned a lot more in the private sector (salary plus benefits). He might complain about his job – how he doesn’t have enough staff or resources due to years of budget cuts, and how, without this work, the basic services you take for granted would cease to exist. You ponder that, get another drink, and move on.

Two of your fellow partygoers will be a college professor and her teaching assistant. They might quote Max Weber or James Joyce, right in the middle of telling you how, every year, the erosion of public services causes their state school’s tuition to rise while programs get cut, at the same time the demand for college graduates is outpacing supply. The professor might also mention how she is underpaid relative to his colleagues in private universities.

As you’re talking, look around and invite the scientist into the conversation. She is a civil engineer or environmental scientist, and she might be building a bridge out of cocktail stirring sticks. She spends her days making sure your water is safe to drink, or your bridges are safe to cross. She might work on a state grant or other program that will be cut from the budget any day now. She’s not sick with worry about finding another job – her skills are portable – but she is worried about the public's safety.

Then you’ll meet a nurse or x-ray technician, who works in a state hospital. He acknowledges that he still feels like he has a lot of job security because of the demand for his skills, but that seems to be changing in many places during the recession.  He also tells you how his hospital continues to deal with budget cuts, and how their staffing and equipment are increasingly subpar. Brace yourself for a couple of anecdotes about how these issues have affected his patients.

Now you’ve met half the room. The night is half-over. Go talk to the corrections officer (don’t call her a “guard”). She’ll have some of the most gripping stories that you’ve heard in a long, long time. They also make it very clear that her working conditions are among the most stressful in the world, and how cuts and overcrowding are making things worse. You’ll marvel at how she manages to maintain her pleasant disposition, despite doing this work for relatively low pay. And no – she has never fired her weapon.

Get another drink and introduce yourself to the social worker. He works in a state department that helps lower-income people find jobs and homes, or places children in foster homes. He has an advanced degree but earns little more than those without one. He is idealistic and believes in what he does, even if the safety net he helps provide is losing funding even as demand is growing. Promise him you’ll donate to charity soon.

You’re almost done, but you’re having hypothetical fun at this hypothetical party, so you’re in no rush. Strike up a conversation with your seventh new friend. He’s a minority in the room – not a professional per se, but a janitor, maintenance worker, or crane operator. He’ll call it “real work," and you’ll end up agreeing with him. Unlike most of the other people in the room, he probably makes a little more than similar workers in the private sector, but his friends and colleagues are being laid off every day - they have the hardest time keeping jobs that pay decent wages during a recession. You wonder if you could possibly do his job for even a week.

Save the two administrative support employees for last. They are secretaries or clerks in public agencies. They also probably earn a little more than their friends in the private sector, yet they also probably feel a little more vulnerable than others in the room (most likely, at least one of them has already had to accept furloughs). They’ll tell you that their jobs are difficult but rewarding, and that they know more about how government operates than their bosses do. Stick with them for the rest of the night. You’ll have a lot of fun, and they’ll probably take you to a bar afterwards.

Congratulations - you’ve met the state employee workforce. You didn’t really find any bureaucrats, at least not any who fit the description you’ve heard so often. You did, on the other hand, meet a roomful of smart folks with a wide range of skills and talents, most of whom could earn more working outside of government.

So, no matter what you think about taxes or budgets, or what needs to be done about the current crisis, don't buy the attempts to paint state employees as faceless, overpaid desk jockeys who are shielded from the "real world" of the private sector. It's a facade, pure and simple - one that is supposed to breed resentment. These people work for and around us, usually very hard with decreasing resources. Without them, our basic services – and our communities – suffer. Remember that, and get home safe.