Over the past few years, due to massive budget deficits, governors, legislators and other elected officials are having to slash education spending. As a result, incredibly, there are at least 30 states in which state funding for 2011 is actually lower than in 2008. In some cases, including California, the amounts are over 20 percent lower.

Only the tiniest slice of Americans believe that we should spend less on education, while a large majority actually supports increased funding. At the same time, however, there’s a concerted effort among some advocates, elected officials and others to convince the public that spending more money on education will not improve outcomes, while huge cuts need not do any harm.

Often, their evidence comes down to some form of the following graph: 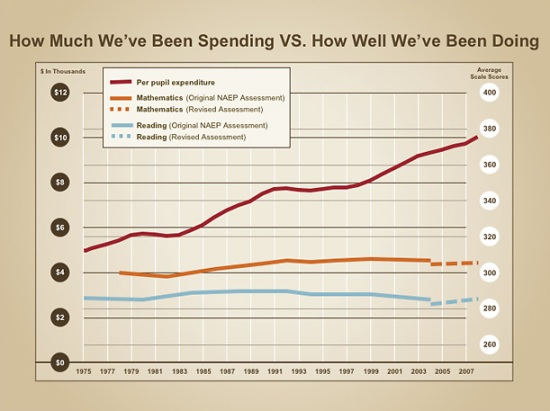 This graph shows that per-pupil expenditures (red line) have roughly doubled since 1975, while results on the National Assessment of Educational Progress (NAEP) have been relatively flat in both math (orange) and reading (blue). In other words, we are spending more and not getting better results. The conclusion: Money doesn’t really matter.

By itself, using this evidence to support “money doesn’t matter” and similar arguments violates a dozen principles of sound policy research (not to mention graph design). For instance, overall spending amounts mask how the money is spent and whether the increase has occurred disproportionately in some places (and on some subgroups of students). Similarly, the NAEP data are cross-sectional, and conceal changes in the student population. Most basically, however, the coincidence of two trends (in this case, spending and test scores) by itself proves nothing about the causal relationship between them.

In fairness, though, these arguments aren’t always entirely grounded in simple graphs. There is a widespread belief that the “research shows spending isn’t correlated with student achievement."

Our new report, written by Rutgers professor Bruce Baker and entitled "Revisiting the Age-Old Question: Does Money Matter in Education?" reviews this body of evidence.

Contrary to the canned rhetoric flying around public discourse on education finance, high-quality research like that discussed in Baker’s review does not lend itself to broad, sweeping conclusions. Some things work and others don’t, and so the strength and consistency of the money/results relationship varies by how it’s spent, the students on whom it spent, and other factors. Sometimes effects are small, and sometimes they’re larger.

Nevertheless, on the whole, Baker’s review shows that there is a consistently positive effect of higher spending on achievement. Moreover, interventions that cost money, such as higher teacher salaries, have a proven track record of getting results, while state-level policies to increase the adequacy and equitability of school finance have also been shown to improve the level and distribution of student performance.

Finally, and most relevant to the current budget context, the common argument that we can reduce education funding without any harm to (and, some argue, actual improvement of) achievement outcomes has no basis in empirical evidence.

Without question, there is plenty of room for improvement in how we finance our public education system, and much to learn about how spending affects short- and long-term outcomes. But the fact that some people are not only arguing that money makes no difference, but also that reducing funding will cause no harm (and might even help), can only be described as a fantasy, dressed up with misleading graphs, unproven “off the shelf” cost-cutting measures and gigantic misinterpretations of the impressive body of evidence on this topic.

More funding will not solve all our problems, but, as Baker puts it, “sufficient financial resources are a necessary underlying condition for providing quality education."

In other words, money matters.