Gender pay gaps receive due attention in high quality academic (e.g., England 2005) and non-academic research worldwide (e.g., IWPR, OECD), as well as in the media. It is often overlooked, however, that the size of the gap (and the gender difference in other labor market outcomes, such as career interruptions and their length) varies by job characteristics, such as occupational status, as well as by individual characteristics, such as age and, as discussed below, parenthood status.

The existence of wage cuts incurred by working mothers across countries and welfare regimes (henceforth “motherhood penalties”) is a well established, albeit not always well understood, phenomenon (e.g., Budig et al. 2016; Abendroth et al. 2014). In Poland, for example, there is a common misconception that mothers do not incur such penalties. One major reason for this is that OECD reports systematically show that Poland has one of the smallest gender pay gaps (GPGs) among all OECD nations. This leads many to infer that, since the gaps are small, there must not be motherhood penalties.

The problem is that these data do not control for important productivity characteristics, such as education, working hours, and experience. For example, in Poland (and elsewhere), women are better educated than men, which means that simple unadjusted estimates would understate gender pay gaps. The simple approaches are also misleading insofar as they do not control for occupational prestige, job complexity, and income. Studies conducted in the U.S., for example, show that the size of the gender pay gap is correlated with these variables (England et al. 2016). That is, women in high prestige, more demanding, and better-paying jobs experience higher penalties, especially when they become mothers, than women in low and medium level occupations.

So, is the situation in Poland as rosy as the OECD estimates make it out to be?

To answer this question, we estimate the size of GPGs among Polish working males and females of different parenthood statuses, using a sample of employed respondents of the Polish Panel Survey, or POLPAN. POLPAN is a nationally representative longitudinal survey, focused on describing social structure and changes therein.

The graph in the first figure, below, portrays predicted sizes of the GPGs, by number of children and occupational prestige. The sample here includes all respondents who had a job (even part-time) at the time of interview (the results are not appreciably different if the sample is limited to full-time workers only). In the model, the outcome variable is the log of net monthly earnings from all jobs. The graph represents a comparison of predicted earnings of men and women who are identical in terms of age, education, occupation and parenthood status, as well as a number of other characteristics, such as place of residence, seniority, and weekly working hours. We also controlled for calendar year. 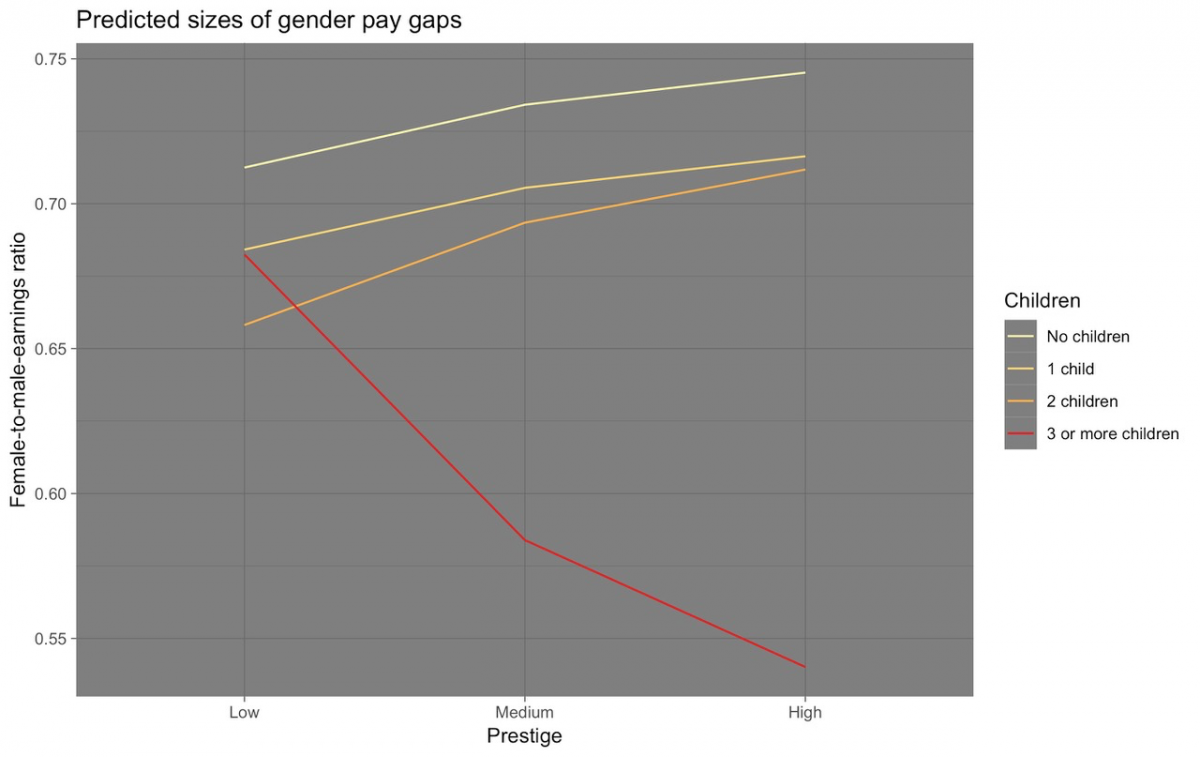 The figure suggests that the inequality in pay between men and women is actually quite substantial, and ranges between 25 and almost 50 percent, depending on the number of children and occupational prestige. The GPG declines at higher levels of occupational status – except for people with 3 or more children. For the latter group, the pay gap increases substantially as prestige increases. The pattern is rather stable throughout the whole period under study.

These results show how attempts to measure gender gaps without accounting for important productivity and individual characteristics can produce wildly misleading conclusions. Judging by the OECD data alone, Poland’s gender gaps are relatively minor. A proper comparison, however, shows them to be quite substantial.

Why are these gender gaps and motherhood penalties so large and persistent? One common explanation is that the differences are considered just and hence legitimized. In other words, it is argued, people share certain beliefs regarding the worth of women’s and mother’s work – e.g., mothers are less productive because they are more focused on family life, are less flexible, and invest less in work-related capital. Therefore, both men and women of all parenthood statuses may agree that it is fair for women and mothers to earn less than men.

We decided to run an experiment to test this explanation. We used a multifactorial (vignette) experimental design (Wallander 2009). Vignettes are short, standardized descriptions of persons or situations that are presented to a sample of respondents, and to which the respondents then provide reactions. The people or situations in the vignettes differ in terms of certain characteristics believed to be important for, in our case, the perception of just pay. These characteristics include age, gender, parenthood status, and occupation. Below is an example of a vignette used in our study (the terms in red are those that varied). 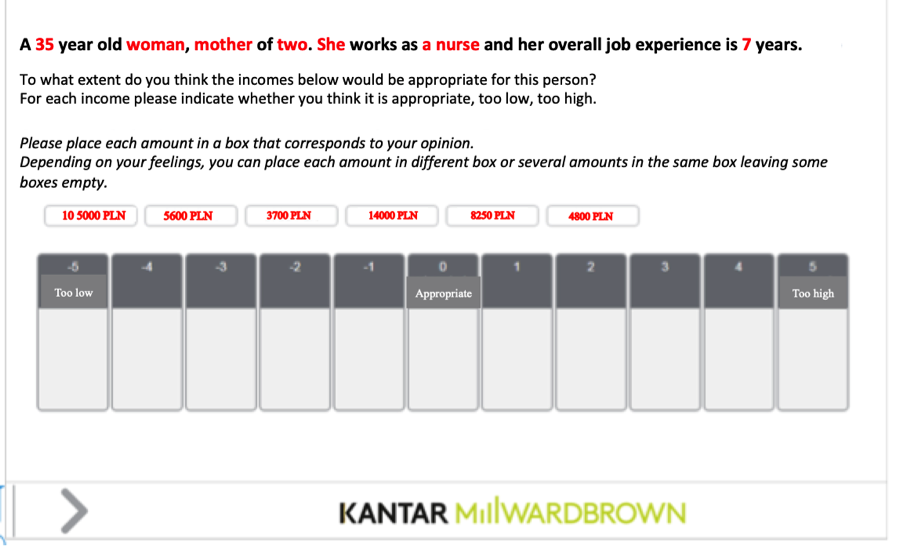 We used 996 vignettes, which were randomly assigned to respondents, with the survey conducted by a leading market research company in Poland. The respondent sample included 2,001 men and women between 20 and 64 years old. Although the sample was not random, it was designed to be representative in terms of age, gender, education, and geographical location of the Polish population.

Each respondent was shown 21 vignettes and asked to evaluate 6 (randomly assigned) amounts in terms of how fair they are in a given case. For example, in the sample vignette above, the respondent was asked if a set of given amounts represented fair pay for a 35 year old mother of two who worked as a nurse and had seven years of job experience.

The results are presented in the figure below. Once again, values below 1 indicate that women were perceived as deserving less pay than comparable men. 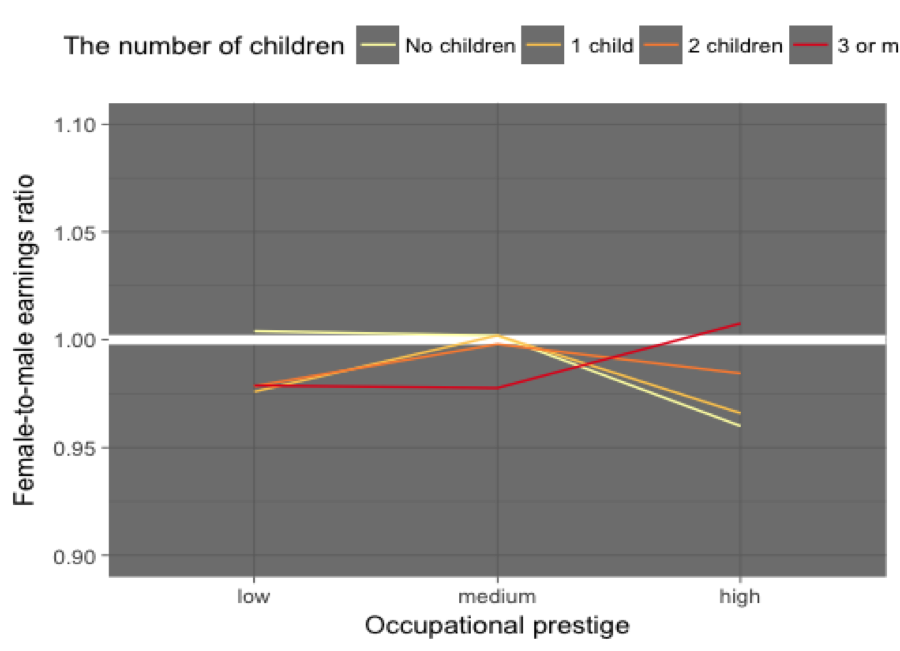 In general, women are believed to deserve only slightly lower salaries than otherwise comparable men – up to five percent, depending on age and parental status. The magnitude of the inequality in just pay differs by occupational prestige: it is greatest in occupations of high prestige, but lowest in occupations of medium prestige (except in the case of mothers of 3 or more children).

Overall, our analyses show that the gender pay gap in Poland is quite large and that mothers, especially of three or more children, incur motherhood penalties, particularly in high-prestige occupations. These gaps, however, are not perceived as just and legitimized. Similar observations were yielded by studies conducted in Germany (Auspurg et al. 2017), where the size of legitimized gaps paled in comparison with actual gaps, and in the U.S. (Jasso and Webster 1999), where younger cohorts found GPGs unacceptable.

Our findings also call into question two common “free-market” arguments against paid motherhood leave: 1) that paid leave exacerbates gender pay gaps by reducing cumulative job experience; and 2) that motherhood penalties are seen as fair and legitimate because mothers are less productive. Regarding the first argument, we show that controlling for seniority (in the first figure) as well as cumulative experience (not shown but available upon request) does not explain away the gender pay gap. Regarding the second argument, we find that motherhood penalties are not perceived as fair.

While our research does not directly test the cause of these gaps, among the most compelling explanations for them, at least in part, is discrimination.

Research presented in this post was funded by Polish National Science Center, grant no. 2015/19/B/HS6/03169. The author also thanks Zbigniew Karpinski for his contribution to this project.

Kinga, it's Steven. We know

Kinga, it's Steven. We know each other from the Institute of Sociology at UJ when Sandra and I were Fulbright Fellows there in 1997-98 (and several times since). Sandra came across an article of yours from 2014 on Poles' views of getting ahead. We're doing similar research. Let us know if you receive this and we can communicate via email.
Steven