In a previous post, I noted that confidence in organized labor really hasn’t changed that much over the past 30 years, even though union membership has been declining steadily.

This got me thinking about what kinds of factors (such as individual characteristics) are associated with being anti-union, and I decided to run a couple of simple, rough models to get an idea (keep in mind that this is a very quick treatment). As you might recall from the previous post, respondents in my dataset (the General Social Survey) were asked whether they had “hardly any," “only some," or “a great deal” of confidence in organized labor. In 2010, 60 percent said that they had only some confidence, 30 percent hardly any, and a mere 10 percent asserted a great deal of faith in unions. For the purpose of simplicity, I will refer to those with "hardly any" confidence as “anti-union."

I have to start with a few quick, optional-reading details about my data and analysis (read the notes in the graphs below if you want more information). Because so few people expressed “a great deal” of confidence, I collapse this category into the “only some” response, creating a two-category outcome variable measuring whether or not the respondent had “hardly any” confidence. The models I use (binary logit models) control for a variety of factors that might influence union attitudes, including marital status, party identification, income, race, parenthood, education, gender, age, year, labor force status, and whether or not one (or one’s spouse) is a union member. I limit the sample to respondents 21 or older, and to increase sample size, I pool data from the 2006, 2008 and 2010 surveys, for a total sample of 3,849.

The results were a bit interesting.

The numbers in the graph below are changes in "predicted probability" (in percentage points) associated with being in a particular group (e.g., being male versus female), while controlling for all the other variables (actually, holding them constant at their means). For example, all else being equal, the odds of being anti-union are 9.6 percentage points lower for people in union families (those in which at least one person is a member). This makes sense, as does the similarly large "effect" (negative 11.2 percentage points) of identifying with the Democratic Party. 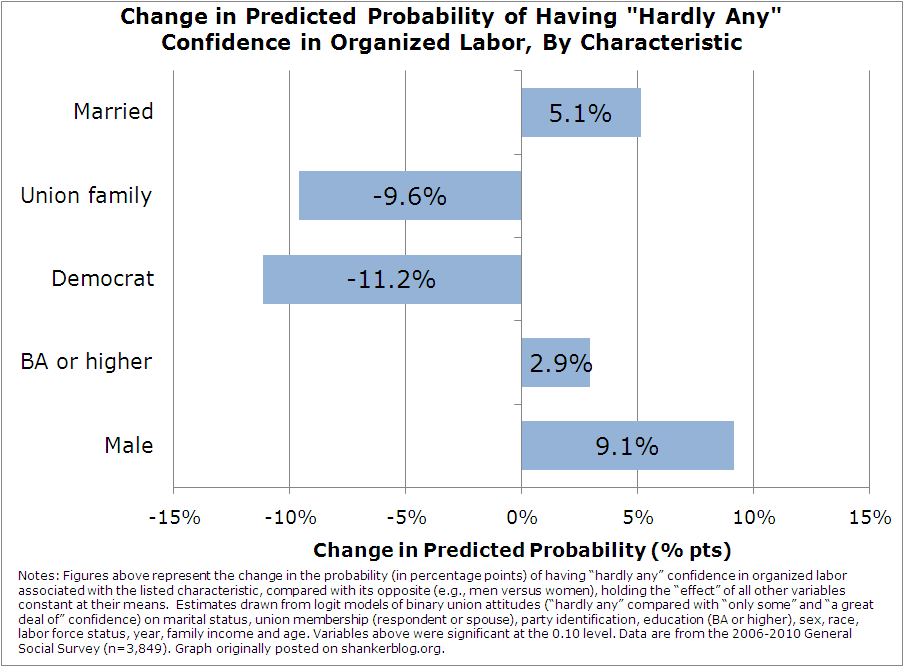 I was, on the other hand, a little taken aback to discover that men are over nine percentage points more likely to not trust unions than women, even controlling for key factors such as income and labor force participation. It’s possible that men are more skeptical of institutions in general, which might exacerbate this gender difference in the union context. But, even if that’s the case, this is still a rather large difference, one which eludes simple interpretation. Similarly difficult to interpret is the fact that married respondents are about five percentage points more likely to distrust unions (I could offer a couple of guesses as to why this might be the case, but they would be pure speculation).

Another interesting result in the graph is the education effect – having a bachelor’s degree (or higher) is associated with a modest increase in the odds of being anti-union of almost three percent.

More income is associated with less confidence in unions, but the slope was pretty flat (I didn't graph it) - the difference between the lowest and highest earners was quite small - only a couple of percentage points (the slope is a bit steeper if I limit the sample to those in the labor force).  There was a similarly small association for race – non-white respondents were in fact less likely to be anti-union, but only by 1-2 percentage points.  Neither variable was statistically significant at any conventional level.

Finally, in the graph below, I present the slope for age. The line represents the actual predicted probability of being “anti-union” (not the change, as in the first graph) by age, again controlling for all the other variables in the model (remember that the probabilities apply to only one point in the distribution, in which all other variables besides age are at their means).  There is a rather dramatic difference between the youngest respondents (with a predicted probability of being anti-union of around 15 percent), and the oldest respondents (whose odds of having “hardly any” union confidence are over 50 percent). This relationship persists (with only slightly-diminished strength) if I limit the sample to employed people only. 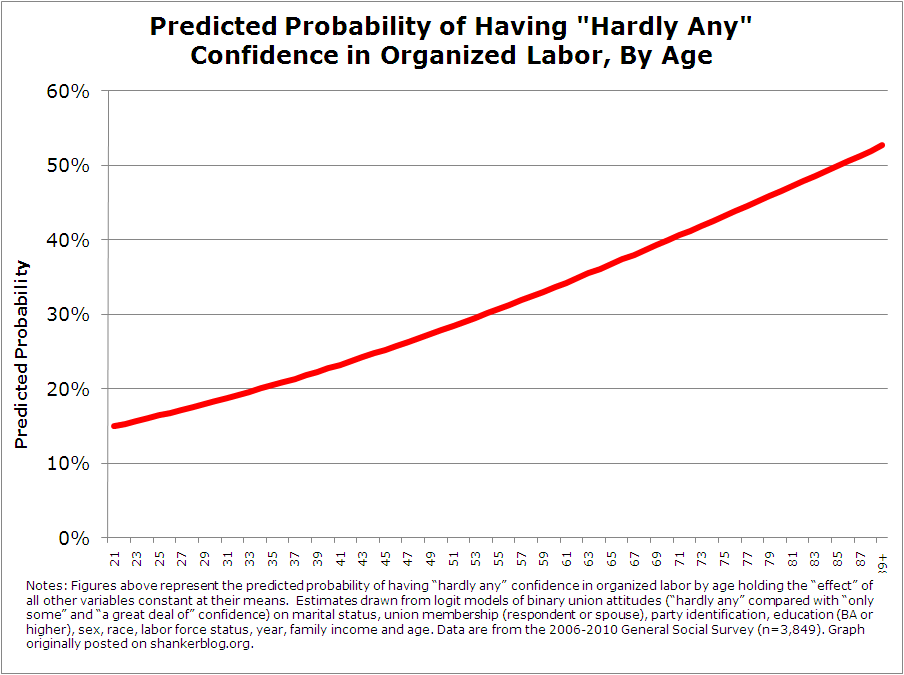 As always, it is a bit difficult to separate the "effect" of age from that of being born in a different time (i.e., cohort effects). For example, older Americans today may be more or less likely to oppose unions than were older Americans in the past, which would mean that part of the difference shown in the graph isn’t so much chronological age, but rather the era when one was born. It's also possible that the "age effect" is not linear. In any case, the relationship appears strong, and may bode well for unions over the next couple of decades, when a large segment of the U.S. population – baby boomers – will be aging out of the workforce.

Overall, though, as is so often the case with analyses of attitudes, the model "explained" only a relatively small proportion of the variation in union opinions. Much of what makes people pro- or anti-union is complex and not easily measured.  Nevertheless, I would say that attitudes towards unions do appear to be influenced by many of the characteristics, such as gender and education, that are “traditionally” associated with political opinions, and the rough pattern that emerges is that more “advantaged” groups (e.g., men, more educated people) are less likely to trust labor unions.

OK, speculation: cranky old males who have already gotten "theirs" and cranky young males who are afraid that someone else will steal "theirs".

I didn't read the original post about your study, but it seems the question you asked might not actually related to being pro or anti-union. If you ask people whose jobs were shipped overseas if they have confidence in unions they may so no, even if they are pro-union and simply with unions were stronger and better able to do more than they currently can.

Thanks for the comment. Very true. I noted in the second paragraph that I was using the term "anti-union" for simplicity's sake. I do think confidence is a half-decent measure of whether someone is "pro" or "anti," but you're absolutely right that this is not necessarily the case.

What's the actual percentage (by age or, say, 10-year-age groups if N is too low) of people answering 'hardly any confidence'?