Who Has Confidence In U.S. Schools?

For many years, national survey and polling data have shown that Americans tend to like their own local schools, but are considerably less sanguine about the nation’s education system as a whole. This somewhat paradoxical finding – in which most people seem to think the problem is with “other people’s schools” – is difficult to interpret, especially since it seems to vary a bit when people are given basic information about schools, such as funding levels.

In any case, I couldn’t resist taking a very quick, superficial look at how people’s views of education vary by important characteristics, such as age and education. I used the General Social Survey (pooled 2006-2010), which queries respondents about their confidence in education, asking them to specify whether they have “hardly any," “only some” or “a great deal” of confidence in the system.*

This question doesn’t differentiate explicitly between respondents’ local schools and the system as a whole, and respondents may consider different factors when assessing their confidence, but I think it’s a decent measure of their disposition toward the education system.

First, let's see the distribution of responses overall, as presented in the graph (I limited the sample to respondents 25 years or older). 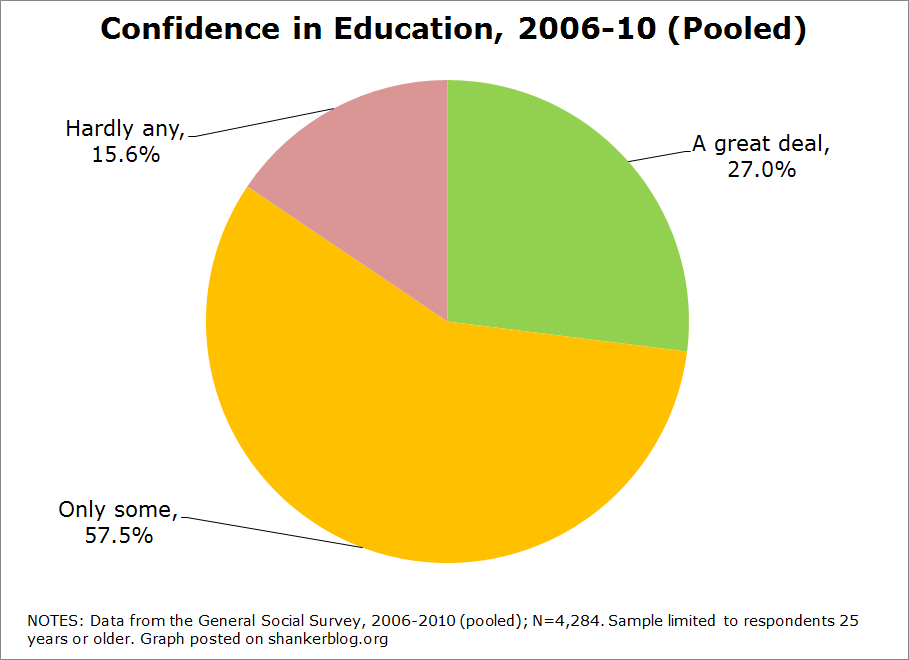 Only a small slice of Americans (about 16 percent) express “hardly any confidence” in U.S. education, while roughly one in four (27 percent) say they have “a great deal." But most respondents (58 percent) take the middle road – expressing “only some” confidence. On the whole, the majority of Americans have at least moderate confidence in the school system.

Now, let’s break this down by a small selection of core characteristics, as in the graph below. 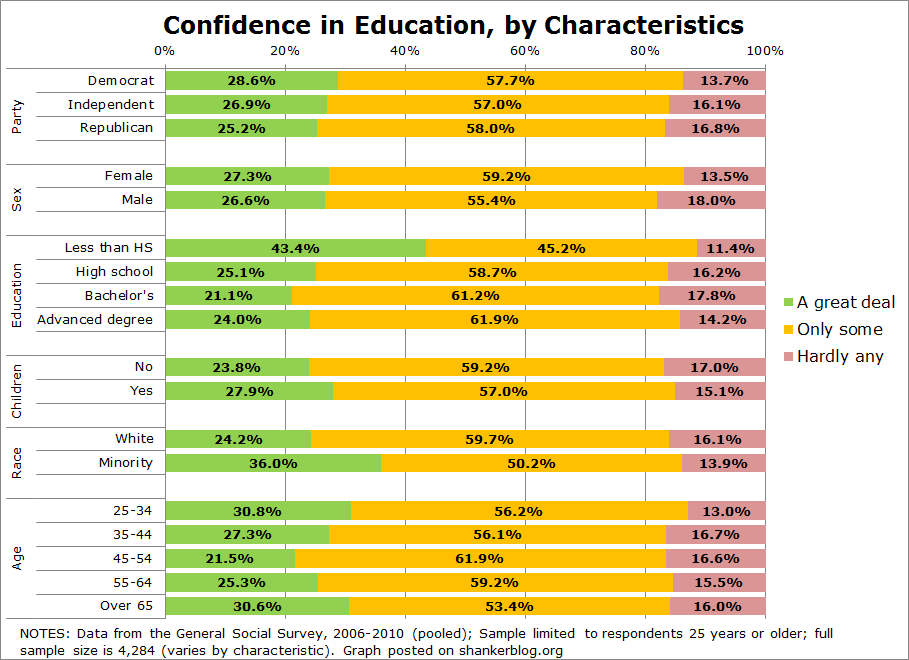 This figure is a bit bulky, but when you eyeball it, you’ll notice that there aren’t many stark differences between these groups (remember that these are smaller samples, and so there’s more noise in the estimates). Somewhat surprisingly, Democrats, Republicans and independents don’t vary too much in their views, and the same goes for men and women, and people with and without children.*

Moving down to the very bottom of the graph, which presents the breakdown by age, the differences are very modest, but the relationship appears to be non-linear. Faith in the system is highest among the youngest and oldest cohorts, and lowest toward the middle (as always, there are age/cohort issues here).

Although the lack of differences between subgroups is the most noteworthy feature of these simple tabulations, one thing that also stands out is the relatively high confidence levels from the least educated respondents – those without a high school diploma. About 43 percent of this group expresses “a great deal” of faith, compared with 20-25 percent among other groups. Similarly, confidence is significantly higher among minorities (36 percent) than among white respondents (24 percent).

In a future post, I hope to take a closer look at these results by fitting some models, as these characteristics are all interrelated. In the meantime, what these data would seem to suggest is that the Americans who are typically viewed as being most poorly served by the education system – e.g., high school dropouts and minorities – seem more likely to exhibit high levels of faith in that system.

* The wording is as follows: I am going to name some institutions in this country. As far as the people running these institutions are concerned, would you say you have a great deal of confidence, only some confidence, or hardly any confidence at all in them – Education?

** As would be expected, a more disaggregate breakdown by party affiliation shows that "strong Republicans" are significantly different from "strong Democrats," but the discrepancies are not as large as one might expect. In contrast, when you ask respondents to identify as liberal or conservative, there is a huge uptick in the proportion expressing "hardly any" confidence among people identifying as "extremely conservative."