Why Do Most Americans Support "Assistance To The Poor" But Oppose "Welfare"?

Politicians and other public figures spend a great deal of resources – time and money – on crafting their messages so as to elicit a desired response. A famous example is the effort to relabel the estate tax as the death tax – the former conjures images of very wealthy people paying their fair share, whereas the latter obscures this limited applicability, and invokes outrage at being “taxed just for dying."

As everyone knows, words matter, and these efforts pay off. You don’t need to look at the results of too many surveys or polls to realize that people respond very differently depending on what you call something or how you describe it (e.g., see this post on attitudes toward teacher tenure).

One other particularly interesting – and important – example of this description-based divergence of attitudes toward social programs for the poor.

The graph below presents the simple distribution of responses to two questions about government programs for low-income families. The data all come from the same survey – the 2010 General Social Survey, and both questions ask whether people think we spend too much, too little or about the right amount on programs for the poor. But they use different wordings. One group is asked about spending on “assistance to the poor," the other about “welfare." 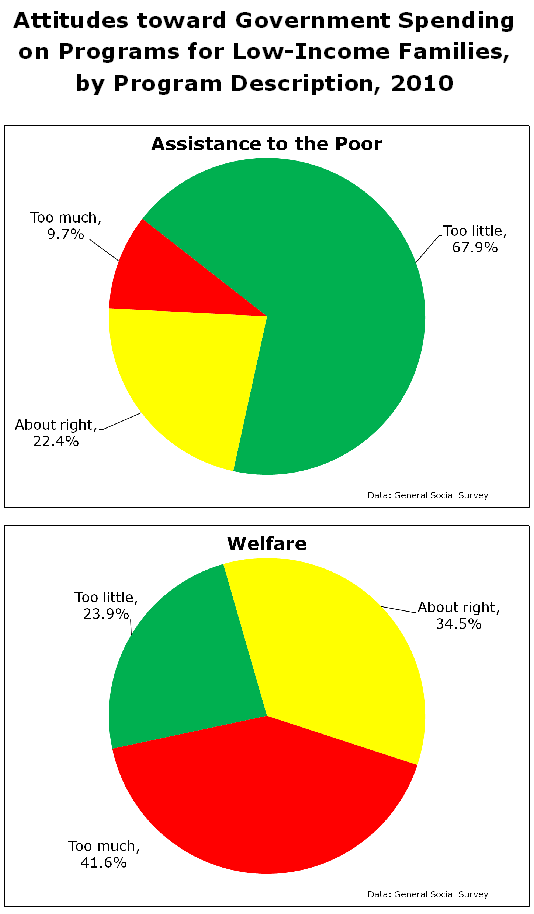 There is strong support for increasing spending on “assistance to the poor” – two-thirds of respondents think it’s too low, while only about one in ten feel spending is too high.

Call it “welfare," however, and the situation is basically reversed. Only one one-quarter of respondents want to spend more, while two in five say expenditures are too high.

The fact that Americans tend to oppose “welfare," but support “assistance to the poor” is a little perplexing, since it’s fair to say that most people know that the latter is a description of the former.

It is, of course, no secret that the term “welfare” has negative connotations among many in the U.S., even though the program most people think about, Temporary Assistance for Needy Families (formerly AFDC), represents only a tiny fraction of the U.S. welfare state.

It’s also possible that at least some people believe (correctly) that “welfare” is only one example of a program providing “assistance to the poor." In other words, perhaps they support other types of assistance, such as public housing and food stamps (though, once again, all of these programs are technically part of the welfare state).

In any case, one cannot overemphasize the importance of communication, as well as the fact that it cuts both ways. On the one hand, it’s a good thing for public messages to be clear and concise enough for most of the public to understand. On the other hand, however, these messaging efforts too often reflect a lack of understanding, one which might be “exploited” for political purposes (the “death tax” being a perfect illustration).

Maybe – just maybe – if more people were told that most of the funds allocated to “welfare” (TANF) are spent on non-cash benefits like child care and job training, or that anti-poverty programs are highly effective and failing now when they're needed more than ever, they might be more likely to acknowledge that “assistance to the poor” and “welfare” are the one and the same.

At first I thought it might be of interest to look at the average of the two since they results came from the same survey. After more thought on the issue I have decided that the true result of the comparison made in the article is really a statement of the ability of the respondents to think objectively, deeply, and quantitatively. I ended up wondering what was lacking in their education, such that they have diminished ability to discern the full context of the survey question. Drawing a full and complete conclusion from two simple questions is more than a bit self serving -- as the article demonstrates.