Teacher turnover – the rates at which teachers leave the profession and switch schools – is obviously a very important outcome in education. Although not all turnover is necessarily a “bad thing” – some teachers simply aren’t cut out for the job and leave voluntarily (or are fired) - unusually high turnover means that schools must replace large proportions of their workforces on an annual basis. This can have serious implications not only for the characteristics (e.g., experience) of schools’ teachers, but also for schools’ costs, cohesion and professional cultures.

According to the most recent national data (which are a few years old), annual public school teacher turnover is around 16 percent, of which roughly half leave the profession (“leavers”), and half switch schools (“movers”). Both categories are equally important from the perspective of individual schools, since they must replace teachers regardless of where they go. In some subsets of schools and among certain groups of teachers, however, turnover is considerably higher. For instance, among teachers with between 1-3 years of experience, turnover is almost 23 percent. Contrary to popular opinion, though, the relationship between school poverty (i.e., free/reduced-price lunch rates) and turnover isn’t straightforward, at least at the national level. Although schools serving larger proportions of lower-income students have a larger percentage of “movers” every year, they have a considerably lower proportion of “leavers” (in part due to retirement).

This national trend, of course, masks considerable inter-district variation. One example is the District of Columbia Public Schools (DCPS).

According to data released last year (via Steve Glazerman), which applies to the 2011-12 school year and is summarized in the table below, DCPS loses about 25 percent of its teachers every year. The vast majority (about 19 percent) of those are “leavers." 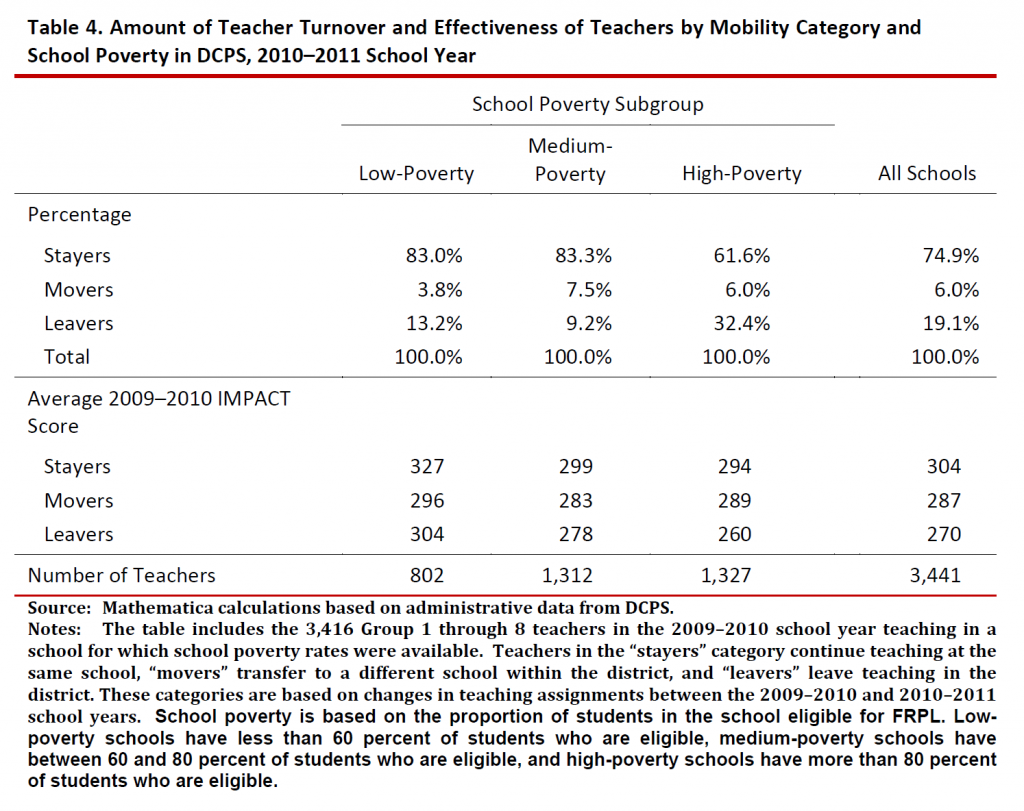 (Bear in mind that these 2010-11 DCPS figures are not directly comparable to the national data cited above. For instance, the national data apply to 2008-09, and include part-time teachers. Also, the administrative datasets upon which the DCPS estimates are based cannot differentiate between “leavers” who leave the profession entirely and those who simply leave DCPS because they got a job in a different district [including, perhaps, a DC public charter school]. Still, once again, the mover/leaver distinction is somewhat trivial from the standpoint of a school, which must replace a teacher regardless of where they go.)

One of the most salient features of the table is the rather startling discrepancy in DCPS turnover rates between schools with low-to-medium poverty rates and those with high poverty rates (in the table above, high poverty schools are those with greater than 80 percent FRL). Whereas turnover rates are roughly 17 percent in low- and medium-poverty schools, they are a somewhat stunning 38.4 percent in high-poverty schools. To the degree these figures do not fluctuate between years, this means that this subset of schools must replace, on average, almost two out of five teachers every single year.

Now, it’s important to note, first of all, that this level of churn, overall and/or in how it varies by school poverty, may not be unusual for districts similar to DCPS (for example, the overall rate of 25 percent is probably roughly comparable to other big city districts). In other words, this may be less a DCPS problem than a large urban district problem (and the raw figures certainly cannot be chalked up to specific policies, in DC or elsewhere).

Moreover, it's unclear how much of the discrepancy in attrition/mobility by poverty rates is due to working conditions per se. For one thing, as seen in the DCPS document linked above (see page 36), teachers in higher-poverty schools receive lower ratings, on average, from DCPS’ teacher evaluation system than their counterparts in medium- and low-poverty schools, which means that some of the turnover may be involuntary (i.e., dismissals). Also, leavers and movers have lower evaluation scores, on average, than stayers (see the table above, and also that on page 32). Similarly, there are other variables, such as experience, that may mediate the association between school poverty and teacher turnover.

In any case, while some turnover is inevitable and some of it (e.g., low-performing teachers) can be seen as beneficial, the situation in the highest-poverty DCPS schools, where around 40 percent leave every year, is at least a cause for concern. It’s difficult to comprehend how schools can function effectively under such conditions.

My read of that NCES report is that the variation in churn by school poverty - to the extent that FRPL eligibility works as a proxy for poverty - in DC actually *is* unusual. On pg. 8: 15.6% of teachers in schools with 75+% FRPL are movers/leavers, which is not very different from the 13.5% in the most affluent schools. (Churn rates are actually highest - by a bit - in schools in between those extremes.)

Idea for a phd candidate. Lots of talk of changing student discipline policies, driven by USDOE and others. Whether the change is "reforming mindless zero tolerance" or "allowing disruption with no real consequences" is in eye of beholder. But it'd be interesting to examine whether districts which go in this direction also raise or lower their teacher departure rate.

a. The table shown above is at least to me, something to be expected. As a soon to be first year teacher myself, I think that new or young teachers might have a romantic notion of teaching in a higher poverty level school or school district. Hollywood has glamorized the skills it takes to work with students, faculty members and parents/guardians of those children living and working in high poverty areas. Some first year or newer teachers might not fully comprehend what it takes to be an exceptional teacher in this type of environment. So much is to be said to those teachers who are able to continue to teach and provide high quality education to those students who so desperately need it.
b. I think another area of concern with the high volumes of teacher mobility is the lack of truly highly qualified teachers. Teachers should be highly qualified in the area they teach and should show through his or her teaching and evaluations that they can provide instruction that challenges and motivates their students. During my master’s level instruction, we are taught to scaffold instruction to best suit our learners specific and unique learning styles and comprehension levels. If newer teachers are unable to do this, this might lead to frustration, low evaluation scores, and perhaps even a move to a different school. Educating our children is no easy task, and perhaps the frustration that comes with the job might be too overwhelming for some first year or novice teachers.

Hey Matt D.
It's your old buddy Eric Sternberg.
I am a teacher now living in New Jersey. How goes it?

According to http://en.wikipedia.org/wiki/District_of_Columbia_Public_Schools, a strong majority of student attend charter schools in DC. Another source indicates 41% of schools are charter: http://www.takepart.com/photos/charter-schools/2-district-of-columbia-p…. Whether one or both are right, it's a high number of charters.
With charters ability to fire/hire (and a steady supply of TFA recruits), it doesn't seem surprising then that turnover is so high.

What is interesting to note is that the percent of movers in medium poverty is higher than the percent of movers in high poverty. Also the percent of leavers in low poverty is higher than the percent of leavers in medium poverty. There doesn’t seem to be a direct link between poverty level and movers/leavers based on this data. If there were a direct link, I would expect the largest percentage of movers and leavers to be from high poverty schools while the lowest percentage would be from low poverty schools. I would be most interested to find out the percent of the leavers who were leaving not by choice. With teacher evaluation such an integral part of contract renewal, teachers who cannot manage the classroom might be more likely to score poorly. In many cases, the higher poverty schools are more difficult to manage. However, based on my experience, the biggest issue in teacher turnover is burnout. Teachers are inundated with so many responsibilities. When you add in the baggage that comes with students who are from high poverty, many teachers cannot take the pressure. As stated, it would also be interesting to determine where these movers and leavers are going. Do the burnt-out teachers go to “easier” charter schools or private schools with choice in students? Or do they decide that teaching is not for them and go into another field? Obviously there is a problem, but before the problem can be fixed, more information is needed.

When I think of teacher turnover, I automatically think of teachers being burnt out. Teachers are being required to do so much extra work that it becomes completely overwhelming at times. However, I found it interesting to look at the data for teacher turnover based on the poverty rates. I found it interesting that more teachers left the schools with medium poverty rate versus the high poverty rate. Being at a school with a high poverty rate can be more stressful than some people can imagine. In my experience in teaching students living in poverty, I have felt that I needed to be an even better teacher for them because getting a good education may be their only way out of poverty. You want to give those students more than your best effort. With that added stress and the behaviors that most schools in high poverty have, I can understand why teachers may not be cut out for the job or choose to move to a school with a lower poverty rate. I think that in order for them to get a better understanding of how to solve the turnover problem, they need to collect more data. Why are teachers leaving? Where do they go when they leave? Do they retire or go into another profession? If they transfer to another school, what type of school do they transfer to? These are some questions that I think the answers would be beneficial to finding answers to the teacher turnover rate.

Thanks for the hat tip, Matt. My colleague Elias Walsh did the analysis you excerpted. It's pretty interesting stuff and worth a read, although it's just an interim report in a series being done on DC school reform for the city on behalf of the National Research Council by DC Ed-CORE (Education Consortium for Research and Evaluation). Ed-CORE plans to wait for the final report, which will encompass several years together, to really publicize the results of this effort. These interim reports are public and can be found on the DC Auditor's website.

I saw an article on Yahoo! where a teacher was leaving because of the cheap healthcare she could get. Her idea was to start her own business. I am not sure how effective she was in her job, but it is sad that she was a teacher only for health insurance coverage.